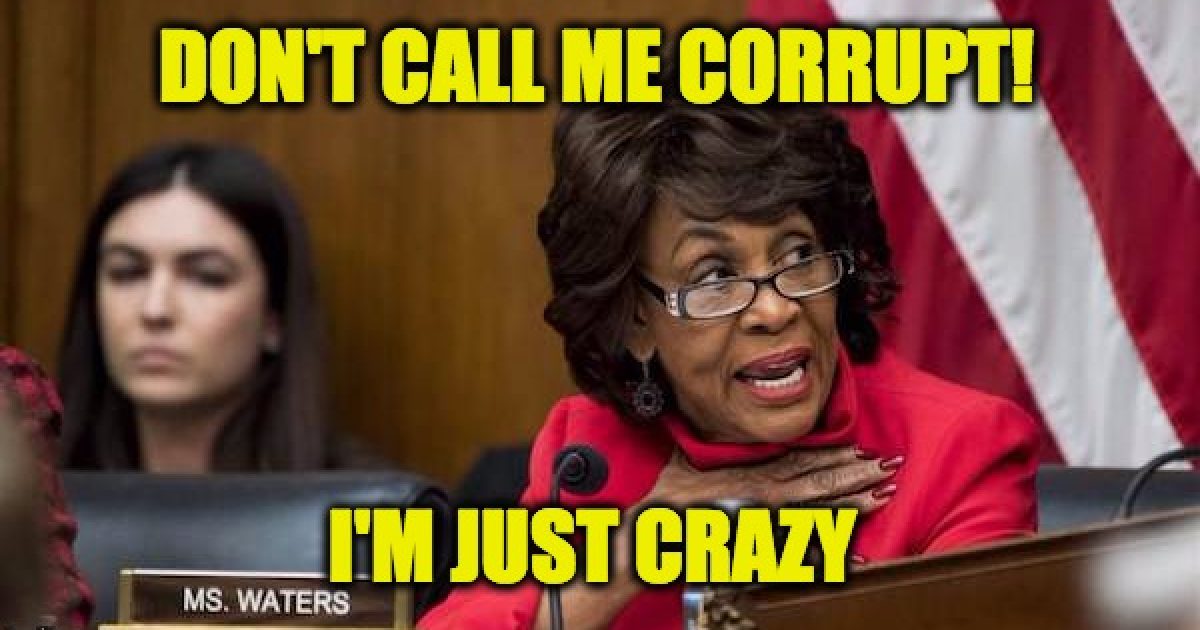 Andrew Johnson was impeached after being accused of violating the Tenure of Office Act.

Bill Clinton was impeached after committing perjury, he lied to a grand jury about his extramarital affair with Monica Lewinsky (depending what is….is).

Now Mad-Maxine Waters, twice honored as the most corrupt person in Congress is arguing that President Donald Trump should also be impeached. His crime? Tweeting about the NFL and defending the honor of the United States and the heroes who put their lives on the line to protect her citizens.

The congresswoman in question is Maxine Waters of California, who has been on a daily crusade to impeach Trump since before he took the oath of office has amassed an impressively massive dossier of nonsensical reasons for ousting the current commander in chief, including her recent “guarantee” that is actively colluding with Russia against the U.S.

Waters, who herself has been named one of the most corrupt members of Congress, was on MSNBC to make her case that the president’s tweets denouncing national anthem protests by NFL players add up to an impeachable offense.

Auntie Maxine sets the stage for the trial she imagines by noting that Trump’s objections to kneeling are racist.

He’s pointing now to the NFL. We know that the majority of these players are African American and we know what he is doing. We’re not tricked or fooled by him in any shape, form or fashion.

She is correct that the majority of NFL players are black — 68% of them, to be precise. It is interesting that Waters and fellow liberals don’t find that blatant racial imbalance problematic. Presumably, they would argue that jobs in the NFL are awarded on the basis of merit — a policy they find loathsome when the ethnicities are flipped around.

So what are Waters’s specific grounds for impeachment? Let her tell it:

“Here he is strongly criticizing, you know, football players, uh, the NFL players,” Waters sputters before concluding that “he should not be the president of the United States of America and we gotta’ get ready for impeachment.”

Waters is like a WWE wrestler. Not the impressive superstar kind who knows the nuances of her craft. Rather, she is the undercard performer who has been given one lone gimmick to run with, say his catchphrase for the crowd before the match only to fail big time.

Hell, Waters is even willing to screech about impeaching the President at a funeral.

And now a new day brings new calls for impeachment, all because President Trump is demanding respect for the national anthem by NFL players.

“He is about division,” Waters argues. “He is about signaling to that core group of his that this country that he wants to make great again is all about making it white.”

When do her colleagues plan to censure this woman who is, on a daily basis, disgraces the institution of Congress?

Crossposted With The Mental Recession