New Evidence Of His Crapping On Voters Strategy 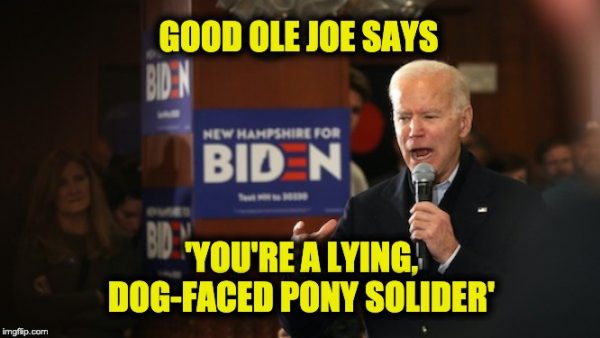 Joe Biden really knows how to motivate people to vote for him.  He seems to be using a strategy of slamming potential voters. Like the time he exploded at a retired Iowa man named Merle Gorman calling him a damned liar, and fat while challenging him to a push-up contest. Another time he told a different Iowa voter to go vote for someone else. In South Carolina, he told Carlos Rojas to go vote for Trump, Campaigning in North Carolina in December Biden suggested that a climate activist vote for someone else. The pressure of his lousy showing in Iowa and his low polls in New Hampshire must be getting on good ole Joe’s nerves. On Sunday, Biden lost control. He flipped out at a prospective New Hampshire voter harsher than normal, calling her a “lying, dog-faced pony soldier.”

The insult came after the voter named Madison asked Biden, “How do you explain the performance in Iowa, and why should the voters believe that you can win a national election?”

“Good question,” Biden answered, “Number one Iowa is a Democratic caucus. Ever been to a caucus?” Biden asked. Madison responded that she had. “No you haven’t, you’re a lying, dog-faced pony solider. You gotta be honest,” Biden responded, ridiculing Madison as the rest of the crowd laughed at her.

After a New Hampshire voter asks @JoeBiden why they should trust he can turn his campaign around, he asks if she’s ever been to a caucus before; when she says yes, Biden snaps: "No you haven’t. You’re a lying dog-faced pony soldier." pic.twitter.com/3uxOAu0Ues

I don’t even know what a lying dog-faced pony soldier is but it sounds bad ?

Gotta wonder why he said pony instead of horse. Is it because he likes sniffing the hair of smaller humans? #creepyjoe

But Brat, when Trump does it, it’s very different because he is a Republican and the MSM hates him.

I agree with you. I’m dealing with a mom with dementia right now and it’s heartbreaking. But I see many similarities. It’s sad.

I really wish “someone” would put together a compilation of all the voters Joe has attacked recently. @CarpeDonktum

His audience had a laugh at her expense.

He might be about to try, but I got ten bucks on her.

Joe Biden used the line before, in 2018 just before he asked union thugs to beat up North Dakota Rep. Kevin Cramer. He claims that his brother got the line from a John Wayne movie.

Either way, it seems that Joe is campaigning differently than the traditional campaigns of presidential wannabes. However, based on the results and the polls so far, crapping on potential voters does not seem to be working.