Video: Lyin’ Joe Biden Claims He Told Dem Governors Not To Endorse Him

He Claimed if They Do, 'You Won’t Get What You Need From The Government’ 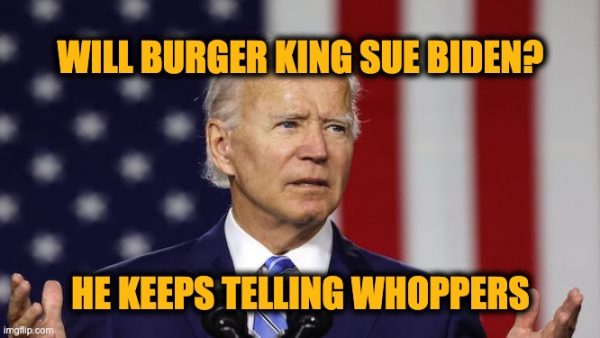 While participating in a virtual town hall with Amalgamated Transit Union in Wilmington, Delaware on Saturday, lying Democrat White House candidate Joe Biden claimed he told some Democrat governors not to endorse him. Biden claimed that if they did support him, they might not receive what they need from the federal government in terms of COVID relief. Lyin’ Joe Biden

“I probably shouldn’t say this. … I told some governors, don’t endorse me … because you’ll pay a penalty,” he said.  “You won’t get what you need from the federal government in terms of this COVID crisis.”

“Not a joke, my word,” he added. “We aren’t blue states and red states; we’re the United States.”

He also had one of his signature meltdowns.

Of course, there’s not a shred of evidence to suggest the federal government will withhold aid from states governed by Democrats who support Biden. Still, he doesn’t really need any proof other than what resides in his cranium since he’s spent his entire political career lying about one thing or another.

The only conclusion anyone with a fully-functioning brain cell can make is that Joe Biden is a pathological liar who lies about everything all the time.  If we had a real media in America instead of a gaggle of willing left-wing propagandists, chances are, Biden would’ve been sent packing to a retirement home long ago.

Below is the video:

Joe Biden: "It is what it is? — It is what it is because they are who they are… We can change this I promise you on day one I will." pic.twitter.com/JGVuNO5UFz

At a virtual town hall with Amalgamated Transit Union in Wilmington, Delaware on Saturday, Lyin’ Joe Biden claimed he told Dem. Governers not to support him