Louise is one sexy chick in her mustache and armband,ay?
I Just love a sexy Canadian Nazi Girl in Uniform 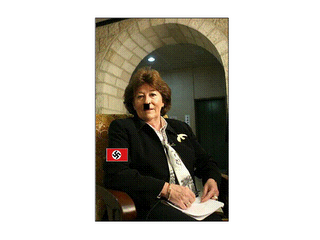 Israpundit Says Louise’s heart may be in the right place but her head isn’t !

Arbour has her head up her ass

“In one case you could have, for instance, a very objectionable intent – the intent to harm civilians, which is very bad – but effectively not a lot of harm is actually achieved,” she said. “But how can you compare that with a case where you may not have an intent but you have recklessness [in which] civilian casualties are foreseeable? The culpability or the intent may not sound as severe, but the actual harm is catastrophic.” According to criminal law, “there is very little distinction between recklessness and intent,” she said. “It is a small distinction as to whether you desire the result, or you foresee it as virtually certain and you do not care. In terms of culpability there is not a lot of difference between recklessness and intent.”
Arbour indicated that this could mean that Israel was guilty of human rights violations for its actions in Lebanon.

What Arbour ignores is the distinction between criminal law and War Crimes law. The former definitely criminalizes conduct exhibiting “reckless disregard” resulting in death of others while at the same time allows policemen to kill if their lives might be in danger even if such action exhibits “reckless disregard”. Similarly international law allows you to pursue military objectives even if bystanders are killed. It also allows you to fire on combatants hiding among civilians and even blames the resulting deaths on the combatants who are so hiding. The latter action is considered a war crime.

She had similar things to say at beginning of the Lebanon War.
At that time Alan Dershowitz took her to task and concluded Arbour must go,

International law is not quite as silly and one-sidedly against democracies as Arbour makes it out to be. Military targets located in cities can be attacked so long as reasonable efforts are made to minimize civilian casualties. Indiscriminate carpet bombing of cities with no military targets is prohibited, except possibly in instances of belligerent reprisal for attacks on one’s own cities. In fact, the entire system of nuclear deterrence that prevented the Cold War from turning into a nuclear conflagration was based on mutual threats of belligerent reprisals — i.e. if the Soviet Union bombs New York, The United States will bomb Moscow. Current international law fails to answer the following questions: What is a democracy supposed to do when a terrorist enemy — sworn to its genocidal destruction — launches anti-personal missiles designed to maximize civilian casualties, and launches them from civilian population centres? Are they supposed to simply do nothing and let the missiles rain down on their own cities? Are they supposed to send in ground troops, as Israel did in Jenin, with considerable loss of life on both sides? May they conduct air attacks targeting the missile launchers or the terrorists and their arms depots, even though some civilians will “foreseeably” be killed?

Don’t miss the rest of Dershowitz’s critique of international law.

Judge In Maricopa County Says Senate Subpoenas For Election Materials Is Both ‘Legal And Enforceable’
February 26th, 2021 The Political Cowboy