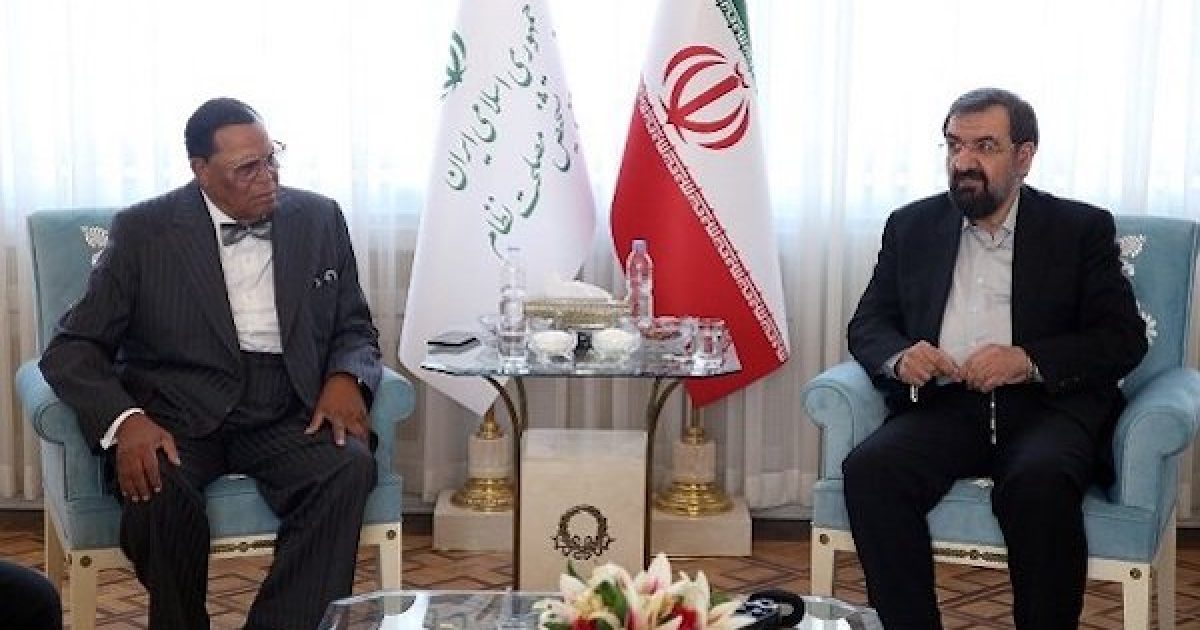 Crawling out from under a rock in a swamp, scumbag and Democratic Party favorite Louis Farrakhan visited Iran where he led chants of “Death to America,” and “Death to Israel” during a speech in Tehran.

The anti-American, anti-Semitic  Farrakhan flew to the Middle East recently to display support America’s enemy, Iran on the 39th anniversary of 1979 US embassy takeover on November 4 and the day before the reimposition of US sanctions against the rogue regime.

Farrakhan also gave a speech during a meeting with the Secretary of Iran’s Expediency Council Mohsen Rezaei in which he claimed America is constantly conspiring against Iran, per the Jerusalem Post.

In his speech in Tehran, Farrakhan said he was enjoying his visit to Iran and that “I am here to show my friendship” with the Iranian people. He also warned Iranians against “American plots” against the Muslim world.

“The American government is plotting against you every day,” Farrakhan said, saying he knew of American plans to attack and occupy seven Muslim nations. “Because it is impossible to change the way of thinking of Islamic Iran, they never sleep and are always working to create an internal enemy in Iran.”

He added “I understand how the enemies have plotted against the Iranian people and I would like to stay alongside you to stop their plots,” he asserted. And “Satan seeks to divide Muslims and wants them to kill each other, while God tells us in the Quran to be united.”

The hate monger also spoke to students at the University of Tehran law school (in Farsi) according to the Islamic Republic of Iran News Network (IRINN) his venom included:

“The American government is plotting against you every day,” Farrakhan said, saying he knew of American plans to attack and occupy seven Muslim nations. “Because it is impossible to change the way of thinking of Islamic Iran, they never sleep and are always working to create an internal enemy in Iran.”

Farrakhan also referred to the killing of Saudi journalist Jamal Khashoggi and to Trump and his Jewish son-in-law Jared Kushner’s involvement in Saudi affairs.

“Trump cannot clear his account with Muhammad bin Salman because of the killing of Khashoggi,” he said, “because of the large amount invested in the Saudis and the interest that Trump’s son-in-law and his family have in the country.”

“Israel has taken very clever steps in Abu Dhabi, and wants to gain control over Muhammad bin Salman,” Rezaee added, “but the Khashoggi affair has foiled their plans.”

“When I met Saudi Prince Bandar bin Sultan al-Saud at the Saudi Embassy, I asked him why there are American troops in the holy places [Mecca and Medina],” Farrakhan added. “He assured me that we have a treaty stating that any time we want, we can remove the Americans. I told him that treaties have not stopped the Americans in the past. They also had treaties with the Native Americans, which were never honored.

Memri grabbed the video of part of Farrakhan’s speech:

This supposed American travels to an enemy state and grants aid and comfort to that enemy…shades of Jane Fonda.  Even when in the US Farrakhan is trashing the nation which gives him wealth and freedom. In the past, he has said things such as The CIA Created Ebola and Aids To Kill Off Black People, Your Record America Stinks In The Eyes of God, 9/11 was Fake America Was Looking for a New Pearl Harbor, and much much more.

At the same time, Farrakhan is one of America’s leading anti-Semites, saying Fake Jews In US Forcing Govt. To Oppress Muslims -No Proof Osama Led 9/11, he blamed Blame Fort Hood Shooting on The JEWS. This past March during his annual founders day speech,  he said

(…)“White folks are going down. And Satan is going down. And Farrakhan, by God’s grace, has pulled the cover off of that Satanic Jew and I’m here to say your time is up, your world is through.”

But making matters worse Farrakhan is supported by some members of the Democratic party in the US. And the ones who don’t support him are silent. As they say in Italian “Chi tace acconsente,” silence means consent.

Pictures and video released earlier this year, revealed that former President Obama and other Democrats including Maxine Waters (D-CA), Al Green (D-TX), Barbara Lee (D-CA), and seventeen other Democratic members of Congress had very friendly meetings with racist, anti-Semite Louis Farrakhan. The Deputy Chairman of the Democratic Party Keith Ellison had a closer relationship with the bigot whose hatred’s been displayed throughout his long career.

The video below is from 2005 when 21 Democratic members of the Congressional Black Caucus met with the hate-monger Farrakhan,

Farrakhan’s hatred isn’t the only issue.  Whenever a bigoted nut-job announces support of President Trump, Democrats, and the mainstream media rush to interview every Republican they can find, “why won’t the president denounce—?” David Duke and the Charlottesville Neo-Nazis were only two of the many examples of this behavior.

When the friendship between the America and Jew-hating Farrakhan and members of the Congressional Black Caucus was revealed  Chicago Democratic Congressman Danny Davis told a reporter that people need to get over “the Jewish question” and said he would not apologize for being friends with Louis Farrakhan, the anti-Semitic and racist Nation of Islam leader who Davis characterizes as an “outstanding human being.”

Davis added that people need to get over “the Jewish question.”

“That’s just one segment of what goes on in our world,” Davis told the DC. “The world is so much bigger than Farrakhan and the Jewish question and his position on that and so forth. For those heavy into it, that’s their thing, but it ain’t my thing.”

The Chicago Democrat told the DC that he is friends with Farrakhan and sees no reason to apologize for that.

Outstanding human being?  I wonder if Chuck Schumer or Nancy Pelosi agree with him? Probably not because hatred of the Jewish people has become a staple of the Democratic party. Neither Schumer, Pelosi or any other Democratic Party leader has comment on the party’s friendship with Farrakhan or the their leap toward Antisemitism. That’s because no one in the biased MSM will ask. Sometimes media bias has nothing to do with what reporters say, but what they don’t ask.