There is no other way to put it, Louis Farrakhan is an cockroach, a blight upon the earth, a boil upon the arse of humanity. I thought we were done with this man of hate. Three years ago he gave what he said was his last public speech, but he still finds a way to crawl out from under a rock  and spew his hateful venom at the rest of the world. 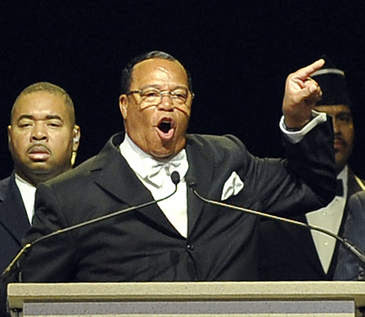 While some of us were were watching the boring Oscar telecast, the Head Cockroach of the Nation of Islam was delivering his big four-hour “Saviour’s Day speech to his flock. Proving that birds of a feather flock together, Farrakhan said  Libyan strongman Moammar Gadhafi “has always been a friend and he won’t distance himself from” him. He defended Gadhafi saying no leader has been loved by 100 percent of his people and said that if Gadhafi is persecuted for crimes against humanity, the same should apply to former President George W. Bush for the wars in Iraq and Afghanistan.

“What you are looking at in Tunisia, in Egypt, in Yemen, in Jordan, in Libya, in Bahrain will soon, very soon be in all the nations of the world . . . and even sooner take place in America.

“What you see happening there, you’d better prepare because it will be coming to your door, America.”

Some of his other “ditty’s” included:

He said the church’s founder L. Ron Hubbard had a mission to “civilize white people,” adding that Hubbard “is so exceedingly valuable to every white person on this earth.”

Scientology books were available for sale at the Savior’s Day event, but Farrakhan said he was not converting and did not need a new religion.

His speech also covered familiar topics from previous Savior’s Day events, including a focus on the common beliefs of Christians and Muslims who he said “should not be at war with one another,” how the Nation of Islam believes that white people were created from blacks 4,000 years ago on an Aegean island by a black scientist, and on problems affecting the black community, including street gangs.

He also criticized the sexually charged performances of popstar Rihanna, saying they were “filthy” and that people who enjoyed such antics were “swine,” a description he also applied to homosexuals and lesbians. He also criticized immigrant Muslims in the Chicago area for moving to white suburbs and being patronizing toward black Muslims.

And of course he went after his favorite target….the Jooose. He said that part of the observance of Black History Month should be lessons on how the Jews took advantage of black people.

Typical because this SOB has been inciting hatred against Jews his entire life.  The nicest thing he ever said about the Jews was Judaism is a gutter religion. In recent history,  Farrakhan crawled out from under his rock it to blame the death of Michael Jackson on the Jews, then , the Jews turned Major Hasan into a killer.

Last year the Prophet of Hate out did himself, as reported on the Nation of Islam website, Farrakhan preached that the Jews were not the Children of Israel, American Blacks were, Jews just use their monetary power to keep the black man down.

Damn we Jews are very good. One part I don’t understand, how exactly did the Jews fool the Lord into thinking we were the children of Israel instead of American Blacks. You know, with God being….well GOD and possessing that all knowing and all seeing thing, exactly how did we pull that off.

Farrakhan calls himself a man of God. Its hard to believe that God would want to work with such a slug, who promotes hatred and venom in the world.  One can only pray that next time he tries to get out from under the rock, he finds it too heavy to escape.