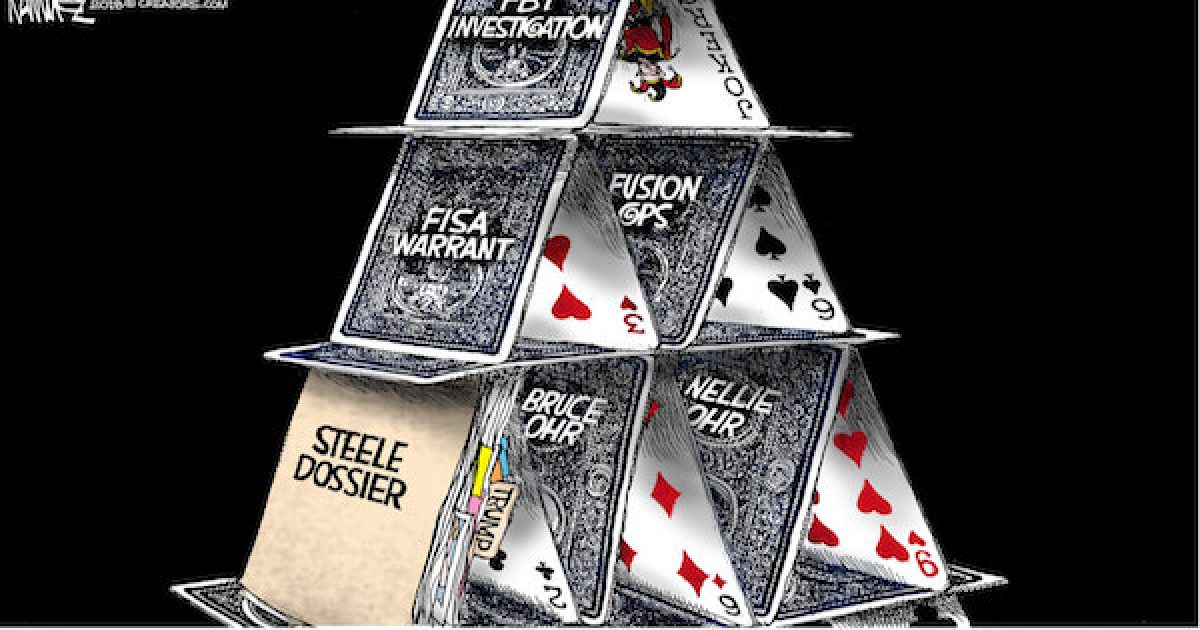 When Lisa Page, the former FBI attorney and half the team of anti-Trump FBI Lovers testified before Congress she revealed the FBI had found no evidence of collusion between the Trump campaign and Russia by the time that Robert Mueller was appointed special counsel.  According to Catherine Herridge at Fox News]who got ahold of the transcript of her testimony:

“I think this represents that even as far as May 2017, we still couldn’t answer the question,” Page said.

Page was responding to Republican Rep. John Ratcliffe of Texas, who wanted more information about a May 2017 text where Page, and her then-colleague and lover FBI agent Peter Strzok discussed the merits of joining Special Counsel Robert Mueller’s team.

Page’s boyfriend agreed. Page 405/6 of the Inspector General’s June Report shows Strozok saying he didn’t think there was something to the investigation:

Who gives a f*ck, one more A(ssistant) D(irector)…(versus) (a)n investigation leading to impeachment?” Strzok texted on May 18, according to the IG report. Strzok later continues, “…you and I both know the odds are nothing. If I thought it was likely I’d be there no question. I hesitate in part because of my gut sense and concern there’s no big there there.”

According to the transcript, Rep. Ratcliffe read Lisa Page the entire text exchange ending with the above quote first revealed to the public by I.G. Horowitz asking her to explain if her ex-boyfriend Strzok really believed “the odds were nothing and that he had a concern that there was no big there there regarding any collusion…”

“No, I don’t think so. I think it’s a reflection of us still not knowing…It still existed in the scope of possibility that there would be literally nothing, probably not nothing nothing, as we probably knew more than that by that point. But in the scheme of the possible outcomes, the most serious one obviously being crimes serious enough to warrant impeachment; but on the other scale that, you know, maybe an unwitting person was, in fact, involved in the release of information, but it didn’t ultimately touch any senior, you know, people in the administration or on the campaign. And so the text just sort of reflects that spectrum.”

On “Sunday Morning Futures” Ratcliffe told Fox News’ Maria Bartiromo he interpreted that to mean that Strzok, the lead investigator, had found nothing to suggest collusion.

“I cannot provide the specifics of a confidential interview,” Ratcliffe said. “But I can say that Lisa Page left me with the impression, based on her own words, that the lead investigator of the Russian collusion case, Peter Strzok, had found no evidence of collusion after nearly a year.”

May 2017 is a key month to investigate because that’s when Comey was fired by Trump and Mueller was appointed. Did Deputy AG Rod Rosenstein know there was nothing there before he appointed Mueller? Later in the summer, he allowed the collusion case to become an obstruction case, was that Rosenstein’s real purpose in appointing a special prosecutor?

The IG is supposedly working on another investigation, this one is about how and why the Russia Investigation began. Perhaps that investigation will present some of those answers.

Note: The cartoon at the top of this post was created by my good friend, 2x Pulitzer Prize-winning cartoonist Michael Ramirez. If you don’t read him at his site Michaelpramirez.com, on Facebook, or on twitter @Ramireztoons you are doing yourself a great disservice.
Facebook Twitter Flipboard