Marines Discharged LTC Scheller, But The Fight Has Just Begun

“The Lions Are Home From War” 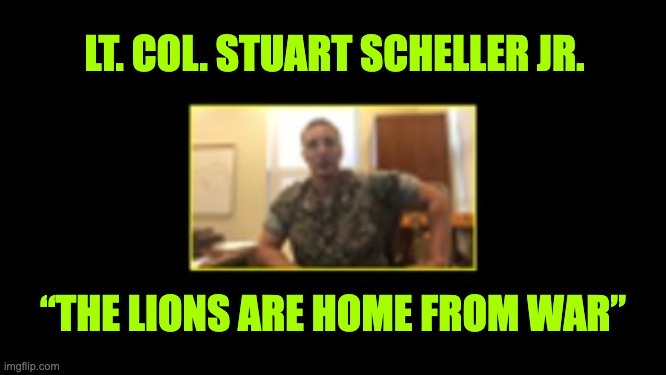 Former Marine Lt. Col. Stuart Scheller Jr. got in trouble when he posted another video criticizing military officials over the way they handled the withdrawal from Afghanistan, saying what many Americans were saying: lions are home from war

“I’m not saying we’ve got to be in Afghanistan forever, but I am saying: Did any of you throw your rank on the table and say, Hey, it’s a bad idea to evacuate Bagram Airfield, a strategic airbase, before we evacuate everyone?’Did anyone do that? And when you didn’t think to do that, did anyone raise their hand and say, ‘We completely messed this up?'”

Scheller was issued a gag order from top brass. But after 13 American service members were killed in an attack in Kabul, Afghanistan, Schiller posed another video demanding accountability from the decision makers. Again, agreeing with much of America

After a lengthy court marshal process, the Marines discharged LTC Scheller as of December 24, but though his thoughts were bittersweet, his resolve has not flinched. Discharged under General but Honorable Circumstances, he will fight on for the country. He has not given an interview under a gag order issued by the military court, but he plans a “media blitz” now that he is out. He also created a new website called Authentic Americans. He stated the Lions are home from the war in a Facebook post. Are they?

It was December 23rd, of 1776. The Americans were fighting for liberty and freedom against an old hypocritical government. Up to that point in the struggle, the Americans suffered a series of defeats. But George Washington, undeterred, mobilized his force for a surprise attack over the holidays. The attack on December 26th wasn’t decisive, but as history shows, it was a turning point in the war.

To recap my series of defeats after demanding accountability; I was relieved of command, slandered as homicidal/suicidal by the USMC’s public affairs team, ordered to get a mental health evaluation, lied about in the investigation by my “friends”, denied my legal right to prefer charges against another service member beholden to the UCMJ, imprisoned under the false pretense of ‘flight risk’, left without basic items in prison for five days, offered a legal deal while held illegally in jail (you can’t be placed in pre-trial for a special court martial), slandered again when my medical records and investigation were released to the media, fined 5K dollars, called a narcissist in my letter of reprimand, kept under a gag order for over four months, denied the ability to request mast twice, given the lowest characterization (General under Honorable Conditions) allowed by the plea deal, and lost my retirement. Was it worth it? Well… unfortunately for them… the war isn’t over. I think we just arrived at a turning point. The old system underestimated US then… and they underestimate US now…

Out of respect to my senior leaders, I haven’t done a single interview since this began. But now it’s my turn. My television media blitz starts with Tucker Carlson on 4 January. Leading up to my TV interviews, I plan to make a post a day up to the date of my interviews starting with the 26th, the day of George Washington’s attack. 2022 is the start of a new year. It’s the start of a new generation. The lions are home from war. And we aren’t assimilating anymore.

The weak and dangerous military leaders: are the lions home from war?

Sec Def Lloyd Austin, in his crusade to purge the military of “extremists,” farmed out the definition of extremism to a Black nationalist named Bishop Garrison on the CEWG (Countering Extremist Activity Working Group). The definition he created gives the military wide latitude to purge the ranks of Conservatives and Christians. “Extremist activities: advocating widespread unlawful discrimination based on race, color, national origin, religion, sex (including pregnancy), gender identity, or sexual orientation.”

But the key is in the definitions:

Department of Defense Instruction (DoDI) 1325.06. The opposite of lions.

Biden’s definition of active participation includes, “fundraising for, or making personal contributions through donations of any kind (including but not limited to the solicitation, collection, or payment of fees or dues) to, a group or organization that engages in extremist activities.” Potentially donating to a traditionally biblical church or synagogue would mean violating the Biden administration’s new guidelines against active participation in extremism…

Garrison’s definition of extremism includes advocating for “discrimination” against “gender identity” which means that anyone opposed to teenage girls being forced to shower with men is now accused of being an extremist and that supporting virtually any conservative group effectively makes a member of the military into an “active participant” in “extremist activities”.

So the mere act of “liking” or sharing any content from certain people can label you an extremist? The only hope is to remove the military leaders who subscribe to such a leftist agenda. Both Republican and Democrat administrations have caused this. As Washington’s attack on the Hessians reminds us, even if we seem to be losing the battle, it only takes a handful of patriots to win. Is Stuart Scheller correct? Are the lions home from war?

The future of America may depend on it.