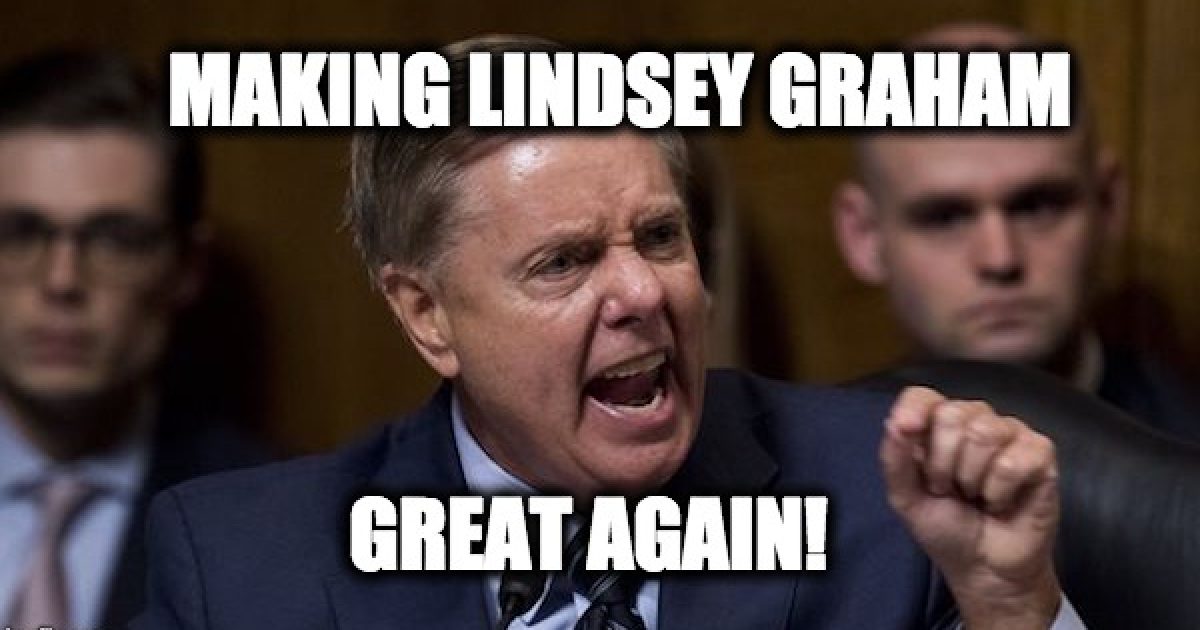 Lindsey Graham stunned conservatives last week when he angrily ripped into Democrats for their unbelievable attack of Brett Kavanaugh at the last minute of his confirmation process.

His impassioned speech, in which he called the accusations against Kavanaugh the “most unethical sham since I’ve been in politics” became a favorite moment during the hearings last week as internet conservatives declared they had no idea where this new Lindsey Graham came from but hoped he was here to stay.

Here it is if you missed it:

Graham, who has never been considered a staunch conservative, has clearly been the breakout “owner of libs” star from that moment, as he continues to demonstrate a complete and total lack of giving a hoot.

This week, when Sen. Bob Menendez called the FBI findings on Kavanaugh, which just so happened to not work in the Democrats’ favor, “bullsh*t”, Graham shot back on an appearance with Laura Ingraham on Fox:

“To my good friends, is this advise and consent?” he asked of the two Democrats. “Your view of the Senate’s role is to take a good man’s life and turn it upside down.”

“That’s not advise and consent, that’s despicable,” Graham said of Democrats’ actions during the confirmation process. “[This] might blow up in your face — I hope it does.”

“Let me tell it to my friend Bob, what y’all have done is bulls**t,” Graham added, borrowing Menendez’ choice of expletive.

And then was the “boo yourself” interview:

He also made social media history with a perfectly timed photo that perfectly captured the way this whole Kavanaugh accusation scandal has played out for the liberals:

I title this masterpiece:

“The Ownership Of The Lib” pic.twitter.com/0rZFOC5Vei

Clearly, this photo captures exactly how Graham feels right now to be on the winning side of this failed plot to destroy Kavanaugh, as indicated by a recent interaction he had with some of the protesters who have descended on Washington DC this week to throw public temper tantrums over Kavanaugh, as reported by The Daily Wire:

I WITNESSED BASED LINDSEY GRAHAM IRL

Graham was walking to his car. Protesters followed him screaming that they would remove him from office.

Then looks back at me & smiles.

And interviewed by Chris Wallace on Fox News Sunday, Lindsey Graham not only said he was going to campaign against some of his Democratic colleagues for the first time in his Senate career but he made an open challenge to Chuck Schumer:

Maybe its that he’s no longer under the influence of the late John McCain, either way, this should count as another Trump promise fulfilled, making Lindsey Graham great again.