Lindsey Graham Confirms: Obama Selling Out All Of Our Middle East Allies To Make Deal With Iran 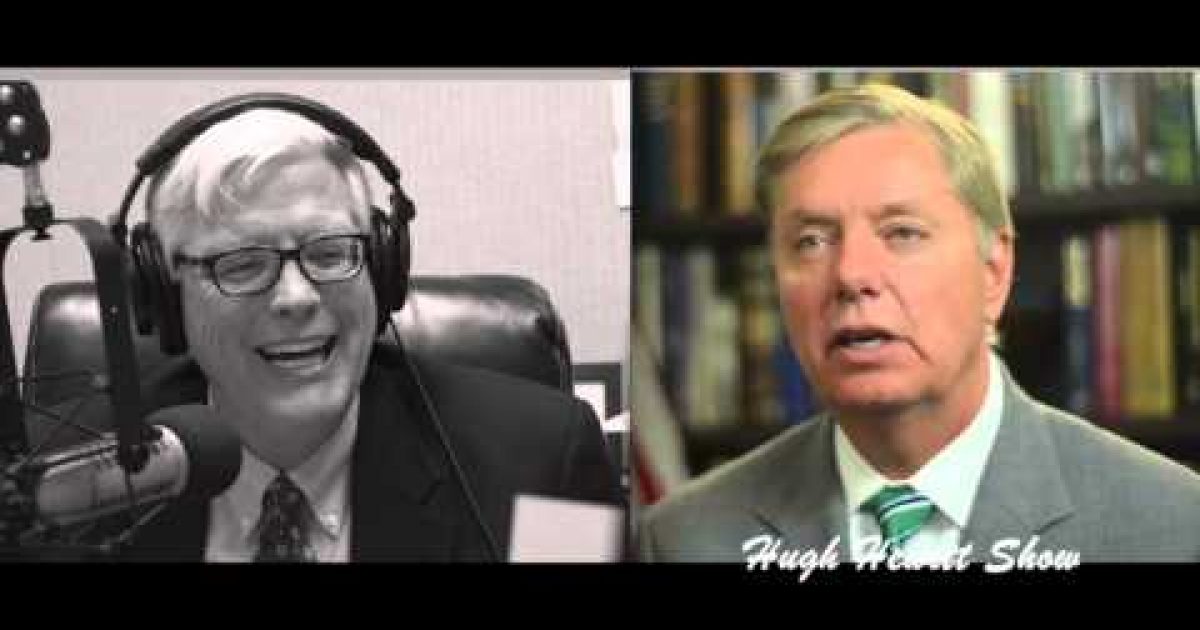 So Obama’s about to unleash hell on the Middle East. He’s about to
create a nuclear arms race by wanting a deal with the Iranians so badly
that he’s about to make the mistake of a lifetime.

Senator Lindsey Graham was on Wednesday’s Hugh Hewitt program and confirmed some of the reports circulating about Obama’s Iranian negotiations.  Specifically he was working on a deal that would not only sell out Israel but all of our Middle East allies, even to the extent of holding up arms shipments to Jordan as not to upset the Iranians. Also the administration has no intention of going to congress for approval of his deal.

Additionally we learn the reason our Arab allies won’t help us with ground troops in the fight against ISIS in Syria is because President Assad is still in power there, but Obama wont help to oust Assad because Assad is an Iranian puppet and we don’t want to upset the Iranians during the nuclear negotiations.

Hewitt: I’m going to talk to Michael Doran today and Lee Smith about one question – who is the greater threat to America – ISIS or Iran? What’s Lindsey Graham’s opinion?

Graham: Not even close – Iran with a nuclear capability is the greatest threat the world will know in my lifetime.

Hewitt: Well then, what is the Republican Congress doing to throw everything it can in the way of this President’s headlong rush to appeasement with Iran?


Graham: We’ve got a two-front strategy here. We’re trying to get Kirk-Menendez up for a vote that would tell the Iranians if you walk away from negotiations, we’re going to reimpose sanctions, if you cheat, we’ll reimpose sanctions. That’s one approach. The Corker-Graham approach, I think quite frankly, is even a better approach. It says there will be no binding deal with the Iranian nuclear program regarding lifting Congressional sanctions unless Congress votes to approve the deal. That’s what we’re doing. We’re going to have a vote this year, sooner rather than later, I hope, about Kirk-Menendez. But Corker-Graham, I think, is the best check and balance against a bad deal.

Hewitt: Well, I agree with that. Those are two different bills, two different sets. What’s our timetable, because I think if you read this Doran piece, it looks like the President is hell-bent on giving away the store quickly.

Graham: Well, he is, and here’s the, you know, everything, you know, you did Townhall.com, you said everybody should speak up about Iran and Syria.

Graham: And well, you’re right. I mean, if we want to be commander-in-chief, you need to understand the job. So here’s what I’m saying. I’m not ruling, I’m not saying that I would rule out an American ground component. I’m ruling it in. There is no way to liberate and hold and clear and build Syria, rid Syria of ISIL, which is a direct threat to our homeland, without a regional Arab force that doesn’t exist. And there’s no way that regional Arab force can win without an American component. We can only, we do things they can’t do. And there’s no way the Arabs are going in on the ground until we deal with the Assad threat, who is a puppet of Iran. So what I’m telling the American people and the members of my party that as much as I hate to tell you, there is no way to dislodge ISIL from Iraq and Syria without an American ground component. Not the 82nd Airborne, but thousands of American soldiers embedded with the Iraqis and some regional force in Syria to go dig these guys out, because if you go in and you lose, that’s the worst of all outcomes.

Hewitt:  I actually saw you do this with Jake Tapper less than an hour ago. I was watching The Lead for my show prep, and you were the first Republican I have seen who came out and said look, we have got to get serious about these people, they’re not going anywhere, and by the way, Iran has got a plan and it’s coming together for them.

Graham: See, this is what people don’t understand. Obama doesn’t want to challenge Assad, because that will upset the Iranians. Assad is a complete puppet of Iran. Iran controls, or heavily influences four Arab capitals without a nuclear weapon. They have great influence in Iraq with Shiia militias, the Houthis in Yemen have now taken down the government. They’re Iranian-backed. You’ve got Assad in Syria who’s a puppet of Iran, and you’ve got Hezbollah. So I went to the region, and I had the Saudis, the Qataris, everybody in the region tell me, the Jordanians, we will go in and fight ISIL, because it’s a threat to our religion and to our national security. But you have to go with us, and we have to take Assad down, because we’re not going to fight ISIL and leave a puppet of Iran in place. And Obama’s fixation on a deal with Iran is allowing ISIL to get stronger, and it’s the fatal flaw in our strategy to degrade and destroy ISIL. And here’s the magic thing for me. ISIL wants to hit us as much as they want to hit the region.

Hewitt: Now Senator Graham, that’s very clear. It’s very straightforward. I am wondering where were the Republicans over the last 48 hours not saying, 24 hours, after the burning alive of a Jordanian fighter pilot, and we’ve got fighter pilots in the same situation, right? They’re in harm’s way. They’re doing the same thing.

Graham: Well, 92% of the flights, they tell me now, I thought it was 80%, 90% of the sortees flown in Syria have been flown by the Americans. Why won’t the Arabs get in the fight? Here’s why the Arabs won’t get in the fight. They’re not going to follow a strategy that’s doomed to fail. Training the Free Syrian Army is a good idea. But if you train these guys up, and you say you can only fight ISIL, then Assad is going to barrel bomb these guys when they get any strength at all. So the Arabs are telling the Americans we will go with you, the Qatari emir said I’ll pay for the entire cost of the Syrian operation. The Saudi Crown Prince told us you can have our army, but you’ve got to have a plan that rids Syria of Assad, because we’re not going to go in and leave him in power, a puppet of Iran. That’s the problem. He doesn’t want to take on Assad, Obama, because he’s so worried about upsetting the Iranians when they’re wreaking havoc in the region.

Hewitt: When the Israelis took out the Iranian Revolutionary Guard general and ten others in the Golan Heights…

Hewitt: …what did you see the significance of that action? It wasn’t accidental. What message was being sent?

Graham: Well, the message was that the Hezbollah is basically trying to, the message was that we’re not going to allow a force in Syria to be used to attack Israel. Hezbollah is going to be unleashed by Iran here soon on Israel. The closer we get to the negotiations, I think the more havoc they’re going to wreak into the region. Obama wants a deal so badly on the nuclear ambitions of the Iranians that he is being completely irrational. At the end of the day, the Arabs and the Israelis have become one when it comes to Iran.

Hewitt: Should any GOP candidate be taken seriously who is not speaking clearly on these issues, immediately after, they’re all afraid of getting Mitt Romney’d after Benghazi, right? They don’t want to speak too quickly.

Graham: Well, you know, I don’t care what party you’re running on. I’m a proud Republican. I love the Republicans. Nobody should be taken seriously who wants to be commander-in-chief if you can’t articulate a strategy to defeat people who burn folks alive, who crucify children, who behead people. If you can’t articulate that that is a threat to our way of life, and you don’t understand…I heard a guy on Fox about an hour ago say well, this is not our fight, this is their fight. The guy is completely oblivious to the goal of ISIL. ISIL wants to purify their own religion, the Islamic religion, but destroy Israel and come after us. There are 4,000 foreign fighters at least integrated in ISIL that have Western passports. The head of ISIL served four years in Camp Bucca where I did my reserve duty in Iraq in an American military prison camp. And when we turned him over to the Iraqis, he’s an Iraqi, he said I will see you in New York. The bottom line is ISIL, al Nusra, al Qaeda in the Arabian Peninsula, all have one thing in common. They want to attack America. And we’re letting them get stronger by the day, because we have no strategy to defeat them.

Hewitt: Two more questions. In Iran and in Argentina, a prosecutor was assassinated who was going to serve an arrest warrant on Argentine’s president for blocking an investigation into Iranian complicity in the attack there in 1994.

Hewitt: Do you think, do you see the hand of Iran there?

Graham: Iran is, again, influencing four major capitals. They’re spreading their influence all over the world, including South America. Why would you negotiate with a regime that is building an ICBM, that is sponsoring terrorism at the highest level in modern times? Why not just call a time out and say we’re not going to talk to you anymore about your nuclear program until you stop your weapons buildup and destabilizing the neighbors? Does anybody really believe that Barack Obama would use military force against Iran after he drew a red line against Assad and did nothing? The Israelis are in a box. The Israelis are not going to allow the ayatollahs to go nuclear. And the deal that we’re contemplating with Iran is North Korea in the making. And the Arabs and the Israelis are not going to allow the ayatollahs in Iran to have a nuclear capability only contained by the UN. That’s what we tried to do in North Korea. So Obama’s about to unleash hell on the Middle East. He’s about to create a nuclear arms race by wanting a deal with the Iranians so badly that he’s about to make the mistake of a lifetime.