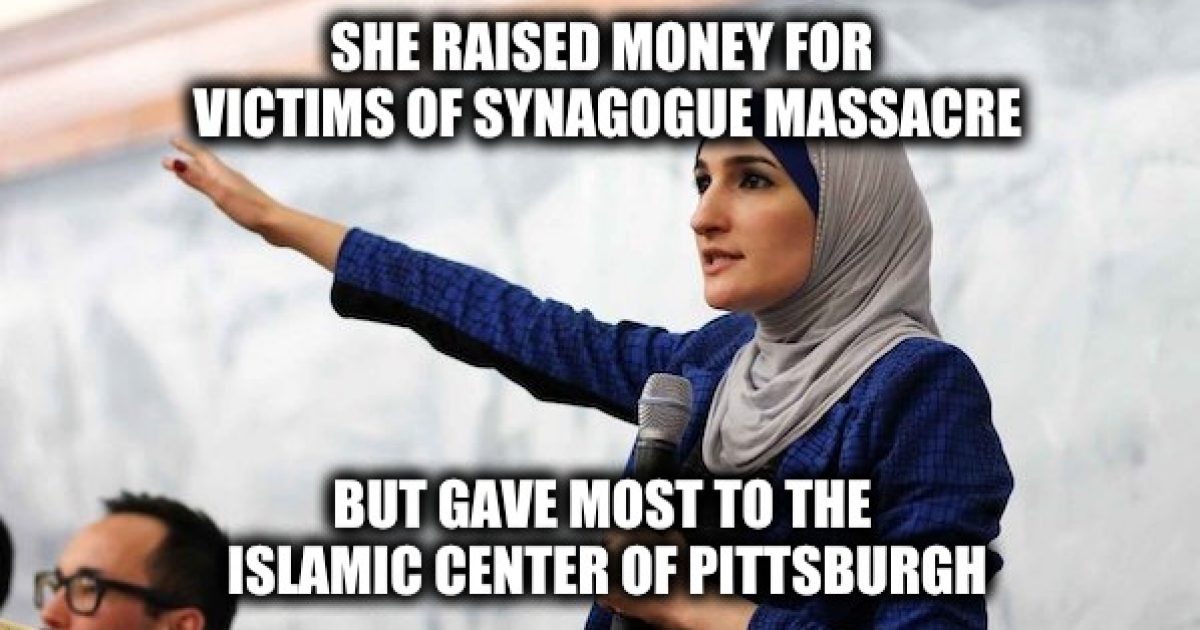 Linda Sarsour is an anti-Semite supported by Democrats such as New York’s Governor Cuomo and New York’s Senator Gillibrand. Liberal Jews refuse to recognize her hatred saying that she raised money for the Pittsburgh synagogue that endured a massacre last month. And it’s true she said she was raising money for the Synagogue, but she was lying. The Synagogue received only about 10% of the money. Linda Sarsour gave most of the money donated to help Tree of Life Synagogue massacre victims to the Islamic Center of Pittsburgh–at least until she got caught.

During Shabbat services on Oct. 27th, an anti-Semite barged into a Jewish Synagogue in Pittsburgh and opened fire killing 11 people. Another anti-Semite, Linda Sarsour came on the scene to raise funds for vandalized Jewish cemeteries to raise money for the massacre victims. While many of the reports claim it was a GoFundMe fundraiser that is not true. The money was raised via a different service LaunchGood.com.

She collected $400,000 for Jewish causes, $240,000 was raised after the shooting and gave only $10,000 to the synagogue. She claimed $160,000 would be part of an effort to fix vandalized Jewish cemeteries, but no Jewish cemetery says it received any of that money.

Now, some money was given to Tree of Life, around $10,000, but that was part of an effort to repair Jewish cemetaries that were vandalized. Since the shooting, around $240,000 were raised, but it appears little, if any, has been sent to Tree of Life. Of that $240,000-figure, $155,000 went to the the Islamic Center of Pittsburgh.

Hen Mazzig of The Jerusalem Post initially said that $400,000 was raised for Tree of Life, but then offered a correction, noting that $160,000 was raised by Sarsour as part of an effort to fix Jewish cemeteries and $240,000 was raised after the shooting. The corrected tweet is in the thread above.

Tree of Life received just $10,000 from the cemetery campaign but doesn’t appear to have received a dime from the post-shooting fundraising effort, but now the Islamic Center of Pittsburgh says they will supposedly send its six-figure check ($155,000) to Tree of Life. According to Conservative Review’s Jordan Schactel, the other $83,634 will go “to vague ‘projects that help foster Muslim-Jewish collaboration, dialogue, and solidarity. Oh, and as for the money raised for Jewish cemeteries, several never received the funds that were promised

Hen Mazzig posted a series of Tweets after learning of the situation:

The propaganda arm (The Forward) tried to twist it, in another deceiving article by the ever so smart journalist, Pink, but the truth is clear.

“The Forward” started out as a daily newspaper for Socialists.

From The Forward, which seemingly does its best to whitewash what happened here. pic.twitter.com/t2UQJIFznW

Flashback: El-Messidi and Sarsour were also behind the 6-figure sum that was raised to “repair Jewish cemeteries.” The money was never accounted for. Cemeteries said they never received a check. https://t.co/LPGMoEm3Tk

According to the Clarion project, the Islamic Center of Pittsburg has terrorist ties:

The Islamic Center of Pittsburgh says its “mission is to shape the American-Muslim identity by educating, empowering, and uniting our dynamic and diverse community.”

The ICP’s bylaws state that it is officially affiliated with the Islamic Society of North America (ISNA), labeled as a Muslim Brotherhood front by the FBI. Its real estate is also entrusted to ISNA. The mosque is prohibited from violating ISNA’s standards and the President of ISNA has the right to dissolve ICP’s Board of Directors

The former imam and religious director of ICP, Sheikh Atef Mahgoub, is from Egypt and lectures on behalf of theCouncil on American-Islamic Relations,  another U.S. Muslim Brotherhood front.

Note: as soon as the reports of the misappropriation began to leak out,  the Islamic Center of Pittsburgh began to transfer the money to the Jewish Federation of Pittsburgh. At least the money is being used for the original purpose. It’s a shame that Sarsour’s group had to be shamed into it.

Anytime someone tells you that Linda Sarsour is not a hater but a good person, throw this story at them. Sarsour is an anti-Semite and a fraud who raised money for the Pittsburg shooting victims but used it for other purposes.