Anti-Trump Lincoln Project Blasted for Funneling Donations to Its Founders 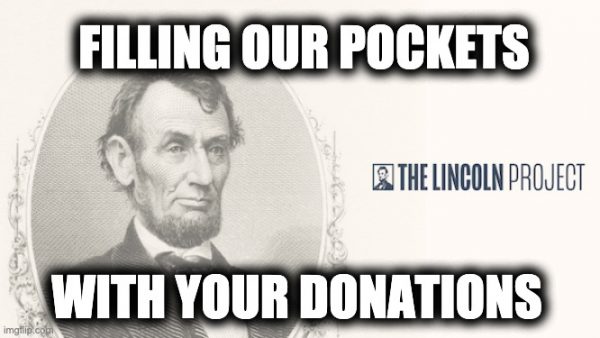 It doesn’t get much swampier than this, folks. lincoln project donations

The Lincoln Project, a political group comprised of Republicans who oppose the reelection of President Donald Trump, now stands accused of using their organization to funnel money from their donors to a number of groups owned by their founders.

The group, which was formed last December, has made national headlines for its viral ads, many of which attack Trump and his congressional allies. Since its launch, the Lincoln Projected has raised more than $19 million, with most of the money ($16.8 million) coming in over the last three months. A significant portion of the group’s newfound contributions, as noted by the Center for Responsive Politics, come from Democrat mega-donors, some of whom have donated as much as one million dollars.

Here’s where things get murky and mucky.

Although much emphasis has been placed on the Lincoln Project’s fundraising numbers, especially the fact that 45 percent of its total contributions come from individuals giving $200-or-less, little attention has been paid to how the group is spending its money. Federal Election Commission (FEC) filings made public on Wednesday grant an inside view of how the Never Trump organization has operated in its first six months of existence.

The filings indicate that the Lincoln Project’s biggest vendors, Summit Strategic Communications, LLC, and Tusk Digital, Inc., are owned by two of its board members. >Summit, which was incorporated in Park City, Utah in March 2018, is owned and operated by Reed Galen, one of the Lincon Project’s co-founders. Galen, a well-connected Republican Strategist, worked on both former President George W. Bush’s 2004 reelection effort and the late-Senator John McCain’s 2008 presidential campaign. Prior to Galen linking up with the Lincoln Project, Summit appears to have had only one political client at the federal level.

Tusk, on the other hand, is a strategic consulting and marketing firm owned by Ron Steslow, another founder of the Lincoln Project. The firm, which was incorporated in Nevada in February 2014, has counted among its clients the Republican Party of Colorado and several former senators, including Dean Heller and Orrin Hatch. Its most notable client, however, was former Hewlett Packard CEO Carly Fiorina, who employed Tusk throughout her unsuccessful bid for the 2016 Republican presidential nomination.

The Lincoln Project has yet to publicly acknowledge this possible conflict of interest as of this writing. At the very least they should change their name. After all Abraham Lincoln had the nickname, Honest Abe. The way this anti-Trump group seems to be funneling money to its board—“honest” doesn’t seem to be a correct adjective.

After all, The Lincoln Project says it’s a Republican group, but much of its funding comes from Democrats and is spent on its two biggest vendors that are owned by Lincoln Project board members. As Billy Shakespeare, the Bird of Avon once said, “Something’s rotten in the District of Columbia.”