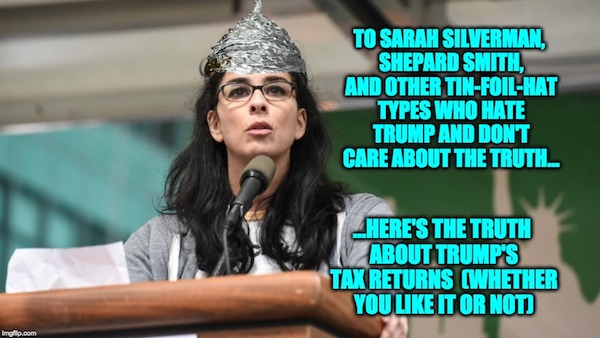 Tax Day, April 15th saw a series of progressive protests which were thinly veiled as “tax day” marches. The question of President Trump’s tax returns has been ratcheted up by disappointed Democrats and lazy media types (but I repeat myself) as it is one of the last gasps of the ailing, left-leaning movement being used to de-legitimize the election of Donald Trump as the President of the United States.

A rally in New York saw, childish celebrities lending their own unique brand of nonsense to the affair, many within the crowd denounced Donald Trump’s unwillingness to release his tax returns to the public. Perhaps the craziest was Sarah Silverman whose rant indicated that a switch to decaf for her morning coffee was in order. She screamed:

“’Show us your f*cking taxes, you emotional child,’ the 46-year-old comedian and liberal addressed the president in comments delivered to the protesters.

“’You like being a superficial bully? Here’s one for you: you are a three at best,’ Silverman added, apparently referring to Trump’s appearance.

While that simple premise of tax returns has already been addressed ad infinitum by the White House and Trump himself, that doesn’t stop liberal protesters from ramping up their rhetoric into violence at many of these scattered events.

When word got back to President Trump regarding what was happening, the Commander-in-Chief had a very clear and stern message for these troublemakers:  It’s too late, I’m already President.

“It has been over three months now and Democrats and early Sunday morning, President Trump spoke to their anti-rallies in clear language, ‘the election is over.’

“No doubt, even the smartest liberal wouldn’t understand that. Democrats have been acting very maliciously against Pres. Trump over the last 2 1/2 months he has been in office.” 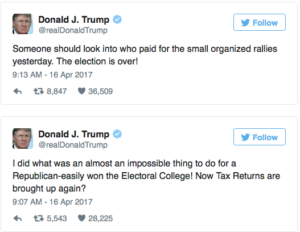 Furthermore, Trump’s insistence that someone should be looking into who paid for these rallies says something about this President’s ability to see past the smoke and mirrors of the left.  There have been a multitude of reports that these leftist agitators are being paid by wealthy, left-leaning globalists to tarnish the reputation of the President.  By inciting violence as they often do, these rebellious liberal zombies will create a scene worthy of the evening news, with Donald Trump’s name smeared across the bottom banner as scenes of chaos and violence play out in the foreground.

This sort of association of the President with chaos and anarchy is a purposeful ruse by the mainstream media.  By constantly appearing together on television, Trump and Violence will become synonymous with each other, and that will ultimately shape the nation’s psyche.  Liberals on the verge of being radicalized will reach that plateau sooner than they would without the added dissonance of the media’s charade.  Then, with these violent melees truly becoming mainstream in appearance, the left won’t think twice about picking up that brick, assaulting that police officer, or worse.

Beyond the attempt to associate Trump with violence, the protesters and other celebrities still in mourning about the election loss of Hilary Clinton, have been joined by the Trump bashers in decrying that the president hasn’t as of yet released his returns,  albeit more they do it more subtly.

For example,  Fox News’ Shepard Smith who never hides his disgust over the fact that Trump is president, practically gushed on air when reporting he checked with the IRS who informed that taxpayers are allowed to release his returns while they are under audit, which is 100% correct. Since he received the answer he desired, neither Smith nor anchors at other networks, consulted with CPAs and/or tax attorneys to find out whether or not releasing his tax returns are advisable (it’s not). Nor have any of those anchors addressed the fact that the financial disclosures required by law (tax returns aren’t required) and issued by the president, tell a great deal more about a candidate’s financial dealings than a tax return.

During the primaries when Trump first announced that he wouldn’t release his tax returns till the audits against him were over, I consulted with a few CPAs. What I was told was while there is no rule against him releasing tax returns while under audit any CPA or Tax Attorney who allows their client to release tax returns while under audit should lose their license to practice (any year not just the ones the IRS is looking at).

When someone as wealthy as President Trump is audited there is likely a team of people at the IRS going through his returns for the audited years— looking through the returns for something to nail him with. But when a candidate releases tax returns the IRS gets help. The  team of people looking for the tiniest mistake goes from the team at the IRS auditing, to the DNC, newspapers, magazines, tv networks, bloggers, etc. And not just for the audited years but for every year released. If the media finds something in a year that the IRS isn’t auditing the IRS can add that year’s return.

While the media digging through someone’s returns doesn’t really matter when there is no audit in place, why should anyone take a chance on giving the auditors more red meat?  And if the media finds something, they may be criticizing a totally legitimate item.

Also understand that the fact someone’s return is being audited doesn’t mean they IRS has found something. There are certain red flags that make audits more likely. For example if someone claims to have a home office, they are more likely to be audited, not because their claim is illegitimate but because many people do file false claims of a home office.

It may also be the case that since IRS was politicized under Barack Obama (Tea Party scandal), it would not be surprised to learn that Trump was selected for audit because of his history of publicly criticizing the former president. And face it, as long as President Trump is being audited  IRS director John Koskinen has job security. Many people have asked why Pres. Trump hasn’t fired IRS director John Koskinen, who has blocked the investigation into the IRS/Tea Party scandal while showing a disdain for Congress and the American people. A possible reason is that the President does not want to appear to influence his audit.

In the end, while the Democrats, Trump-hating reporters, and other mourners of Clinton’s loss have exploited the non-release of President Trump’s tax returns to their advantage, wondering what Trump is hiding, announcing conspiracy theories of what he did or didn’t do. If they asked the question (or wanted the real answer) they would know the real probable reason Trump wasn’t releasing his returns.  The truth is if any one of them were a politician being audited, their attorney would give the same advice–don’t release your tax returns (and if they don’t get that advice they should fire the attorney asap).

This is all part of the tin-foil hat conspiracies used by the liberals in an attempt to overturn the vote of the people. Perhaps their next step may be to combine their conspiracies to make them more forceful— something like “Donald Trump used a CPA of Russian decent to do his tax returns and that’s why he won’t release them.