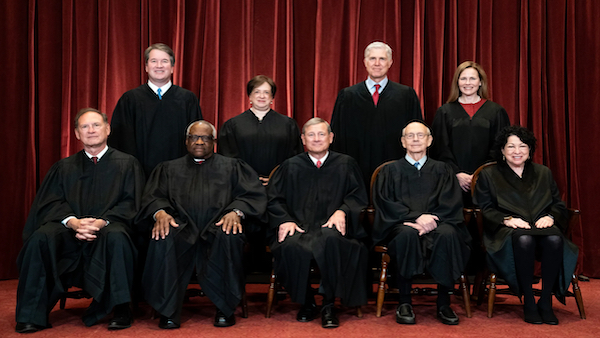 Adding salt to the wound, it was Liberal Justice Elena Kagan that delivered the Court’s opinion.

The Immigration and Nationality Act requires that anyone who seeks LPR status — also known as a Green Card — have to be “inspected and admitted” at a port of entry into the United States. Sanchez entered the country illegally in 1997.

In 2001, the Government granted Temporary Protected Status (TPS) to El Salvador following several devastating earthquakes, and it has been extended ever since. This allows foreign nationals from areas with dangerous conditions to live and work in the United States temporarily. Sanchez was granted TPS status even though he had entered the country illegally years earlier.

In 2014, Sanchez applied for LPR status, but the U.S. Citizenship and Immigration Services determined Sanchez ineligible because he had entered the country illegally.

Sanchez fought the decision, and the District Court reasoned that the granting of TPS status required that he be treated as if he had entered illegally. The Third Circuit reversed the decision stating that Sanchez’s unlawful entry precluded him from applying for LPR status under §1255, despite his TPS status. libs big SCOTUS loss

Justice Kagan said there is “no dispute” that Sanchez entered the US “unlawfully, without inspection.” She then argued for a straightforward application of immigration law, writing in agreement with the government’s decision to deny Sanchez permanent status as a lawful resident because he was not admitted into the country lawfully.

Kagan summed up the situation this way, “a grant of TPS does not come with a ticket of admission. It does not eliminate the disqualifying effect of an unlawful entry.”

In plain English: A married couple entered the U.S. from El Salvador. They're protected from deportation under a program in which the U.S. doesn't send people back to nations in crisis. The couple applied to become lawful permanent U.S. residents. SCOTUS said they don't qualify.

It should be noted that Sanchez’s wife is also a petitioner in the case claiming LPR status derivatively under a provision that entitles her to the same status as her husband.

Petitioner Jose Santos Sanchez entered this country unlawfully from El Salvador. Years later, because of unsafe living conditions in that country, the Government granted him Temporary Protected Status (TPS), entitling him to stay and work in the United States for as long as those conditions persist. Sanchez now wishes to become a lawful permanent resident (LPR) of the United States. The question here is whether the conferral of TPS enables him to obtain LPR status despite his unlawful entry. We hold that it does not…

…Jose Santos Sanchez is a citizen of El Salvador who has lived in the United States for more than two decades. He entered this country unlawfully in 1997—without “inspection and authorization by an immigration officer.” §1101(a)(13)(A). Once here, he worked without legal authorization. In 2001, the Government designated El Salvador under the TPS program after a series of devastating earthquakes. Sanchez obtained TPS that year, and has held it ever since. In 2014, he applied under §1255 for an adjustment to LPR status.2 The United States Citizenship and Immigration Services denied Sanchez’s LPR application. Under §1255, the agency stated, Sanchez was ineligible for LPR status because he had not been lawfully admitted to the United States. See App. to Pet. for Cert. 40a. And in the agency’s view, his TPS provided no way around that bar. “Recipients of TPS,” the agency reasoned, “must still meet the threshold requirement” of a lawful entry. Id., at 46a. Or said otherwise: “A grant of TPS does not cure a foreign national’s entry without inspection or constitute an inspection and admission of the foreign national,” as demanded by §1255.

Sanchez challenged the decision. The District Court granted summary judgment in his favor, relying on the statutory mandate that a TPS recipient “shall be considered as” having “lawful status as a nonimmigrant” for purposes of applying to become an LPR. See Santos Sanchez v. Johnson, 2018 WL 6427894, *4 (D NJ, Dec. 7, 2018) (citing §1254a(f )(4); emphasis deleted). According to the court, that provision requires treating TPS recipients “as though [they] had been ‘inspected and admitted.’” But the Court of Appeals for the Third Circuit reversed, holding that “a grant of TPS does not constitute an ‘admission’ into the United States.” Sanchez v. Secretary U. S. Dept. of Homeland Security, 967 F. 3d 242, 252 (2020). The court observed that “admission” and “status” are separate concepts in immigration law. Id., at 246. So, the court concluded, providing a person with nonimmigrant status (as the TPS provision does) does not mean admitting him (as §1255 requires).

We granted certiorari, 592 U. S. ___ (2021), to resolve a Circuit split over whether a TPS recipient who entered the country unlawfully can still become an LPR.3 We now affirm the Third Circuit’s decision that he cannot. The TPS program gives foreign nationals nonimmigrant status, but it does not admit them. So the conferral of TPS does not make an unlawful entrant (like Sanchez) eligible under §1255 for adjustment to LPR status.

…Section 1255 generally requires a lawful admission before a person can obtain LPR status. Sanchez was not lawfully admitted, and his TPS does not alter that fact. He therefore cannot become a permanent resident of this country. We affirm the judgment below.
Source: Supreme Court (Emphasis Added)

Surprisingly, the Biden-Harris administration opposed Sanchez and Gonzalez in their claim, and frankly, that’s a good thing. Kudos where it’s due.

But note, Sanchez, and Gonzales are still able to stay despite the dubious TPS claim.

Now, if only they could actually stop more illegal entry at the southern border. That’d be great.