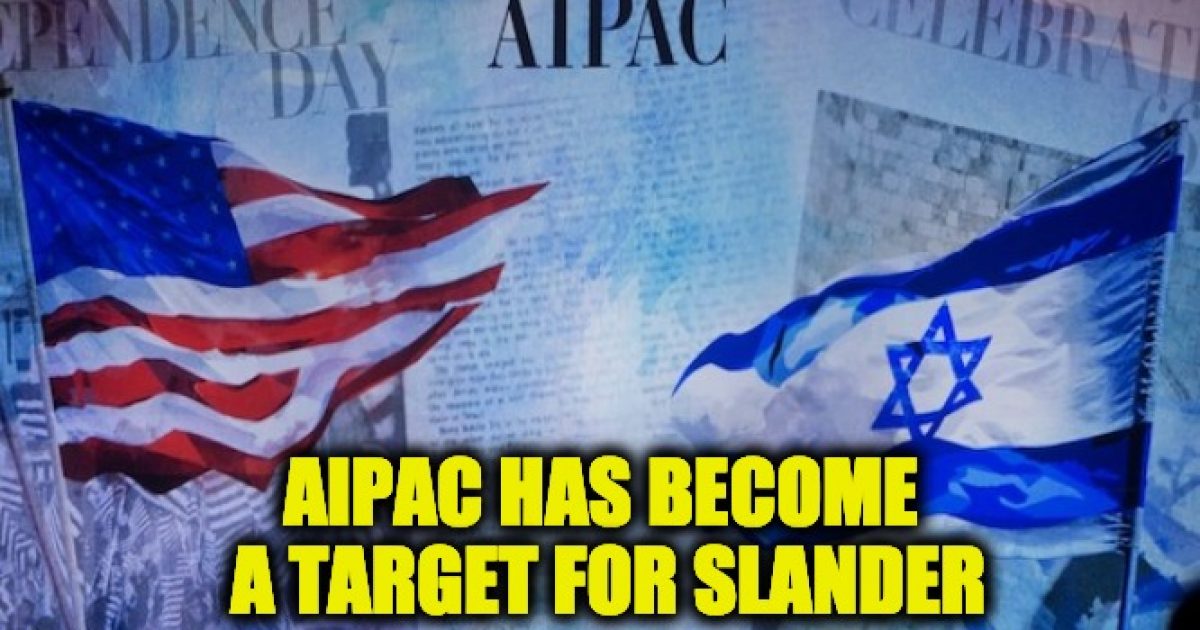 Usually, the anti-AIPAC slander is that the organization is a huge, behemoth lobbying group. That’s not true. They don’t donate money directly to candidates and when it comes to lobbying they are relatively tiny.  Based on the 2017 Open Secrets data, AIPAC lobbying spending is tiny, it doesn’t even make the top 100 lobbying organizations in America. In 2017 AIPAC spent only $3,402,651 on lobbying. Putting that in perspective the 100th biggest lobbyist, Alliance of Automobile Manufacturers spent $8,100,000– almost two and a half times that of AIPAC.

AIPAC strongly supports a two-state solution and works tirelessly to bring peace to the region. A two-state solution – a Jewish state of Israel living in peace with a demilitarized Palestinian state – with an end to all claims is the clear path to resolving this generations-old conflict.

It will not feature, however, any of the Democrats who are running for President. The liberal and the media line is that the lack of Democratic presidential contenders is due to the left-wing advocacy group MoveOn’s massive pressure on the presidential wannabees not to attend this year’s conference. Here’s a secret the media won’t tell you—most of them weren’t invited.  AIPAC will not release a list of who declined invitations (they never do) but judging by the history of the AIPAC conference presidential candidates don’t show up until the election year. For example in 2016 AIPAC Speakers included Hillary Clinton, Donald Trump, John Kasich, and Ted Cruz, but none of those candidates from either side spoke in 2015.

By the way, in 2016 Bernie Sanders announced he would not be attending. Per CNN Sanders said he was scheduled to be traveling throughout the West and his campaign schedule prevents him from participating. He said he would send remarks to the organization in the hopes that they could be distributed to members as AIPAC does not permit candidates to address the conference remotely.

Another recent liberal charge is that Democrats shouldn’t go to the AIPAC conference because the organization is trying to make supporting Israel a partisan Republican issue.  As I learned from personal experience, nothing can be further from the truth AIPAC is a non-partisan organization that seeks to foster the relationship between the U.S. and Israel with both political parties. In my experience, AIPAC pushes bi-partisanship of support for Israel to a fault.

The AIPAC changes to the 2012 platform included the removal of support for an “undivided” Jerusalem as Israel’s capital, as well as the removal of language calling for the relocation of the U.S. embassy in Israel to Jerusalem. The 2008 Republican platform stated: “We support Jerusalem as the undivided capital of Israel and moving the American embassy to that undivided capital of Israel.” That language was not included in the 2012 version, which states: “[W]e envision two democratic states—Israel with Jerusalem as its capital and Palestine—living in peace and security.” The new languages left out the undivided part added sharing it with Palestine and also removed moving the U.S. embassy to Jerusalem.

Four years later the platform subcommittee created even stronger pro-Israel language, which was adopted despite a full-court press by AIPAC to tone it down. Before the 2016 convention, I spoke to South Carolina state representative and GOP delegate Alan Clemmons (who introduced the language to the platform committee) and a second delegate who wished to remain anonymous, both of whom said that AIPAC was fighting against the new platform language.

The new platform added back the pre-2012 Jerusalem language “We recognize Jerusalem as the eternal and indivisible capital of the Jewish state, and call for the American embassy to be moved there in fulfillment of U.S. law.” It also rejected the Obama anti-Israel policy:

Clemmons’ wording also recognized that the BDS movement is anti-Semitic in nature and seeks to destroy Israel” and calls for federal legislation “to thwart actions that are intended to limit commercial relations with Israel, or persons or entities doing business in Israel or in Israeli-controlled territories, in a discriminatory manner.”

His wording passed the committee; however later in that same day Mr. Clemmons wrote on his Facebook page:

But Unfortunately, the saga is not over. The rumor is that AIPAC is trying to recruit surrogates on the Committee to oppose and weaken our strong Israel Plank language tomorrow when it comes before the full committee for approval. If you know any Platform Delegates please send them a note to STAND STRONG FOR ISRAEL!!!

While AIPAC was pushing the GOP not to look so pro-Israel, the Democratic Party was weakening its platform without any interference. Led by the anti-Israel President Barack Obama, the 2012 Democratic platform removed four basic pro-Israel planks from its platform, but during the Democratic party convention, one was put back (Jerusalem is Israel’s capital), over the objection of the delegates. The 2016 platform continued the Democratic Party’s giant step backward regarding Israel, an indication that Hillary Clinton will continue Barack Obama’s anti-Israel policies and weakness on terrorism.

You might be wondering how AIPAC could take action against a robust GOP platform seemingly against the best interests of Israel. That’s because the 2012 and 2016 Republican platforms go against the best interests of AIPAC which is to make sure one party is not more pro-Israel than the other which will lead to Israel becoming a partisan issue. It is crucial to AIPAC that support for Israel remain bi-partisan. That is why they’ve tried to dumb-down the past two GOP platforms.

Like most pro-Israel or pro-Jewish organizations in AIPAC leans towards progressivism. Progressives including AIPAC try to ensure that all results are equal even if it means diluting the good for a mediocre middle. That’s why the liberals and their friends in the MSM who are saying AIPAC is trying to make Israel a partisan Issue are lying and may be hurting their progressive efforts.

Trying to force both parties into Middle-East mediocrity hasn’t led to an improvement of the Democrats’ anti-Israel stance, actually, things have gotten much worse.  The only way to push the Democrats to be pro-Israel is to make them fight for Jewish and other pro-Israel voters. And the only way to do that is to reward the party that is so pro-Israel they beat back AIPAC’s attempt for mediocrity. In other words, vote Republican.