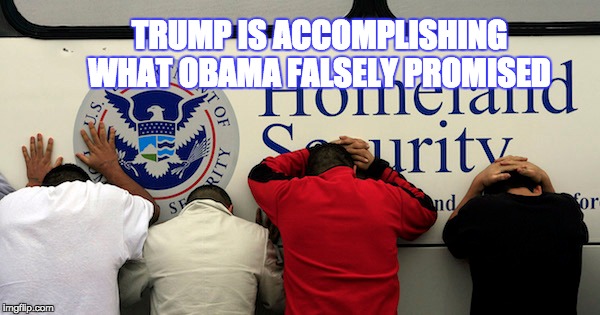 Here we go again. Once again President Trump is doing what he promised and once again the liberals are having a cow. Although this time President Trump is not only keeping his promise but keeping Obama’s broken promise of deporting criminal illegal aliens.

As reported in the Wall Street Journal:

The Immigration and Customs Enforcement agency said the five-day enforcement “surge” began Monday and concluded midday Friday. Officials confirmed action in Atlanta, Chicago, Los Angeles and New York, though they didn’t dispute that the operation was also under way in other cities.

“This operation is on par with similar operations we have done in the past,” said David Marin, field office director for ICE in Los Angeles, in reference to southern California.

He declined to say whether ICE offices around the country had coordinated a multicity enforcement action. He also declined to discuss President Trump’s executive order.

The agency said 160 foreigners were arrested in six Los Angeles-area counties this week, and said about 150 of them had criminal histories. Of the 10 others, five had been given final orders of removal or had previously been deported, ICE said.

ICE highlighted cases of several people suspected or convicted of serious crimes, including a Salvadoran national arrested in Huntington Park, Calif., who is wanted in El Salvador for aggravated extortion, a Brazilian arrested in Los Angeles who is wanted in Brazil for cocaine trafficking, and an Australian national taken into custody in West Hollywood who was previously convicted of “lewd and lascivious acts with a child.”

The liberals are freaking out. According to the UK Independent “Panic” and “terror” is said to be running through [illegal] immigrant communities in the US following raids carried out across at least six states as part of Donald Trump’s pledge to crack down on illegal immigrants.“This is clearly the first wave of attacks under the Trump administration, and we know this isn’t going to be the only one,” said Cristina Jimenez, executive director of United We Dream, an immigrant youth organisation.

This weekend a mass protest against Trump’s new deportation policy sprung up in New York City. For a change the New York Police Department didn’t treat these un-American disruptors with kid gloves and the ones blocking the road ways were slammed to the ground and arrested.

What nobody is reporting is that President Trump is following through with a policy enacted by President Obama…well at least promised by Obama.  Remember he stopped all deportations except for criminals.

As reported by the Center For Immigration Studies (CIS), DHS figures show there are about 2 million criminal Aliens. Despite this large bloc of criminals,  deportation of criminal aliens fell every year of the Obama presidency since 2009 (blue bar in chart below). Most recently from 63,127 in 2015 to 60,318 in 2016, out of an estimated population of two million criminal aliens. 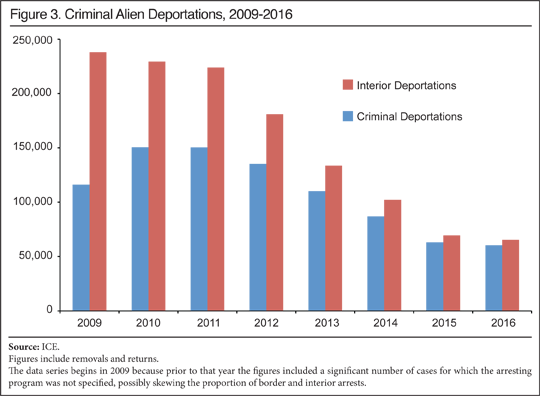 The reason for the decline is that the Obama administration kept whittling down the kind of criminal cases ICE officers were permitted to pursue. By the time he left office only aliens convicted of felonies, significant misdemeanors, or three lesser misdemeanors are considered priorities, and exceptions are allowed in many cases, such as if the alien has acquired a family or other community ties here.

On the other hand keeping his promise (and Obama’s original promise) President Trump has expanded the type of crimes that ICE can pursue, and has included being caught in the country after already being deported once.

Another CIS report suggests  that up to 75% of illegal aliens have committed some sort of crime. And it’s more than the publicized murders, sexual assaults, robberies etc. The 75% includes multiple deportations and/or faking social security cards to appear “legal,” get jobs, and/or obtain benefits reserved for citizens and legal residents.

President Trump’s action does what he promised, puts Americans first, and allows federal agencies to hold illegal aliens accountable for their crimes rather than rewarding them with permanently residing in America.  It also forces those who look for blanket amnesty to wrestle with the fact that a large chunk committed and continue to commit serious crimes.

Sorry Dems, as Barak Obama once said,  “Elections have consequences, we won!”

*NEW* BREAKING ALERT: If You Get THIS Phone Call From CPB-HANG UP AS QUICKLY AS POSSIBLE- It’s A SCAM- Here’s What It Does
America's Freedom Fighters