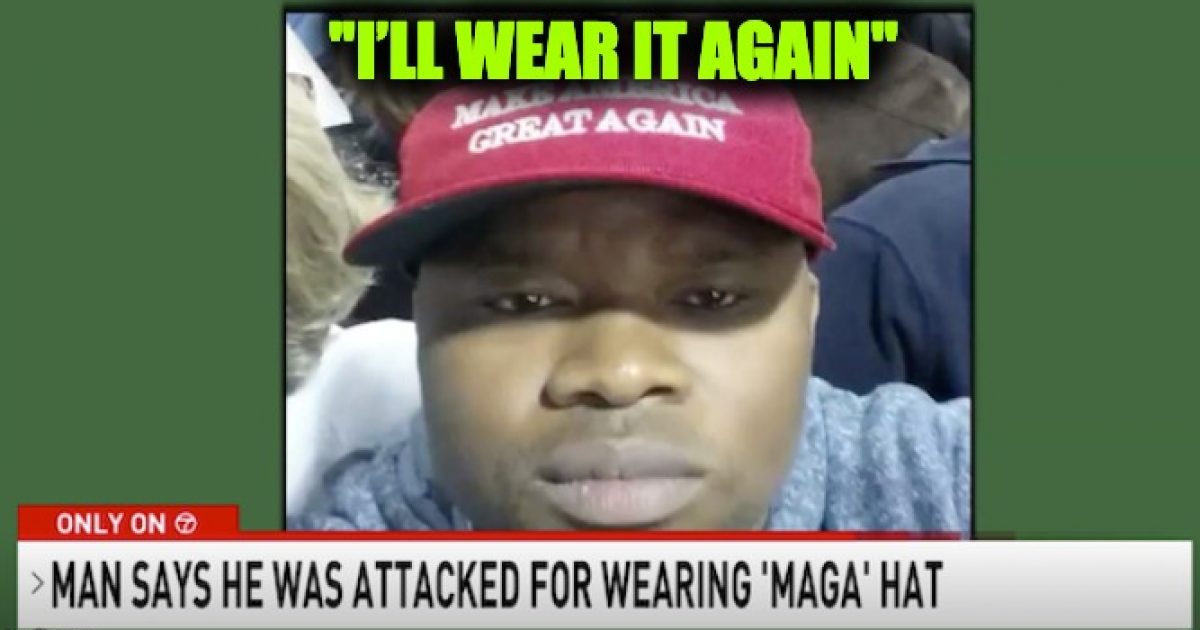 Atsu Mable, who was attacked for wearing the MAGA hat is a legal immigrant from Togo, and he supports President Donald Trump. But the two black Democrats who attacked him apparently could not stand the idea of another black man showing his support of the president.

NEW: This Germantown, Md. man tells @ABC7News he was attacked Saturday in his neighborhood by two men all because he was wearing a 'Make America Great Again' hat.

The men punched the Trump supporter (a legal immigrant from Togo) in the head + upper body and tried to steal his?. pic.twitter.com/BjRXbLjfXJ

The Montgomery County Police Department said in a Monday press release that the beaten man, “who was wearing a red, Make America Great Again hat, was approached by two men who began harassing the victim and asking why he was wearing the MAGA hat.”

Fearing serious injury, Mable — a married accountant with no children — fought back. Meanwhile, an eyewitness called 911 to report the two-on-one assault.

“I was falling back onto the ground,” Mable said. “They were punching me on my head. Suddenly I thank God for that bystander that came by and called the police.”

MORE: MoCo ? have arrested 27yo Jovan Crawford of Gaithersburg, Md. and 25yo Scott Roberson of NW DC for the politically motivated assault. They each face 10+ years in prison.

The victim says he forgives his attackers, but hopes they become more tolerant of opposing viewpoints. pic.twitter.com/gYA0zKt0nF

Proving themselves to be cowards, the two “suspects attempting to hide among a group of children playing basketball,” police said. “The suspects were taken into custody and transported to the Central Processing Unit where they were charged accordingly.”

Mr. Mable, who is Catholic, explains he has already forgiven his alleged attackers but does hope they become more accepting of people with opposing viewpoints. As for his MAGA hats (he owns two) Mable says he will continue to wear them in public.

“They felt like a black man should not be wearing a Trump hat because it’s like when you are black, you have to be a Democrat,” said Mable, who has a laceration of his nose and lingering pain in his jaw. “I’ll wear it again. The movement is still going on, Trump is still in power and in 2020 we will win again.”

Sadly, the Democrats are the party of hate in America, and “tolerance” is not in their tool kit.

Crawford was charged with robbery, conspiracy to commit robbery, attempted theft $100 to under $1500, 2nd Degree Assault, and malicious destruction of property.

Roberson was hit with robbery, conspiracy to commit robbery, attempted theft $100 to under $1500, and 2nd Degree Assault.

Each could receive as much as 10 years in prison if convicted.

Good people of the U.S. are hoping these 2 parasites get the full 10+ years sentence – glad the victim was able to da pave himself & spread the news of the hate the #DemocRats spread & incite to their violent & intolerant supporters

The two cowardly attackers probably won’t learn their lesson because the Democrat Party teaches them that anyone who disagrees with their political positions is evil.