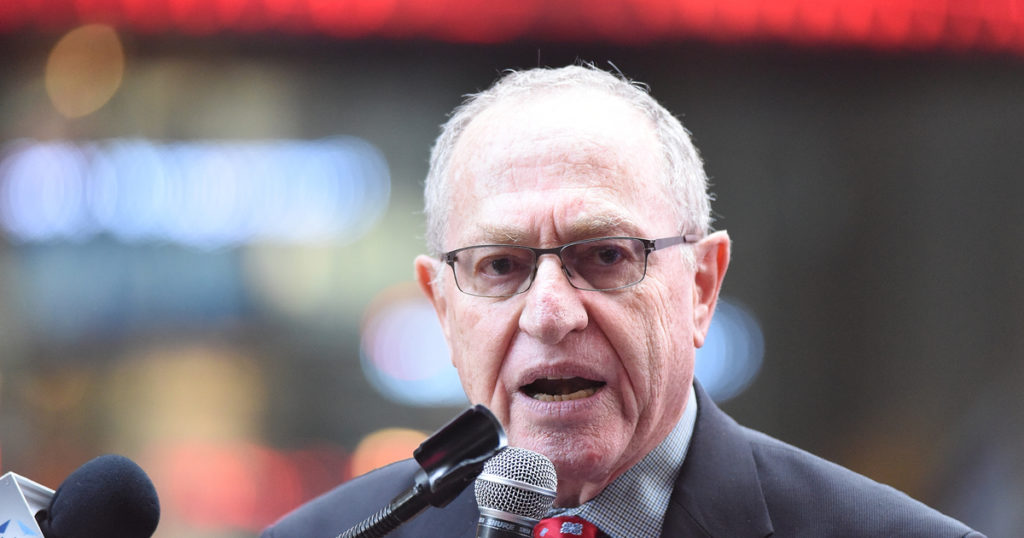 Dershowitz wrote about his frustrations in a recent op-ed at Fox News:

In his testimony former FBI director James Comey echoed a view that I alone have been expressing for several weeks, and that has been attacked by nearly every Democratic pundit.

Comey confirmed that under our Constitution, the president has the authority to direct the FBI to stop investigating any individual. I paraphrase, because the transcript is not yet available:  the president can, in theory, decide who to investigate, who to stop investigating, who to prosecute and who not to prosecute.  The president is the head of the unified executive branch of government, and the Justice Department and the FBI work under him and he may order them to do what he wishes.

As a matter of law, Comey is 100 percent correct.  As I have long argued, and as Comey confirmed in his written statement, our history shows that many presidents—from Adams to Jefferson, to Lincoln, to Roosevelt, to Kennedy, to Bush 1, and to Obama – have directed the Justice Department with regard to ongoing investigations. The history is clear, the precedents are clear, the constitutional structure is clear, and common sense is clear.

Yet virtually every Democratic pundit, in their haste to “get” President Trump, has willfully ignored these realities.  In doing so they have endangered our civil liberties and constitutional rights.

Now that even former Director Comey has acknowledged that the Constitution would permit the president to direct the Justice Department and the FBI in this matter, let us put the issue of obstruction of justice behind us once and for all and focus on the political, moral, and other non-criminal aspects of President Trump’s conduct.

The release of former FBI director James Comey’s testimony on Wednesday was received with the same breathless reactions that have long characterized coverage of the Russian investigation. CNN ran comments that the Comey testimony was nothing short of the Watergate tapes.  The desire for some indictable or impeachable offense by President Trump has distorted the legal analysis to an alarming degree. Analysts seem far too thrilled by the possibility of a crime by Trump. The legal fact is that Comey’s testimony does not establish a prima facie — or even a strong — case for obstruction…

Turley went further and argued that the liberals who were demanding that Trump be prosecuted for some imaginary crime they had no proof he had committed are actually engaging in exactly the same behavior that they have been accusing President Trump of engaging in.

Ironically, those who want a criminal charge on this record are committing the very offense that they accuse Trump of committing: disregarding the law to achieve their desired goal. It would be a highly dangerous interpretation to allow obstruction charges at this stage. If prosecutors can charge people at the investigation stage of cases, a wide array of comments or conduct could be criminalized. It is quite common to have such issues arise early in criminal cases. Courts have limited the crime precisely to avoid this type of open-ended crime where prosecutors could threaten potential witnesses with charges unless they cooperated.

We do not indict or impeach people for being boorish or clueless … or simply being Donald Trump.

While the brilliant Dershowitz and Turley seem to agree that there is simply no basis for charges of obstruction, CNN’s resident legal analyst Jeffrey Toobin doesn’t agree. In Toobin’s words, “If that (Trump’s comments on Flynn) isn’t obstruction of justice, I don’t know what is.”

When Dershowitz was asked about Toobin’s comments on the matter, he chuckled and mentioned that Toobin had once been a student of his, and that this analysis was a “C- answer.”

That’s a C-minus. I think Jeffrey got an A+. He was a really good student. But that was a C-minus answer.

He could have said to Comey: Your investigation of Flynn is over. I am now pardoning him. End of it. I am doing what George Bush I did. I’m pardoning him. That is my power. Is that obstruction of justice?

Can a president be indicted for exercising his power of pardon?

Of course not, unless he was bribed to do it… or some other independently criminal act. But Jeffrey, great guy, very smart… He’d probably give me a D+ on my analysis, but he was the student and I am the teacher.

The point here is that while Toobin uses innuendo to support his case, Dershowitz and Turley rely on precedent and the law. Toobin doesn’t like Trump’s behavior and so he has already decided that Trump must be guilty, for the other legal minds, facts are what is most important. Wouldn’t it be nice if more liberals cared about facts?