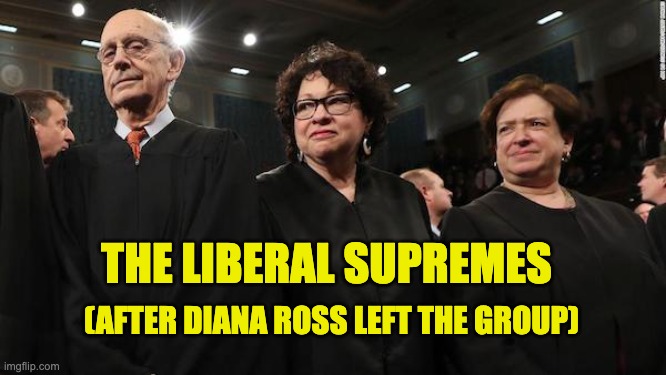 The Supreme Court’s three liberal justices made a series of head-shaking comments during last week’s oral arguments over two of President Joe Biden’s vax mandates which were so embarrassing even the corporate media fact-checker called them out. The comments and claims made by the trio of Stephen Breyer, Elena Kagan, and Sonia Sotomayor were incorrect, ignorant, misinformed, or hysterically exaggerated.

Justice Sotomayor, in particular, is a poster child of the threats posed by fake news and identity politics.

Justice Sotomayor became fodder for viral internet memes when she said, “We have over 100,000 children, which we’ve never had before, in serious condition and many on ventilators.”

According to the Department of Health and Human Services (HHS), only about 3-thousand children are currently in the hospital because of COVID.

When Justice Stephen Breyer weighed in, he suggested the Occupational Safety and Health Administration (OSHA) rule was needed because “hospitals are full almost to the point of maximum” and that “750 million new cases” had been reported in the US yesterday. Even though the population of America is around 330 million.

In addition, information from HHSshows that nearly 21 percent of inpatient beds and more than 18 percent of ICU beds nationwide were unoccupied as of Friday.

Sotomayor, who did not join her eight colleagues on the bench for the arguments, but opted to take part remotely, at one point, claimed that implementing the requirement for businesses was necessary because “Omicron is as deadly as Delta … we have hospitals that are almost at full capacity with people severely ill on ventilators.”

Sotomayor said at another point in the argument that “I’m not sure I understand the distinction why the states would have the power” to institute a rule like the one being pursued by the Biden administration, “but the federal government wouldn’t.”

“Read the Commerce Clause and the 10th amendment, lady,” snapped Republican political consultant Liz Mair on Twitter. Indeed, the amendment in question states that “powers not delegated to the United States by the Constitution, nor prohibited by it to the States, are reserved to the States respectively, or to the people.”

During arguments, in that case, Kagan said that workers “have to get vaccinated so that you’re not transmitting the disease that can kill elderly Medicare patients, that can kill sick Medicaid patients. I mean, that seems like a pretty basic infection prevention measure.”

Finally, Sotomayor asked why OSHA, which the Biden White House has charged with implementing the business rule, could not consider a person infected with COVID-19 to pose the same danger to colleagues as a machine emitting sparks.

That caused another uproar on social media, with National Review writer Michael Brendan Dougherty tweeting: “I love the idea that an Executive branch agency meant to protect worker’s rights is now adopting the argument that workers should be regulated like toxic chemicals.”

While this type of fake news is all over the internet and corporate news sites, it is shocking when it comes from Supreme Court Justices. It appears the three liberal members of the court live in a world of fake news. And the fact that Justice Sotomayor refused to leave her chambers and be a part of the hearing further compounds her isolation. She clearly is not getting her information from a variety of sources and people.

This is among the most serious of the many threats our nation faces. The supposed intellectual giants of the Supreme Court are dangerously detached from reality, choosing to consume fake news and working in COVID isolation. We cannot trust these people to make judgments that affect our individual liberties and freedoms.

Sotomayor didn’t even understand the difference between the powers of the states and those of the federal government. Every American student learns that in 9th-grade civics, or at least they used to. Her ignorance questions why she is even on the court and how she was selected. Was she chosen by President Barrack Obama based on her ethnicity and gender?

Friday’s hearing makes clear she was not selected for her keen intellect. And that is the danger of identity politics. It can result in political leaders who are not up to the job, as Sotomayor clearly is not.