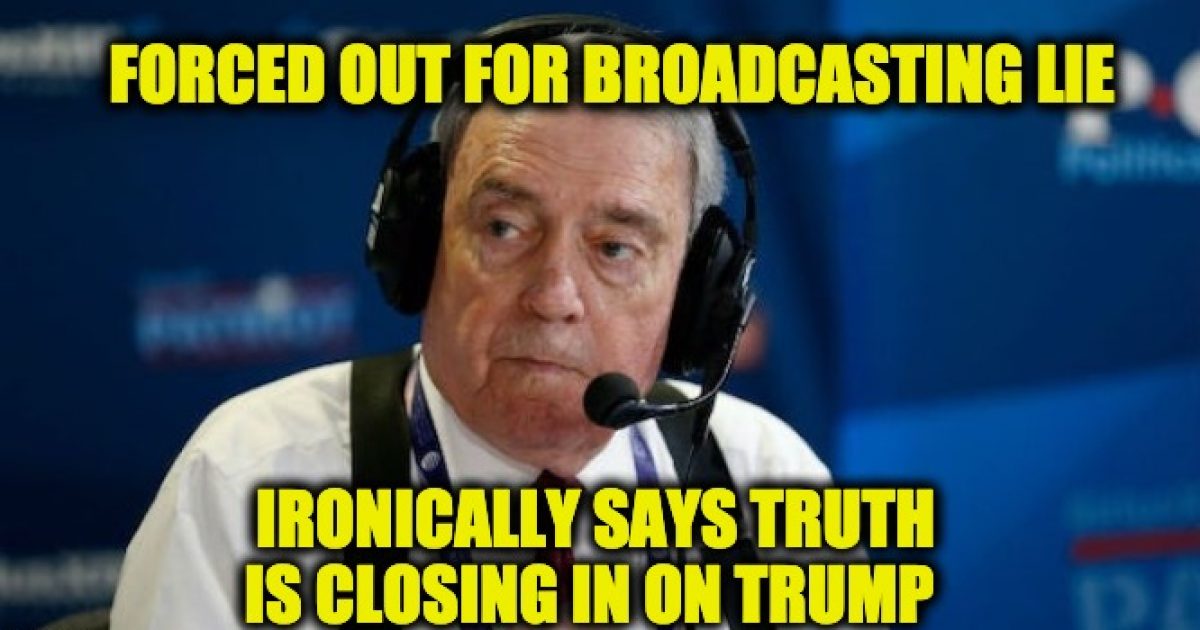 Gee whiz, CNN is really scraping the bottom of the barrel.  On Brian Stelter’s show Sunday (which is the bottom of the barrel) CNN scraped even lower when proven liar Dan Rather was asked to comment truth and the Trump impeachment hearings.  Yes, the same Dan Rather, who was forced to resign because he filed a false report about Bush #43 just before the 2004 election with the hopes of changing the expected results. Rather’s presence proves that Stelter doesn’t give a rats arse about the truth, as Rather still believes the lie he broadcast in 2004 in an attempt to foil Bush #43’s reelection.

Speaking about the past week’s impeachment hearings, Rather said:

It’s becoming increasingly apparent that truth is closing in. Truth does matter. And there’s been this feeling for a long time that well, the White House with this alternative narrative, a false narrative and with its allies in prime time on Fox was at least in a standoff with truth.

I think we’ve seen the last few days, as to say, truth has begun to close in. Facts are beginning to matter. The difference between facts and the truth, people under oath and the false narratives that have been put out in way of defense is beginning to tell.

Now, whether it’s making a deep enough impression on public opinion to convince enough in the Republican Party in power to begin to say to themselves, “look, we have to fall in behind the truth.” I have some doubts, which is it say the Republican Party as a whole and in particular members of the Senate and the House and Republican Party are standing with the President. They are complicit in what he’s doing. And as long as they are, then this false narrative, in which it’s very easy to give false equivalence to the false narrative may yet reassert itself.

Truth? False narrative?  Dan Rather wouldn’t recognize the truth or a false narrative if it wore a sign and kissed him on the lips.  The man still says the false tale he presented to the American people is accurate.

Rathergate as the scandal is called, turned out to be the largest, most damaging journalism scandals from the time television began broadcasting news to the media’s support of the false Russiagate and/or Ukraine scandals.  Dan Rather presented a report that was an out-and-out lie, and almost changed the results of a presidential election.

On September 8, 2004, less than two months before the 2004 Presidential Election, Dan Rather and his “60 Minutes II” producer  Mary Mapes presented a falsified story about George W. Bush going AWOL and receiving special treatment in the Texas Air Nation Guard. The report led to Rather’s entire production team was fired and Rather, the anchor who was the face of CBS, who replaced the exalted Walter Cronkite, resigned from the nightly news. His career was in ruins.

The Rathergate scandal was one of the first significant stories discovered by the blogging community.  Charles Johnson published a story on his site, “Little Green Footballs,” showing that the documents which were supposedly written in 1973 saying Bush went AWOL (known as the Killian documents), was typed in a font that wasn’t available until almost 30 years later, proving that Rather’s story was based on a fraudulent letter.

He published the GIF below showing the old font vs. the one that was used:

CBS did its own investigation. They named former Pennsylvania governor and U.S. Attorney General Dick Thornburgh and retired Associated Press president-chief executive Louis D. Boccardi to an independent panel charged with finding the truth about President Bush’s National Guard service, and the Rather report.

The report, which was issued on Jan. 10, 2005, concluded that CBS News failed to follow basic journalistic principles in the preparation and reporting of the Sept. 8, 2004 broadcast about President Bush’s service in the National Guard. According to the report, the most severe defects in the reporting and production of the Bush segment were:

With his discussion about truth with Dan Rather, a proven liar, Brian Stelter proves once again he doesn’t care about the truth, he just wants to attack President Trump.

A video of the Stelter/Rather discussion courtesy of Newsbusters follows: