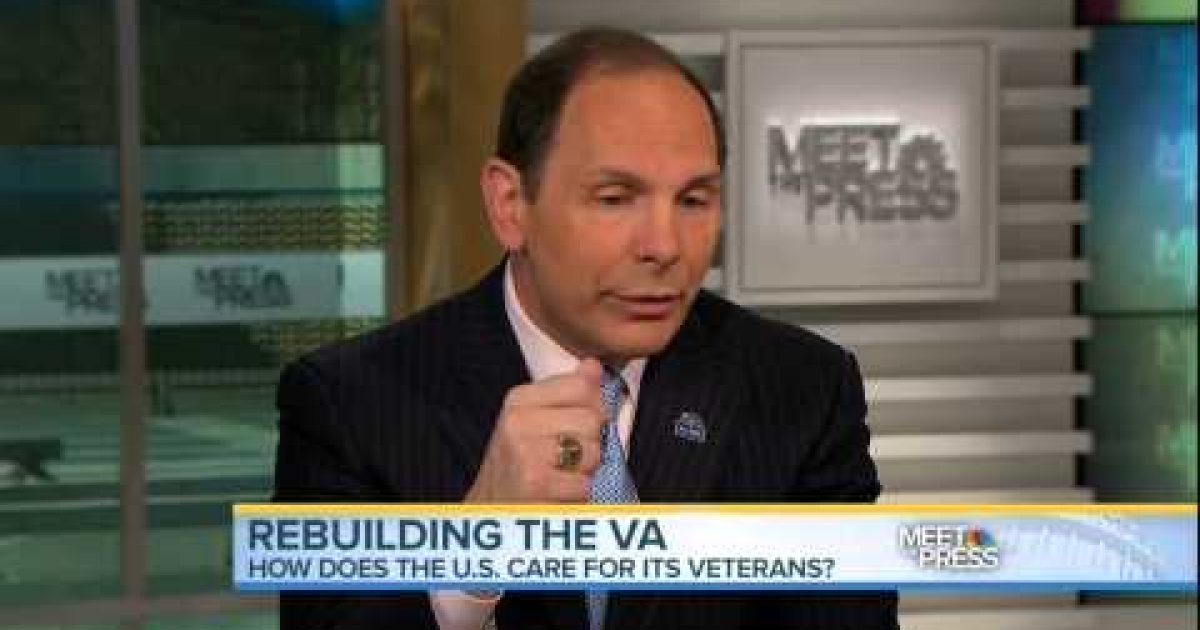 Facebook Twitter Flipboard
Six-months into his new Job, Robert McDonald is already lying to the American public. Glenn Kessler, the Washington Post fact checker, says Robert McDonald, the Department of Veterans Affairs Secretary, was not being honest when he told Chuck Todd on Meet The Press, “Nine hundred people have been fired since I became secretary. We’ve got 60 people that we fired who have manipulated wait times.”

On the February 15 Meet the Press, Chuck Todd asked Secretary McDonald about the dust-up he had with Rep. Mike Coffman ­(R-Co) during a recent House hearing. Coffman suggested that McDonald had done little in his six months running the V.A., McDonald retorted that he ran a large company and asked what Coffman had ever run (see video below).

In his conversation with Todd, McDonald insisted the department was making progress and referred to the firing numbers above.

Checking the facts, Kessler writes that the 60 firings number was closer to eight, a lot less than 60.

Disciplinary actions for 75 employees have been proposed since June 3, 2014, according to the VA’s most recent weekly briefing to the House and Senate committees on veterans affairs. These actions were related to patient scheduling, record manipulation, appointment delays and/or patient deaths. The proposed actions included removals, admonishment (a written letter of censure), reprimand (a stronger letter of censure), suspension of less than two weeks and probationary termination. Admonishment or reprimand letters can be removed from employees’ personnel files after two or three years.

Of the 75 employees, only eight employees have actually been removed, as of Feb. 13, 2015. Twenty-three cases were pending. Five employees resigned before a decision was made on their case. Others were demoted, were on probationary termination, had some other disciplinary action, or had no action taken at all.

As for the 900 employees being fired since mid-2014, Hutton said those employees have been fired for cause “either through removal action or during a probationary period.” Most of the 900 employees were with the Veterans Health Administration, and vary in location, pay grades and reasons, Hutton said. Reasons include poor performance and absenteeism.

But to McDonald’s point that he is cleaning up shop, the 900 figure lacks context. Senior executives have known problems existed there, and the 900 employees are not those executives.

The VA is the largest Cabinet agency with more than 340,000 employees as of September 2014. That means even if 900 employees were fired, they accounted for less than 0.3 percent of all VA employees. Plus, in fiscal year 2013, there were 2,247 VA employees fired in one year, which was two and half times more than McDonald’s 900 figure – and that was before a massive systemic problem was found

Kessler summed up by awarding McDonald four Pinocchios, his highest level of lying.

The public expects accuracy as the agency works to restore credibility. It is especially important for McDonald to be precise about his terminology–and to provide truthful information to the public. He earns Four Pinocchios for wildly inflating his “firing” statistics.

Despite being entangled in a scandal involving malfeasant employees for much of the year, the Veterans Affairs Department fired about half the number of workers in 2014 than it did the previous year, according to agency and other federal data.

VA terminated about 1,100 employees last calendar year, the agency told Government Executive, down from 2,247 in fiscal 2013. The fiscal 2013 data come from the Office of Personnel Management and measure total firings from Oct. 1, 2012, through Sept. 30, 2013. The calendar year 2014 data was provided by VA, which could not offer an explanation for the drop off.