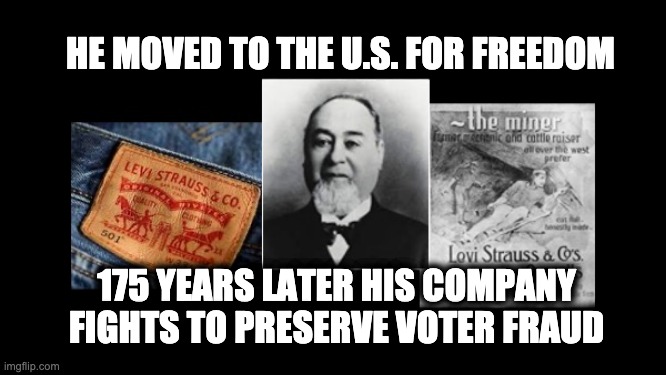 Free enterprise advocates participating in annual shareholder meetings of corporations like Levi Strauss, whose CEO called the new Georgia election integrity law racist. Yet, one conservative shareholder group who attended the meeting claimed the CEO could not explain exactly why he thought the voting law was racist.

Davis Soderberg of the Free Enterprise Project (FEP) asked Levi Strauss CEO Chip Bergh, “Can you explain specifically how requiring voters to show ID to avoid fraud is racist, and also your timeline for ending all Levi Strauss requests for ID from job candidates, employees, visitors to your facilities, and attendees at your annual shareholder meetings, in conformance with your race-based claims?”

Soderberg said it was clear Bergh did not want to answer the question, and his response sounded canned. “These CEOs seem to have pre-written and pre-approved responses to every topic, and then, regardless of the specific questions that are asked on that topic, they will just give a broad answer and move on. They hate having to answer difficult questions pressed upon them by their shareholders.”

Here is how Bergh responded to Soderberg’s question—a non-answer, answer:

“I think it’s important we step back because I think there are some things that all Americans should be able to agree on. First and foremost, that voting is not a partisan issue, but it’s an American issue, that the right to vote is central to democracy. I like to say, ‘democracy only works if every eligible voter votes.’

“And we must come together as a country to protect that right. Democracy needs to work around a free, fair, and equitable assess to the polls. As a company, we’ve been focused on voting and access to voting since before the midterm elections in 2018. We’ve participated in an organization called [MakeTimeToVote.org] with PayPal and Patagonia and enlisted over 2,000 companies to join us in giving employees time off to vote on Election Day.

“The 2020 election had the most Americans vote than any prior election. And it had the highest percentage of eligible voters voting in 120 years. And, definitely, it has been one of the safest and most secure elections in the history of voting in this country. Any step backwards is a step away from democracy. Our focus has been advocating for voting rights and civic participation, and actively supporting organizations that are working to dismantle barriers to voting designed to disenfranchise communities of color and others in low-income areas. We need to do more. For us, that includes ensuring our advocacy and grant-making focused on voting addresses the wave of discriminatory laws in states like Georgia, but also in states where we have large populations of employees like Texas, Florida, Mississippi, and Kentucky.

“Right now, there are more than 350 bills moving in 47 states that are designed to restrict voting access. These bills are racist and undemocratic. And by the way, I’ve never said anything about voter ID. So, we are focused and join with more than 170 other companies in signing onto business statements with the civic alliance, calling on lawmakers around the country to set aside partisan politics and work together to pass laws that make voting safe and accessible to everyone. And we’re supporting federal legislation like the John Lewis Voting Rights Advancement Act to ensure that all voters can participate in their democracy free from discrimination.”

Here’s the audio of the non-answer answer:

Soderberg’s organization, which is part of the National Center for Public Policy Research, believes corporations should be politically neutral. “Many woke corporate CEO’s use their decision-making power to satisfy their own personal political desires, which often don’t align with their shareholders’ beliefs. Our advocacy work at the Free Enterprise Project is to help shareholders voice their conservative values and stand up to these self-righteous business executives.”

Soderberg explained that for years left-wing coalitions have been investing in companies and pushing their radical agendas upon them. He said that the conservatives are behind in this movement. “Right-of-center investors have failed to actively engage in shareholder meetings and corporate governance in the past. It’s time we start playing hard-ball just like the left-wing shareholder coalitions.” Soderberg continued, “the FEP and the Back to Neutral coalition are leading the charge in that fight, but we need all conservatives’ hands on deck to counter the leftward march.”

“Many Americans are just now waking up to the fact that American corporations are falling victim to leftism,” Soderberg added. “The shareholder activists on the left have become very powerful. These CEOs are snuggling up to groups like As You Sow to slingshot a far-left agenda that does nothing to solidify the long-term growth for their businesses. Shareholders must be aware of this reality and start holding corporate leaders accountable.”

In addition to the Levi Strauss shareholder meeting, FEP representatives attended several other corporate shareholder meetings this week, including Coca-Cola’s and Bank of America’s, all companies whose CEOs came out in opposition to Georgia’s voter integrity laws.

Soderberg’s colleague, Scott Sheppard, said many of these CEOs are now “retreating or petulantly repeating generalized talking points without being able to identify any single provision that triggers their objections. This has been a vital demonstration of the dangers, risks, and errors of ‘woke’ capitalism. Calling a state’s voting laws illegitimate and even racist is a really big deal. It is not a move that competently run companies would rush into given the risks of embarrassment, alienating key stakeholders, and demonstrating their incompetence beyond a narrow focus on the businesses they run.

“If these companies have been misidentified as having opposed the Georgia voter law, it should say so plainly,” added Shepard. “If they were properly identified and now have backed off, they still owe the people of Georgia an apology for labeling the state. These companies should rethink their commitment to knee-jerk reactions to profound civic issues.”

Americans for Limited Government President Rick Manning said this is just the kind of citizen and shareholder activism that is needed to hold these elitist CEOs accountable.

“For too long, we have ceded too much ground to the Left,” Manning said. “I’m thrilled to see groups on the right start to ask these CEOs tough questions. Anyone who owns stock in a company is eligible to ask a question in these shareholder meetings. I encourage everyone to get involved this way and try to steer these woke companies back to being politically neutral.”

Recognizing the anti-liberty liberty’ woke corporations threaten America’s future, the ACU announced the establishment of The Center To Protect Voters and Their Voices.