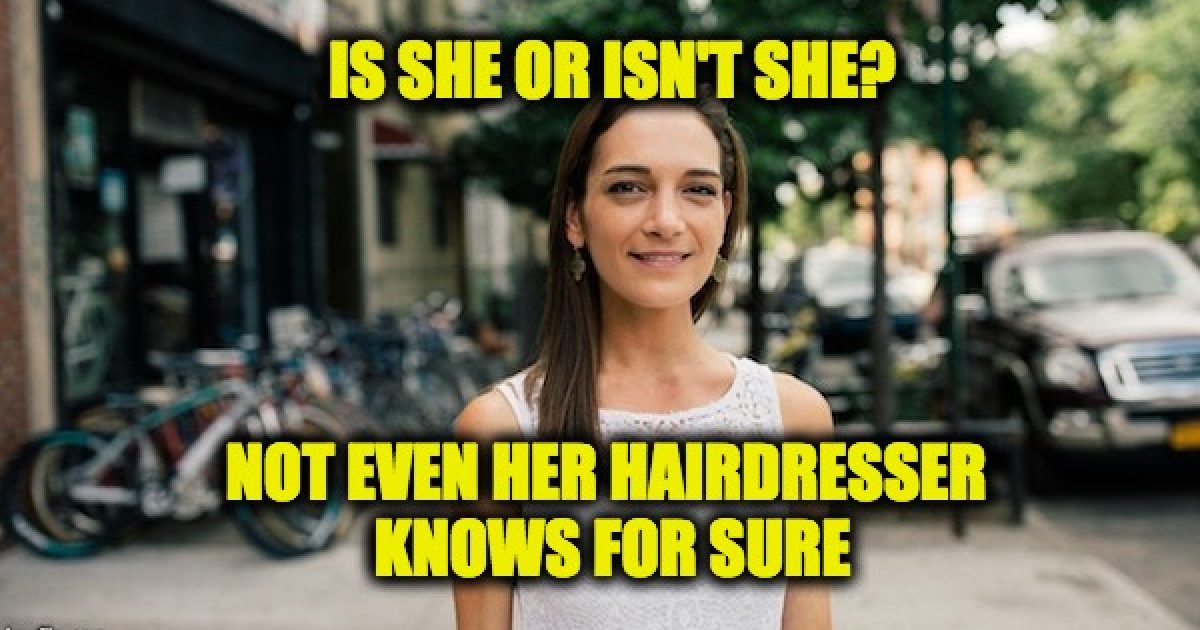 As the great Jimmy Durante said, “Everybody wants ta get inta da act!” Brooklyn’s Democratic-Socialist candidate for the Democratic Primary in New York’s18th Senatorial District Julia Salazar claims to be Jewish, but that claim doesn’t seem to be Kosher.

Salazar is trying to do what Alexandria Ocasio-Cortez did in June’s Congressional primary, that is to use a socialist philosophy to defeat a well-established Democratic Party incumbent. In Salazar’s case the incumbent Martin Malave Dilan who has been in the State Senate since 2003.

Because of the success of Ocasio-Cortez, and the similarity of what they are trying to achieve Julia Salazar has received much press, especially from Jewish sources. On the one hand, her claim to be a Latina Jew is appealing to Jews in her district and beyond. The fact that she has been a successful professional appeals to the young voters in her district.

Allison Kaplan Sommer in the Israeli paper Ha’aretz explained that Salazar is “one of the first politicians to embody the new breed of far-left Jewish activist engaged in ‘Jewish resistance’ politics.” This includes the endorsement of the Democratic Socialists of America’s support of the boycott, sanctions and divestment movement against Israel. Based on political trends this is popular across liberal youth of all faiths including many Jews. And while not officially supporting the BDS movement, the entire Democratic Party has been moving toward an anti-Israel position for over a decade, so she is in compliance with the entire Democratic party

So being an extreme leftist, Jewish Latina professional woman, who supports the anti-Semitic BDS movement covers all the bases for many of the Democratic Party voters in her district. There’s only one problem, while Julia Salazar claims to be Jewish, if she is really genuinely Jewish, this Yid will eat his lid.

In mid-July Ms. Salazar told The Forward, she:

“came from a unique Jewish background. She was born in Colombia, and her father was Jewish, descended from the community expelled from medieval Spain. When her family immigrated to the United States, they had little contact with the American Jewish community, struggling to establish themselves financially.”

In college, Salazar claimed to have become an advocate for criticizing Israel, opening up a J-Street chapter at Columbia University and writing for the anti-Israel website Mondoweiss.  She explained to The Forward, that her Jewish identity, “propelled her into politics.

Gee that sounds like great training for what she is today, but not so fast.

But an article in The Tablet last week exposed her real background. It explained that Salazar was actually born in Miami, neither of her parents were Jewish, was a practicing Catholic until six years ago, and used to be a pro-Israel conservative.

After seeing The Tablet piece, she admitted on her website that she was born in Miami,

“As I stated clearly in a transcribed interview with reporter Emma Whitford on May 5th, at the outset of my campaign, I made it crystal clear that I had been born in Miami. I also confirmed this fact to the JTA earlier this week, when I realized that there was ambiguity about where I’d been born.”

She may have told the truth about her birth in May but doesn’t remove the fact that she has always described herself as an immigrant, and in July she told The Forward she was an immigrant from Columbia.

“Some have attempted to question whether I am Jewish. I have never demanded or expected that everyone recognize and accept my Jewish identity.

Well except for this?

In the State Senate race in District 18, only one candidate has the chutzpah we need in Albany: @SalazarSenate18. #JewsForJulia pic.twitter.com/zD1gWnIfES

My religious and spiritual life have never been a focus of my campaign for State Senate. I can only point out that the article that provoked this is clearly politically motivated, seeking to discredit my conversion and my Jewishness in a misguided attempt to attack my credibility as a progressive candidate.”

She went on to claim that the attack on her Jewishness was based on a racist view of “who is a Jew” from those who reject Jews of color, and those who claim Jewishness through patrilineal descent.

Of course, no one cares about the pigment of her skin, she is being attacked because it seems as if she is lying. The traditional Jewish view is that “Jewishness” is passed down through the mother. But even if she wants people to accept the “either parent” view of Reform Judaism, she would still have a problem, because her father wasn’t Jewish either.

Per the Tablet, the evidence shows Salazar had a Christian upbringing; her father was a practicing Catholic until the day he died, and her mom is an Italian-American and a practicing Christian.

“A 2009 funeral notice for her father, a former commercial airline pilot named Luis Hernan Salazar, indicates that the service was held at the Prince of Peace Catholic Church in Ormond Beach, Florida.”

When Julia Salazar was 21 (she’s now 27), “Salazar had both the politics and religious beliefs of a conservative Christian. In a series of tweets preserved by pro-Israel activist Hen Mazzig, Salazar quotes a pastor at Apostles Church in New York in a tweet that includes the hashtag #John13, referring to a chapter in the New Testament. “A thought I plan to ruminate on this week:” she tweeted in September of 2012, “Follow #Christ for his own sake if you plan to follow Him at all,” quoting the 19th-century Anglican Bishop J.C. Ryle. One acquaintance who knew Salazar during her time as Christians United for Israel activist said that she wasn’t shy about her religious faith, dropping the occasional “praise Jesus” into casual conversation.”

She even appeared on the Glenn Beck show as a representative of Christians United For Israel.

The Tablet called, Alex Salazar, the candidate’s older brother and the operator of some Florida mango farms [who according to the reporter didn’t seem to know much about his sister’s campaign]. Alex Salazar said, “one of their father’s brothers was a Jesuit priest” There was nobody in our immediate family who was Jewish … my father was not Jewish, we were not raised Jewish,” he said.”

“Their mother, Christine Salazar, indicated in a public September 2012 Facebook post that she planned on attending services at the Brooklyn Tabernacle, a nondenominational evangelical church in downtown Brooklyn.”

According to the Gothamist, Salazar also served as the president of Columbia Right to Life and actively fought against abortion services being paid for by Columbia Students. She held that position at least through the first week of April 2013 when she penned a pro-life op-ed for the school newspaper.

So, it sure seems that based on her history and that of her parents, her “Jewishness” is a political convinces, She told JTA, “I went through a conversion process with a Reform rabbi at [Columbia-Barnard] Hillel in 2012.” She also said, “I don’t really bother to consider it a conversion because many people don’t respect Reform conversion.”

It’s hard to believe she converted in 2012 as based on her tweets she was still “praising Jesus” in September of 2012. Are we to believe that sometime during the last three months of that year she had an epiphany, and this heavy-duty Catholic decided to become a card-carrying Jew. Maybe she went to a Jewish friend’s house for Rosh Hashana dinner and came to the conclusion that any faith that combines brisket and a million carbs is the one for her.  But I doubt it.

Based on his funeral and her brother Alex’s testimony, the Brooklyn Socialist’s claim that her Father was a Jew seems to be a lie. And she never claimed her mother was a Jew. Based on the fact that she was still wearing her Christianity on her sleeve in September of 2012 and trying to sell a pro-life position in April of the next year, her supposed conversion doesn’t pass the smell test either.

Why is this important?  The image she is trying to sell, an extreme leftist, sometimes immigrant, Jewish Latina, professional woman, who supports the anti-Semitic BDS seems to be a paper tiger, she is not an immigrant, she is not Jewish, and her left-wing positions on issues such as abortion and BDS seem to be as new as her registration in the Democratic Party. She was a registered Republican until 2017.

You may agree with the positions Julia Salazar has today.  But the real question is can you trust her? She has switched positions which is typical for a politician but lying about whether she is an immigrant, and more importantly, her faith seems to be well over the line.

But I have a proposal a way to work things out. If Julia Christine Salazar wants to continue claiming to be Jewish, let her–or at least we Jews shouldn’t dispute it. But only if she agrees to a quid pro quo.

According to the Talmud before it approves the conversion, the Beit Din  (rabbinical court) should ask, “What reason have you for desiring to become a proselyte; do you not know that Jews at the present time are persecuted and oppressed, despised, harassed and overcome by afflictions?”

How perfect! Let’s take the Talmud one step further. If Salazar wants to claim she is Jewish, we should give her our blessing. But before we do, she must hold a little press conference and accept the personal blame for everything—every anti-Semitic slander

Julia Salazar should announce that it is she, not all of the Jews, who has control over the media. It’s a believable concept. Let’s face it; anybody who read that bull-story in The Forward will be able to accept that the only way her fake bio could have gotten past the get past the editors is if she controlled the media. 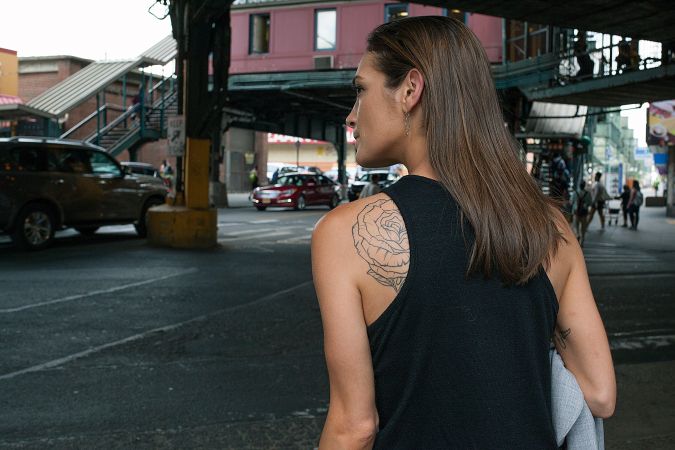 Salazar has a giant tattoo of a flower on her left shoulder even through Judaism forbids tattoos. But perhaps we Jews should tell her all is well, just as long as she can call the members of the Congressional Black Caucus and convince them to renounce Louis Farrakhan. And why not add in the demand that she tells people that her campaign is funded by all those non-Jews who are the ones that really control all the banks.

Come to think of it that wouldn’t be a bad thing, either.