Lebanon Plays With Fire and Gets Burned

One of Israel’s Mistakes in last summers Lebanon War II, or whatever they are calling it these days, was they kept waiting for the non-Hezbollah part of the government to “rise up” and come to Israel’s side. After all, the terrorist Hezbollah/Syria alliance had assassinated their leadership and done their best to disrupt the fledgling Lebanese democracy. But like Nixon’s silent majority thirty years ago, this Lebanese silent majority did not act. And maybe their reluctance to stand up to the terrorist bullies was justifiable. Maybe they we just too frightened at the strength of the Hezbollah/Syrian alliance and its growing military strength. The problem is that showing fear to wild animals and terrorists is the best way to guarantee an attack. That is what Lebanon has been dealing with for the past few days. Chaim at Freedom’s Cost has the full story of the battles in Lebanon over the past few days. You can find his posts here and here.

The bottom line is that instead of standing up for themselves, this past summer the Lebanese government played with the fire of terrorists. Today they are getting burned. And don’t look to the UN or the Arab League for help, they are more frightened by the terrorists than you are.

The Lebanon Front
By Dr. Walid Phares
FrontPageMagazine.com | May 22, 2007

Sunday in northern Lebanon, a group named Fatah al Islam conducted several attacks against the Lebanese Army killing up to 25 soldiers and losing up to 15 members in addition to civilian casualties. The fighting is still raging at this hour. This security development, which could be happening in many other spots in the troubled Middle East, from Iraq to Gaza, and from Somalia to Afghanistan, has however a special dimension. It signals in fact the opening of a new front in the War with al-Qaeda Terror: Lebanon. Here are the reasons Fatah al Islam is based in the Palestinian camp of Nahr al Bared in Northern Tripoli, Lebanon’s second largest city with a Sunni majority. The group is an offshoot of another group, Fatah al Intifada, both dissidents from the Palestinian Authority headed by Mahmoud Abbas and both importantly backed and financed by Syrian intelligence. But Fatah al Islam, formed last November and headed by Palestinian-born Shaker Absi, is linked directly to al-Qaeda. Absi was a colleague of Jordanian-born Abu Musab al-Zarqaqi who was killed by an U.S. air raid last year. Since its inception, Fatah al Islam has told its supporters and the population in its areas of training and operations that follow the Jihad of al-Qaeda.

Fatah al Islam aim at creating an “Emirate” (an Islamist principality, as in the Taliban model) in the Sunni areas of Lebanon, and is planning on conducting operations similar to the ones in the Sunni Triangle of Iraq. But according to the Lebanese government and terrorism experts, the group is being secretly supported by the Syrian regime of Bashar Assad. The question arises in the West about the logic of having a so-called “secular” Ba’athist regime supporting an “Islamic fundamentalist” organization. First, the Ba’athist logic is to use groups not necessarily carrying its Pan-Arab ideology to attack the regime’s foes and achieve strategic goals: For decades, the Hafez al-Assad regime supported and used the national-socialist SSNP (Syrian neo-Nazi organization), the Christian war lord Frangieh, the Maronite militiaman Elie Hobeika, Arab Socialist factions, the Shiia Jihadist Hezbollah and, most importantly, a roaster of Jihadi Sunni networks. From Tripoli to Sidon, the Assads regime manipulated Harakat al Tawheed al Islamee and the Gamaat Islamiya, both al-Qaeda-like Jihadists. Inside the Palestinian camps of Lebanon, the Syrian Mukahabarat remote controlled many groupings – Jihadist in their ideology and outlook, but feeding from the Baathist machine.

The Fatah al Islam is one of the latest marriages of convenience between a group of committed Jihadists, rotating in al-Qaeda’s constellation but gravitating around Damascus influence. The group accepts Bashar’s support and the Syrian regime tolerates the organization’s “Sunni” outlook: Both have a common enemy, even though they may come at each other’s throats in the future. The men of Bin Laden anywhere in the world, including in Lebanon, have the same standing order: Bringing down the moderate Arab and Muslim Governments (even in multiethnic societies) and replace them with Emirates. The men of Bashar Assad and Mahmoud Ahmedinijad have converging goals, bring down the democratically elected government in Lebanon and replace it with a Hizbollah-Syrian dominated regime, as was the case before 2005. Thus, both “axis” have one objective in Lebanon: crush the Seniora Government. They will take all their time to fight each other after. 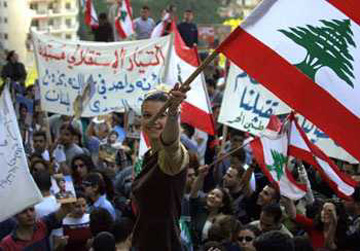 Yesterday’s clashes between the al-Qaeda linked terror network and the Lebanese Army are a prelude to terror preparations aimed at crumbling the Cedar Revolution, in both government and civil society, this summer. It is a move by the Assad regime to weaken the cabinet and the army in preparation for a greater offensive later on by Hezbollah on another front. In short, the Damascus-Tehran strategic planners have unleashed this “local” al-Qaeda group in Tripoli to drag the Lebanese cabinet into side battles, deflecting its attention from the two main events threatening Assad: the forthcoming UN tribunal in the assassination case of Rafiq Hariri, and the pending deployment of UN units on the Lebanese-Syrian border. Both developments can isolate the Syrian regime. Thus, the Fatah al Islam attacks can be perceived as part of a preemptive strategy by the Tehran-Damascus axis. But the results, if the Lebanese Army fails to contain the terrorists, could be very serious to the Seniora Government and the UN. Worse, if the first piece of a Sunni Triangle is put in place in Lebanon, this could affect the geopolitics of the War on Terror globally: The rise of Salafi Jihadism along the coasts of Lebanon, from Tripoli to Sidon, passing by Beirut. This Emirate-to-be could become the closer strategic enclave of Bin Laden to the US Sixth Fleet, Europe’s cities and Israel.

The United States and the West are now faced with a new development which they cannot allow to grow unchecked: an al-Qaeda base on the Eastern Mediterranean. The strategic responses are only two: Reshape the Lebanese Army to face off with the Jihadists and deploy multinational forces on the Syrian Lebanese borders as soon it is possible. The Seniora Government also has work to do: It must without hesitation call on the UN Security Council to deploy forces on the borders, in application of UNSCR 1559 and under Chapter 7. The three main leaders of the parliamentary majority supporting the cabinet have opened the path for such a move: Saad Hariri, the leader of the Sunni community, has blasted Fatah al Islam as a threat to Muslims; Walid Jumblat, leader of the Druses and Socialists, has already been calling for a UN military intervention; and last but not least, the various Christian parties opposed to Assad have accused the Syrian regime of igniting terror. All planets are now aligned for a successful move against al-Qaeda in Lebanon, before it is too late. But the question is: will the Lebanese politicians seize the moment?

Putin Offers to Trade Cyber Criminals if Biden Agrees to Hand People Over to Russia
June 13th, 2021 Flag And Cross