Leakers Aim At Trump, Only To Hit Themselves – And (Maybe) Israel 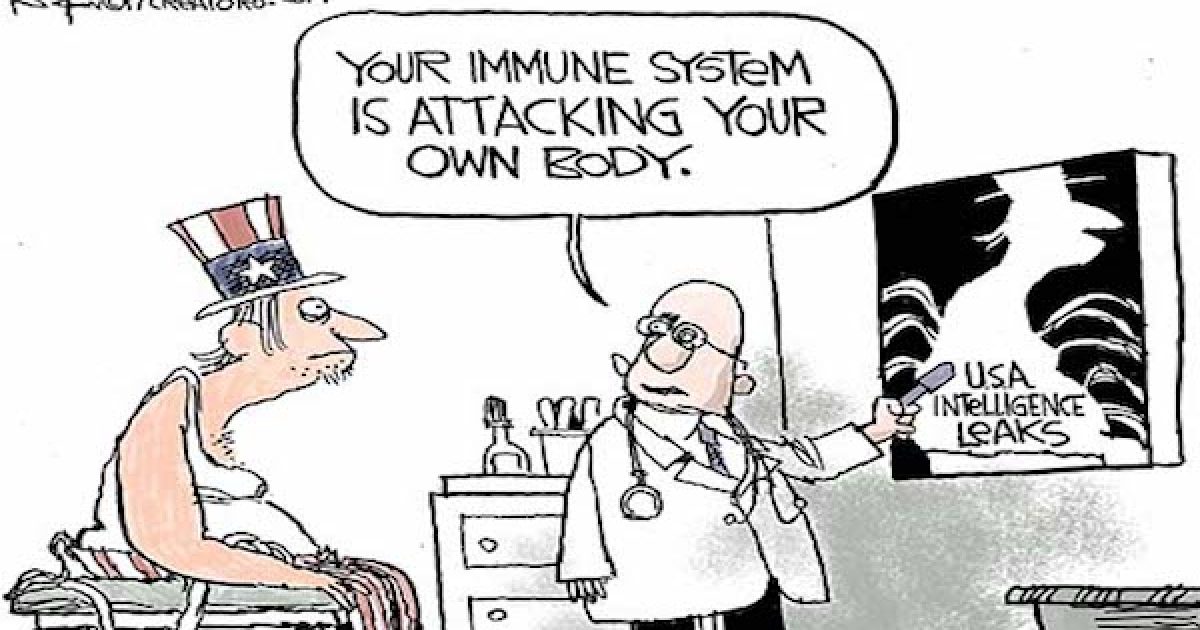 It’s not clear why this narrative created by leakers is being trotted out again since it was silly the first time and hasn’t gotten better with age.  One passage in the new piece suggests a reason, and I’ll get to that at the end.

But for whatever purpose, Vanity Fair saw fit this week to run with an article by Howard Blum about the May 2017 meeting with Russian Foreign Minister Sergei Lavrov, in which Donald Trump spoke about the ISIS bomb plot that prompted the laptop ban announced in March, for flights coming from some foreign locations.

At the time, news outlets including the Washington Post and New York Times reported (from unnamed sources) that Trump had revealed “sources and methods” information to the Russian delegation, including clues that Israeli intelligence had played a key role in uncovering the bomb plot.

At some point, the media narrative came to revolve around the specific claim that Trump had revealed which city in Syria the plot was uncovered in.  This was breathlessly implied to be a red-hot clue that gave the game away to the visiting Russians.  The media outlets didn’t even name the city at first, although they quickly got around to uttering the syllables: “Raqqa.”

H.R. McMaster, the national security adviser, threw cold water on the whole story, including the name-of-city detail, stating categorically that (a) Trump hadn’t even been briefed on any sensitive “sources and methods” related to the laptop-bomb plot (and thus didn’t know anything too sensitive to tell the Russians about); and (b) the Russians would have known everything Trump told them from publicly-available information – including the data point on Raqqa.

I made that very case at the time, pointing out that Raqqa was one of the most obvious places to look anyway.  The public had been aware for months that ISIS had a known Al-Qaeda bomb-maker working with them, and that the terror group was plotting against airliners.  None of this was news.

What the leakers and the media achieved with this little episode was telling the Russians what Trump did not tell them, according to McMaster and other U.S. personnel present: that Israel had a role.  (And we still have no independently verifiable evidence that that is true.  It certainly could be, but a well-intentioned person would hope it isn’t, since leaking information about it to the media would be a felony, for anyone who signed a government-administered oath with either the U.S. or Israel to guard such information as a secret.  For what it’s worth, Jordan chimed in at the time to insist that Israel was not the source of the laptop-bomb intel.)

Now the narrative is being recycled, and the same effect is kicking in.  This time around, there is more detail about an Israeli operation said to have occurred at the end of February 2017, in which Israeli special forces were inserted into Syria.

I have to say right up-front that the tale of the operation could be valid, but could also have been written based on web research.  Every aspect of it could have been sourced from accounts of old operations, and information from Wikipedia.

But let’s say the details did come from professional knowledge of how the Israelis conduct such operations.  If that’s the case, then the leaker has revealed himself as either the Fourth Stooge of intelligence leakers, are as a vicious criminal seeking to compromise Israeli operations.

Maybe there wasn’t any felonious intent.  Let’s assume that second possibility away.  In that case, it would be pretty incompetent to seek to convey the significance of what Trump said and only succeed in spilling your guts on what you know about Israeli special operations.

The impression left by Blum’s piece, in the latter case, is that that’s exactly what someone did.

If the objective was to hammer Trump for exposing sensitive intelligence details, the new leak utterly failed.  Howard Blum’s article doesn’t finger Trump as having revealed the information about Israeli intel ops.  It’s clear that the operational details about the supposed February mission were reconstructed for the Vanity Fair story:

It was a covert mission whose details were reconstructed for Vanity Fair by two experts on Israeli intelligence operations.

It is nowhere alleged that Trump passed on any of this to the Russians.  In fact, the Blum narrative builds up to its crescendo only to reveal the following about what Trump supposedly slipped to Lavrov in the May meeting:

The president did not name the U.S. partner who had spearheaded the operation. (Journalists, immediately all over the astonishing story, would soon out Israel). But, more problematic, President Trump cavalierly identified the specific city in ISIS-held territory where the threat had been detected.

What motive do the leakers have for flogging this story?  We have to judge from the effect they seem to seek to dirty up Trump, and highlight details about Israeli activities that would be compromising – if these are legitimate leaks of information that’s supposed to be kept secret.

Neither goal inspires confidence in the leakers.  Here’s the passage I mentioned at the beginning, which inspires, if possible, even less.  Blum gives a brief history of the relations between U.S. and Israeli intelligence, and then recounts an exchange meeting at CIA headquarters in January 2017:

[A] small group of Mossad officers and other Israeli intelligence officials took their seats in a Langley conference room on a January morning just weeks before the inauguration of Donald Trump. The meeting proceeded uneventfully; updates on a variety of ongoing classified operations were dutifully shared. It was only as the meeting was about to break up that an American spymaster solemnly announced there was one more thing: American intelligence agencies had come to believe that Russian president Vladimir Putin had “leverages of pressure” over Trump, he declared without offering further specifics, according to a report in the Israeli press. Israel, the American officials continued, should “be careful” after January 20—the date of Trump’s inauguration. It was possible that sensitive information shared with the White House and the National Security Council could be leaked to the Russians. A moment later the officials added what many of the Israelis had already deduced: it was reasonable to presume that the Kremlin would share some of what they learned with their ally Iran, Israel’s most dangerous adversary.

Two things about this paragraph.  One, as analyst Omri Ceren and others, have pointed out, this warning – if it was really given – amounts to the Obama administration urging the propaganda of the Steele dossier on one of our foreign allies, to foul its relations with the incoming president.

Understand how bad this is. Steele dossier was Russian info op.

Some US intel official
1- pushed it on Israel
2- said Israel should cut back intel sharing, which is critical to US security, bc of it

Who was it? Career or Obama political appointee? Still have the job? https://t.co/j9agiZdkua

Two, what Blum’s source describes is not how it’s done.  To say that is not to say the exchange didn’t happen.  It is to say that if it did happen, it was an off-the-wall-crazy thing to do, and indeed, constitutes the opposite of credible evidence that Obama administration authorities should be taken seriously in their suspicions about Trump.

If the U.S. intelligence community has a good-faith concern of such an explosive nature about the incoming administration, the right thing for senior officials to do, before communicating that to representatives of a foreign country, would be to clear it with the president they currently serve.  Then the very highest level of official would let his personal counterpart in the foreign country know of his concerns, informally and off the official record.

Intel being what it is, a DCI or DNI might even make the communication on his own authority, whether the president had cleared it or not.  In that case, he’d be double-sure to do it off the record.

What would not be done about such a highly abnormal communication is what Blum reports: dropping it like a neutron bomb into a routine working-level exchange meeting.

That’s deliberately toxic under any circumstances and sounds definitively more like planting it with malice aforethought than like giving friends a well-intentioned warning.

We can hope that the meeting described by Blum didn’t really go down that way.  Maybe something got lost in the translation.  Because if it did really happen that way, there’s a whole brigade of Stooges out there running U.S. intelligence – or, sad to say, something much worse.