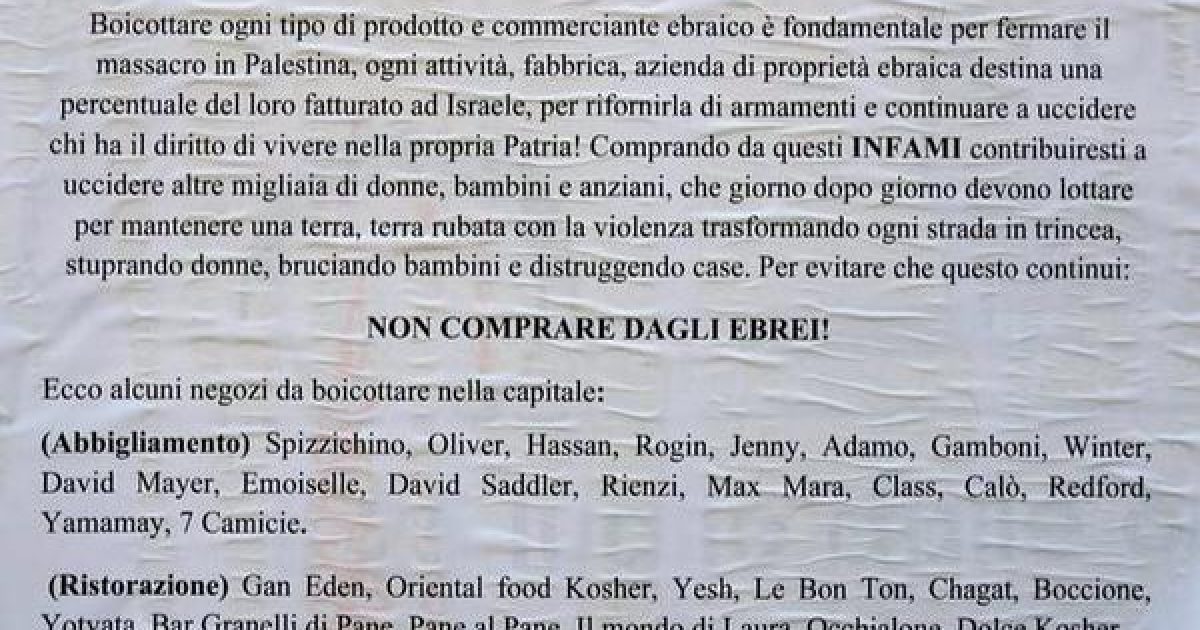 Adding to the Antisemitism sweeping Europe, leaflets urging a boycott of Jewish-owned stores in the capital of Italy were discovered plastered on walls in the Jewish San Giovanni neighborhood of Rome on Saturday. The flyers listed more than 50 clothing stores, butcher shops, restaurants and bars, and hotels, which, they said, were owned by Jews.

According to the “International Herald Tribune,” the flyers, signed by extreme-right group Vita Est Militia, said that “boycotting any type of Jewish product of business is fundamental to stop the massacre in Palestine” and claimed that “every shop, factory and business under Jewish ownership sends a percentage of its profits to Israel”.

Buying from these INFAMI [villains] means contributing to kill thousands of other women, children and elderly who have to fight day by day to maintain their land, which was pillaged transforming every road in trench, raping women, burning children and destroying houses.

The full poster is embedded below.

The president of Italy’s Union of Italian Jewish Communities, Renzo Gattegna, said the flyers were “an alarm bell that cannot be ignored” and suggested that although they were signed by a far-right faction, they may have linked to far-left ones in a common anti-Semitic cause as some of the language on the posted leaflets was similar to that of the far-left groups.

We are witnessing with concern the solidifying of the extremist underworld in the name of a common anti-Jewish and anti-Israel hatred, whose most violent mode of expressions, still partially latent, risks forming a danger to the entire national collective.

Rome’s mayor, Ignazio Marino condemned the incident, saying that the language used in the posters “echoes the anti-Jewish blacklists of the Nazi period”. The flyers were removed shortly afterward.

Gattegna thanked the Italian authorities for acting in this and all recent anti-Semitic incidents for sharply condemning the vandalism, removing graffiti and flyers and ordering police investigations. According to “JTA” three extreme right-wing activists are under investigation for scrawling anti-Semitic graffiti in Rome at the end of July. One example, “Anne Frank storyteller,”(picture above) appeared on Rome’s Appia Nuova Street.