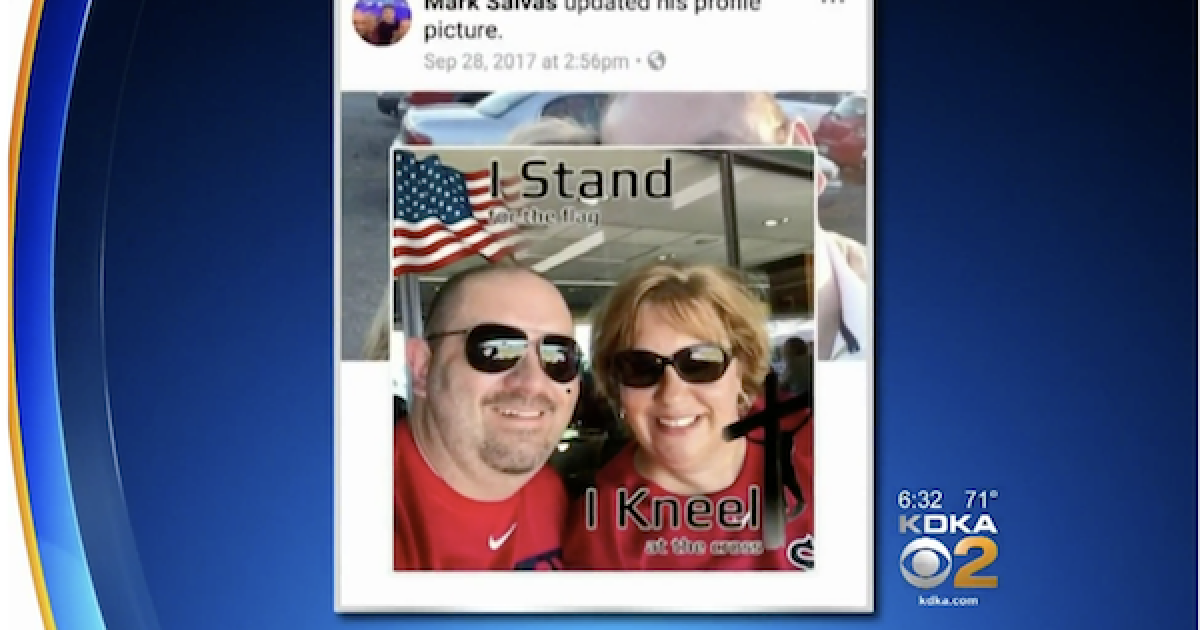 Can we question their patriotism now?  Last Wednesday, CBS Pittsburgh reported that Mark Salvas was forced to resign his position as executive director of the local Democrat Party over two social media posts, one of which defended a police officer and another in which he expressed patriotism and a Christian worldview, something the modern Democrat Party apparently will not tolerate.

“I was asked by the chair of the Allegheny County Democratic Party to resign my position due to the controversy that was taking place on social media, and I did,” he said. “It’s never easy when people you have never met accuse you of things and call you names, and you’ve never met them.”

Welcome to the modern left…

According to CBS Pittsburgh:

A former Marine and Gulf War veteran, Salvas was just hired in September as executive director of the county party, long after he posted a picture of his wife and him on Facebook with the words, “I stand for the flag, I kneel at the cross.”

“I’m not ashamed of my patriotism, not one bit. I fought for this country. I think I have a right to have a voice and be patriotic,” says Salvas.

But he says NFL players can take a knee.

“That’s part of what the flag stands for. It gives them the right to do that,” says Salvas.

But Salvas chooses to stand.

Salvas: “I stand for the flag, I kneel for the cross.”

A second post — published by Salvas’ wife —  asks for support for the family of officer Michael Rosfeld, who is accused of killing Antwon Rose II.  According to the report, the two families are close friends.

Naturally, this didn’t sit too well with local leftists, who apparently think it’s inappropriate for a Democrat Party leader to express patriotism.  And it seems that state Rep. Ed Gainey, a Democrat who represents the state’s 24th Legislative District, agrees, saying the expression of patriotism offended an important segment of the Party.

Wow.  So, to be a Democrat Party leader, one has to eschew patriotism and loyalty to one’s friends just to show how sensitive one is to the various groups which make up the Party.

On the upside, though, Gainey admitted that Silvas is not a racist.  According to the report, Silvas “has a bi-racial child and African Americans in his family.”

Another Democrat, state Rep. Jake Wheatley, went so far as to say there’s no room for personal views, and his patriotism needs to be set aside.

“As an official, he has to be very careful and sensitive that his words and his posts are not necessarily just his. They are reflective of the party in its entirety,”  Wheatley said.

This, of course, speaks volumes about the modern Democrat Party, which has been castigated for embracing extremism and mob violence.  Additionally, Party boss Tom Perez has told us that socialists like Alexandria Ocasio-Cortez are the Democrats’ “future.”

This is also the Party which has said that it would seek to impeach newly-confirmed Supreme Court Justice Brett Kavanaugh, reverse the recent GOP-led tax cuts, works to abolish ICE while giving amnesty to illegal aliens and of course, impeach Donald Trump.

As Trump recently stated, the Party has gone “whacko” and is now too dangerous to lead.

“The Democrats have become too extreme. And they’ve become frankly too dangerous to govern. They have gone whacko. But if Democrats take control, they will try to reverse our amazing progress and plunge our country into gridlock, frankly into poverty, ultimately into chaos,” he said.