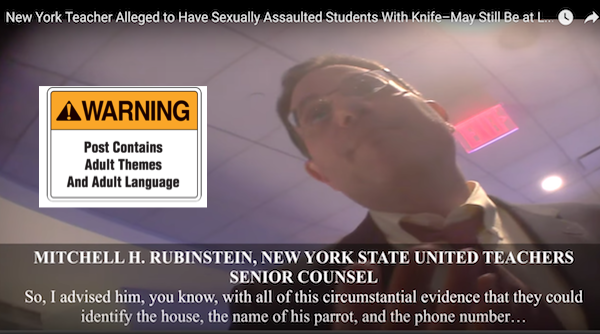 Everybody deserves a lawyer, but when a lawyer brags about using tricks to free a teacher accused of sexually abusing students, that lawyer is sick. Project Veritas released a video on Tuesday featuring attorney Mitchell Rubinstein from the New York State United Teachers describing a case in which a teacher was alleged to have forced students at knife-point to give him oral sex.

On the hidden camera video-taken at the union’s lawyer December 2015 holiday party Mr.Rubinstein describes a  case he defended twenty years ago. According to the attorney the Junior High School teacher named “Mike.”was accused by several students to have forced a student at knife-point or gun-point to give him oral sex.

There was strong evidence against the teacher in the case, including the students knowing the name of his pet parrot, the layout of his home and having his cell phone number:

“Okay, Mike, how do the students know your parrot is Petey? Okay? And he says, oh, easy, you know, kids like pets. I used pets like as a you know, motivation in teaching and everything…

According to Mitchell Rubinstein the courts also subpoenaed Mike’s phone records and found several calls from his home to the victim’s girlfriend, proving that he was in the house.

The attorney also brags about how the teacher was able to cheat a lie detector test.

Mitchell Rubinstein even admits that this is an absolutely egregious act.

“And I go to him, dude, you know, you’re going to go to jail if this goes bad, because like forced sec with like a minor. This is like the worst…you know, as bad as it gets.”

“But if he wanted to he still could? He’s not registered as a sex offender?”

“No, cause he wasn’t convicted. He resigned.”

During the last fifteen months Project Veritas spent time and money  to find the identity  “Mike,’…hundreds of man-hours of research, two private investigators hired but nothing was found.

After the months of research, a different Project Veritas journalist set up a meeting with Mitchell Rubinstein  to get more information.

Rubinstein corroborated his original story by telling it again, further verifying the voracity of the details. He again refused to tell Mike’s last name, but admitted that he does in fact know the last name. He also told us that he saw Mike some years later, handing out flyers in New York City announcing he planned to run for city council.

Because Project Veritas hit a brick wall in identifying Mike, O’Keefe decided that this information was too dangerous to keep hidden any longer. “We hope that by releasing this video, people will come forward and help us find Mike,” O’Keefe stated.

Below is the 16 minute undercover video, but before you watch, and/or before you share PLEASE remember the warning. As you may expect after reading the post: the video below contains adult themes and explicit language.

UPDATE Mitchell Rubinstein spoke to James O’ Keefe on the phone, he claimed that the lied the first two times and the incident never happened. However listen carefully he doesn’t say he lied, he says maybe he lied, he doesn’t say he was trying to impress a girl he said maybe he was trying to impress girl.  To be honest in THIS video below he seems like he lying