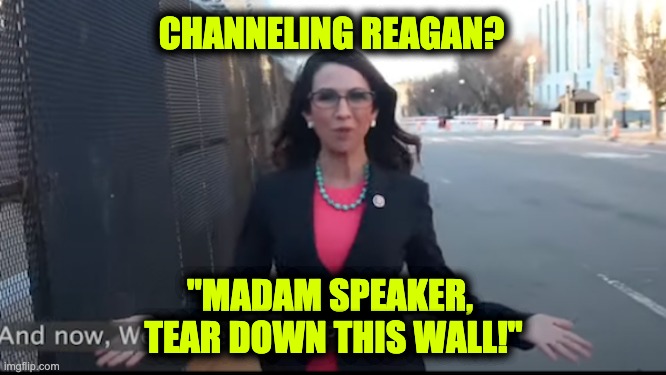 The Capitol complex has been fortified with thousands of National Guard troops since soon after the January 6th riot, and it’s been surrounded by razor wire fencing and locked down with manned checkpoints. And those troops aren’t even being treated humanely.

“President Trump built a big, beautiful wall because he loves America because he wanted to secure our country,” Boebert says in the video with the Capitol building in the backdrop. “Democrats – they fought him every step of the way.”

“And now, welcome to Fort Pelosi, where Democrats decry walls from within their own heavily guarded, razor-wire wall.”

“Democrats don’t want to protect you because they don’t care about you, but they’ll spare no expense protecting themselves,” she adds.

Secretary of Defense Lloyd Austin on Tuesday approved a request to keep over 2,300 National Guard troops on site until May 23rd. Their current stint was set to expire in mid-March.

Capitol police issued a brief statement thanking Austin for approving their request and “for the Department of Defense’s continued commitment to support our critical mission to protect Congress.”

It would seem Lauren Boebert’s request to “tear down this wall” isn’t about to happen anytime soon.

?NEW >> Pentagon extends National Guard deployment at the US Capitol for 72 days… Through May 23.

Per DOD statement, this will represent the current number of troops cut in half, to 2,300.@WUSA9 @CBSNews h/t @SSanchezTV pic.twitter.com/Aqgvrkr66S

Earlier this month, a task force empowered by Nancy Pelosi to review security following the Capitol riot on January 6th recommended the formation of a “quick reaction force” of federal officers.

Fox News reports that the task force made a series of recommendations, including “an increased National Guard presence,” “stocking up on mobile fencing,” and hiring nearly 1,000 additional USCP officers.

Fort Pelosi will be alive and well for quite some time.

Boebert’s request to tear down the Capitol wall comes just days after the alleged “plot to seize the complex on or around March 4” never materialized, leaving Democrats with egg on their face for canceling their work schedule.

In a recent interview, Congresswoman Eleanor Holmes Norton (D-DC) blasted Congress for being “afraid of its shadow” after the March 4th conspiracy theory fizzled.

“That’s why Congress has got to step in itself so that … we don’t militarize our Capitol.”

The continued use of National Guard troops as a prop by the Capitol police to appease weak-kneed Democrats over a singular incident is disgraceful.

The ‘wall,’ as it were, simply enhances the prop. It is a disgrace.

The security at the Capitol is something you’d expect to see at the southern border – where Biden’s Department of Homeland Security (DHS) Secretary Alejandro Mayorkas is currently begging for help with a surge of migrants – not at the Capitol.

Since inauguration day, it has been easier to illegally sneak into the United States via our southern border with Mexico than to take a picture of your family standing on the Capitol building lawn. There is currently a greater concerted effort to protect the People’s House from the American people than to actually protect the American people.