"If I Have To Move There [Utah] To Run Against Him In Four And A Half Years, I Will.” 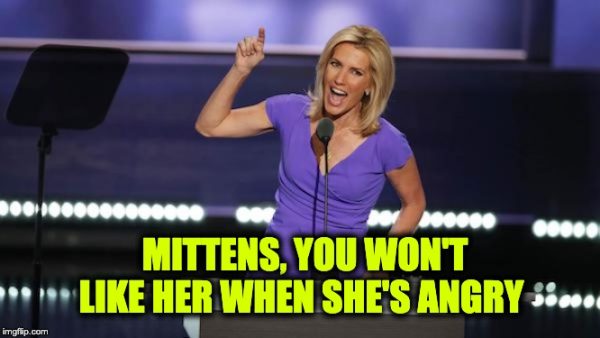 Fox News personality Laura Ingraham demanded Mitt Romney resign from the Senate after he joined Democrats in a vote to convict President Trump in the impeachment trial. Should he choose not to exit, Ingraham said she’d go so far as to move to the state of Utah to run against him.

In a segment on her show ‘The Ingraham Angle,’ the Fox host eviscerated Romney from top to bottom, referring to the Republican senator as “the ultimate selfish, preening, self-centered politician.”

“If he were up for reelection this year, the people of Utah would have their own payback against him because they were defrauded by Romney. For when he had to choose, he chose [Charles] Schumer and Kamala [Harris] over common sense and conservatism.”

“Mitt, you made your stand. Now you should resign. You committed a fraud on the people of Utah, on the Republican Party, on the Constitution, and thoroughly embarrassed yourself. If I have to move there to run against him in four and a half years, I will.”

Laura Ingraham says Mitt Romney should resign: "You committed a fraud on the people of Utah, on the Republican Party, on the Constitution" pic.twitter.com/c1pFKloKbH

Fraud on the People

Ingraham’s “fraud on the people” comment is a reference to Romney’s penchant for requesting help from President Trump and his supporters when it benefits him politically, then turning his back on them.

Why is Laura shocked?  Romney began to spew hatred of Trump as almost as soon as he locked up the GOP nomination.  Remember that March 2016 speech when Romney said Trump’s promises were “worthless,” described him as a “fraud,” and claimed that Trump was “playing the American public for suckers: He gets a free ride to the White House, and all we get is a lousy hat?” Romney hates Trump except when he needed him like when he begged Trump for the Secretary of State job or when he accepted the President’s endorsement of his candidacy for Senate.

After accepting Trump’s endorsement for his candidacy for Utah senator in 2018, Romney almost immediately wrote a scathing op-ed indicating the President had failed to live up to the “mantle” of the presidency.

The Senator from Utah also accepted Trump’s endorsement for him in the 2012 election. He met with him for consideration of being the President’s Secretary of State at one point. Now, he joins Democrats by demanding new witnesses in the trial, then votes to convict.

Mitt Romney absolutely despises that Donald Trump was elected POTUS & he was not. The sore loser mentality launched this sham impeachment & corruptly rigged & jammed it through the House. It looks like Schiff recruited himself a sore loser buddy on the GOP side to play along.

“Like all the other bitter ‘Never Trumpers,’ he’d rather see the entire American economy go down the drain than give Trump a victory,” Ingraham seethed.

And then, she posted a video that highlights his mendacity.

And now a special post-Trump acquittal tribute to Mitt Romney from his new “friends”: https://t.co/GmL9TlogP0

They Still Hate You, Mitt

Ingraham went on to explain that Romney had everyone fooled during his own presidential run in 2012.

“We thought you’d be better for America and the way you repay millions of people, the millions who did vote for you in 2012 is to throw in with the very people who don’t share our goals, who hate us,” Ingraham griped. “And by the way, who still hate you.”

Romney spoke on the Senate floor Wednesday, claiming he was going to vote his conscience and was prepared for any criticism he might face.

He was the only Republican to go alongside the Democrat witch hunt, voting to convict the President of abuse of power.

“The President is guilty of an appalling abuse of public trust,” Romney melodramatically insisted, despite the House failing to prove he was guilty of anything.

Trump’s son, Donald Trump Jr., called Romney a “coward” who is “blinded by hatred because he had his shot [and] he couldn’t do it.”