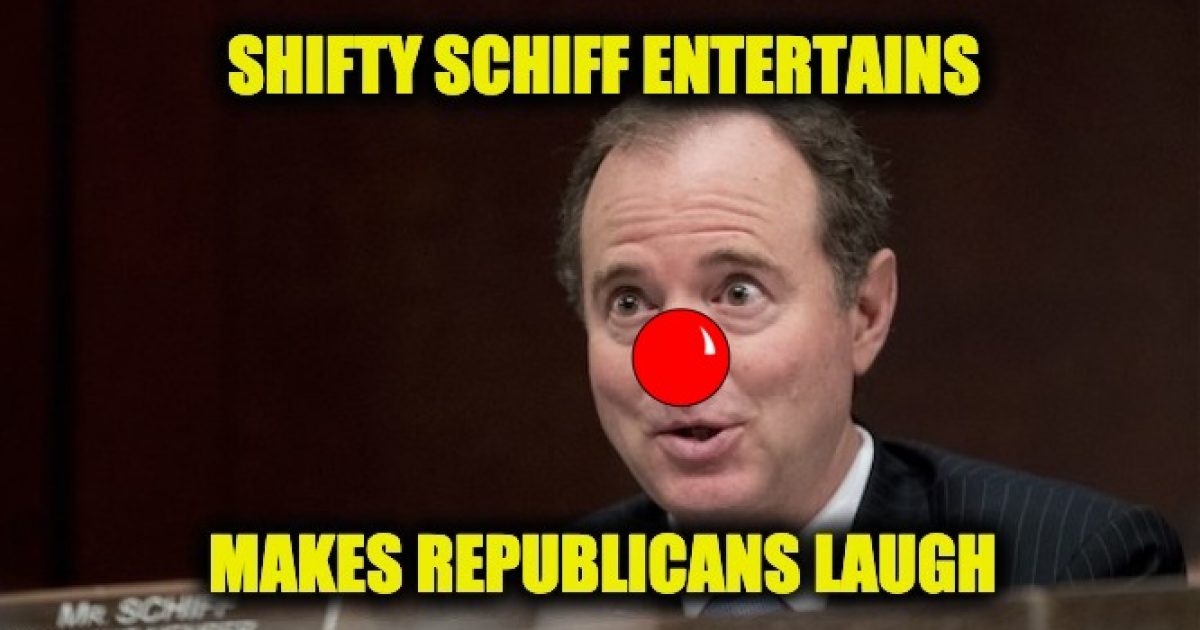 On Wednesday, Adam Schiff, the bug-eyed barrister of Burbank, whose leading the impeachment coup against President Trump, claimed that he has no idea who the whistleblower really is, even though his staff met with the individual and a previous report that his committee actually named the individual during a closed-door hearing. laugh at shifty Schiff

“Do you anticipate when we might vote on the ability to have the whistleblower in front of us… [Out of] the 435 members of Congress, you are the only member who knows who that individual is,” Rep. Jim Jordan said. “And your staff is the only staff of any member of Congress who’s had a chance to talk with that individual. We would like that opportunity. When might that happen in this proceeding today?”

“First, as the gentleman knows, that’s a false statement,” Schiff said. “I do not know the identity of the whistleblower, and I’m determined to make sure that identity is protected. But as I said… you’ll have an opportunity after the witnesses testify to make a motion to subpoena any witness and compel a vote.”

Republicans in the hearing laughed and sneered when Schiff delivered that lie.

Republican members of Congress in the audience laughed & sneered to each other when Schiff said this https://t.co/a0aRpspXtm

Schiff says he doesn't know the identity of the whistleblower, entire front row of republicans laugh.

The bug-eyed barrister may be losing his memory because in September he tweeted;

We have been informed by the whistleblower’s counsel that their client would like to speak to our committee and has requested guidance from the Acting DNI as to how to do so.

We‘re in touch with counsel and look forward to the whistleblower’s testimony as soon as this week.

Schiff and two other Democratic committee chairmen even issued a joint press release explaining why the anti-Trump complainant needed to testify to Congress.

“We need to speak with the whistleblower,” the top Democratic lawmakers wrote

But when it was revealed that Schiff and his staff had secretly coordinated with the whistleblower and urged him to file a formal complaint against Trump, Schiff and his media allies immediately changed course, declaring it would be dangerous and unprecedented for the complainant to testify publicly. Schiff then flip-flopped and insisted that the anti-Trump complainant be hidden from scrutiny.

Prior to the revelation that Schiff and his staff had secretly worked with the anti-Trump complainant before he even filed a complaint against Trump, Schiff repeatedly denied any contact with the complainant. To date, he has not explained why he lied about his secret interactions with the complainant, nor has he detailed the full extent of his coordination with him.

Schiff’s claims seem to clash with past statements he made about his staff having contact with the whistleblower and his admission that he should have been more transparent about the private encounter.

“I should have been much more clear,” Schiff said during an interview on CBS’ “Face The Nation.”

Fox News reported last month that the whistleblower did not disclose contact with Schiff’s staff to the intelligence committee inspector general (ICIG).

Schiff’s office acknowledged that the whistleblower had reached out to them before filing a complaint in mid-August, giving Democrats advance warning of the accusations that would lead them to launch an impeachment inquiry days later

Here’s the video of his claim:

Why Did Schiff Send Staffer To Ukraine To Meet Bill Taylor & Others At End Of August?

Schiff: Any Naming The Whistleblower During Hearings Will Result In Ethics Charges

SCHIFF KNEW: Had Account Of Whistleblower Complaint Before It Was Filed

Ukraine Has Evidence Their Govt. Colluded With Clinton Campaign