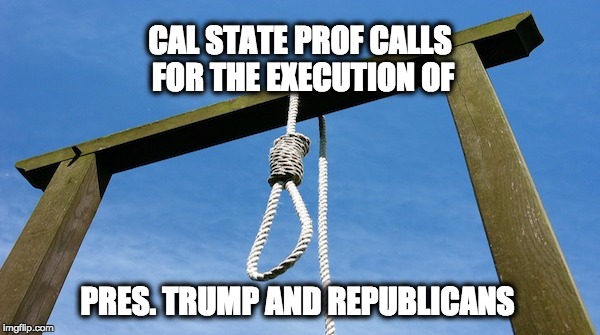 Scratch a liberal, find a bloodthirsty hatemonger.  On Friday, the Daily Caller reported that Lars Maischak, a history professor at California State University, Fresno, appears to have advocated for the murder of President Donald Trump, and called for the execution of Republicans to make up for illegal aliens deported from the country.

Tweets from an account purportedly operated by Professor Lars Maischak call for Trump to “hang” in order to “save American democracy,” and say the only “cure” for racist people is a bullet to their head. The account is not verified, although the bio and interactions between the user and other Twitter users indicate it belongs to the professor.

“To save American democracy, Trump must hang,” Professor Lars Maischak appears to have tweeted in February. “The sooner and the higher, the better. #TheResistance #DeathToFascism.”

To save American democracy, Trump must hang. The sooner and the higher, the better. #TheResistance #DeathToFascism https://t.co/DSsV53sbO2

He wasn’t finished, however.  “Has anyone started soliciting money and design drafts for a monument honoring the Trump assassin, yet?” the user wrote in another tweet a few days later, using the hashtag “TheResistance.”

#TheResistance Has anyone started soliciting money and design drafts for a monument honoring the Trump assassin, yet?

And he advocated murdering Republicans to make up for the deportation of illegal immigrants.

#TheResistance #ethniccleansing Justice = The execution of two Republicans for each deported immigrant.

#TheResistance Mercy towards racists was always the fatal weakness of good Americans. 1865, 1965, they left too many of them alive.

And he’s made it clear he absolutely hates Trump voters:

#TheResistance A democracy must not be tolerant of those who want to abolish democracy. It must vigorously defend itself. Ban the @GOP

And he’s compared Trump to Hitler, which is pretty standard liberal pap these days.

What ELSE – beyond Ghoulsuch – will it take for #Liberals to realize the #Constitution is rotten & does not merit their slavish affection?

If #Gorsuch gets onto #SCOTUS, it will be time to ditch the #Constitution as unsuitable for a democracy. Fascist Oligarchy for the 1%.

He is also not a big fan of Christianity:

If only Mary had had an abortion! We would have been spared this Clerical-Fascist crap. #HisGlory, my ass!

In short, this guy is a class A liberal hatemonger, right up there with the Virginia nut-job who said he’s okay with exterminating the millions of Americans in the NRA.

Maischak did not reply to multiple requests for comment.

A spokeswoman for CSU Fresno told The Daily Caller News Foundation Maischak’s comments on social media do not represent the university. “Lars Maischak is employed as a lecturer at Fresno State,” Kathleen Schock told TheDCNF. “Statements made on his personal social media accounts are his alone and are not endorsed by or reflect the position of the University.”