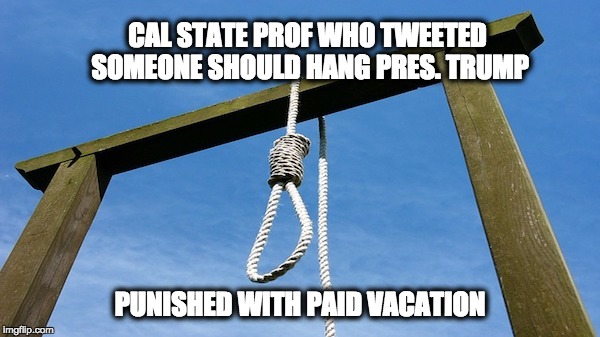 Well, we now we know how a California State University professor can get a long paid vacation….just call for the murder of the President and two Republicans for every illegal immigrant who is deported. Associated Press reports that Lars Maischak, the Cal. State Fresno professor who tweeted “To save American democracy, Trump must hang. The sooner and the higher, the better” and, “Justice = The execution of two Republicans for each deported immigrant,” among other disgusting tweets calling for violence, has been placed on paid administrative leave.  According to a university statement, Maischak has taken a voluntary leave of absence for the remainder of the spring semester. In other words the guy has been given a paid vacation until the news about his intolerance dies down.

Fresno State and History lecturer Dr. Lars Maischak have agreed upon a voluntary leave of absence for him for the remainder of the spring semester, effective immediately.

The agreement for the paid leave was reached in accordance with provisions in the collective bargaining agreement with the California Faculty Association, the union that represents all faculty. During his leave of absence, Dr. Maischak will no longer have a teaching role, but will be conducting research off campus.

Substitute faculty have been assigned to his five History 11 classes (American History to 1877) for the remainder of the semester so that students’ academic success is ensured.

The University’s review of this important matter continues. No further information can be shared at this time.

To save American democracy, Trump must hang. The sooner and the higher, the better. #TheResistance #DeathToFascismhttps://t.co/DSsV53sbO2

He wasn’t finished, however.  “Has anyone started soliciting money and design drafts for a monument honoring the Trump assassin, yet?” the user wrote in another tweet a few days later, using the hashtag “TheResistance.”

#TheResistance Has anyone started soliciting money and design drafts for a monument honoring the Trump assassin, yet?

And he advocated murdering Republicans to make up for the deportation of illegal immigrants.

#TheResistance #ethniccleansing Justice = The execution of two Republicans for each deported immigrant.

#TheResistance Mercy towards racists was always the fatal weakness of good Americans. 1865, 1965, they left too many of them alive.

And he’s made it clear he absolutely hates Trump voters:

#TheResistance A democracy must not be tolerant of those who want to abolish democracy. It must vigorously defend itself. Ban the @GOP

And he’s compared Trump to Hitler, which is pretty standard liberal stuff these days.

What ELSE – beyond Ghoulsuch – will it take for #Liberals to realize the #Constitution is rotten & does not merit their slavish affection?

If #Gorsuch gets onto #SCOTUS, it will be time to ditch the #Constitution as unsuitable for a democracy. Fascist Oligarchy for the 1%.

He is also not a big fan of Christianity:

If only Mary had had an abortion! We would have been spared this Clerical-Fascist crap. #HisGlory, my ass!

This is all from a guy hired to teach our kids history. Future history professors will now know the secret to getting a vacation with pay from Cal. State.