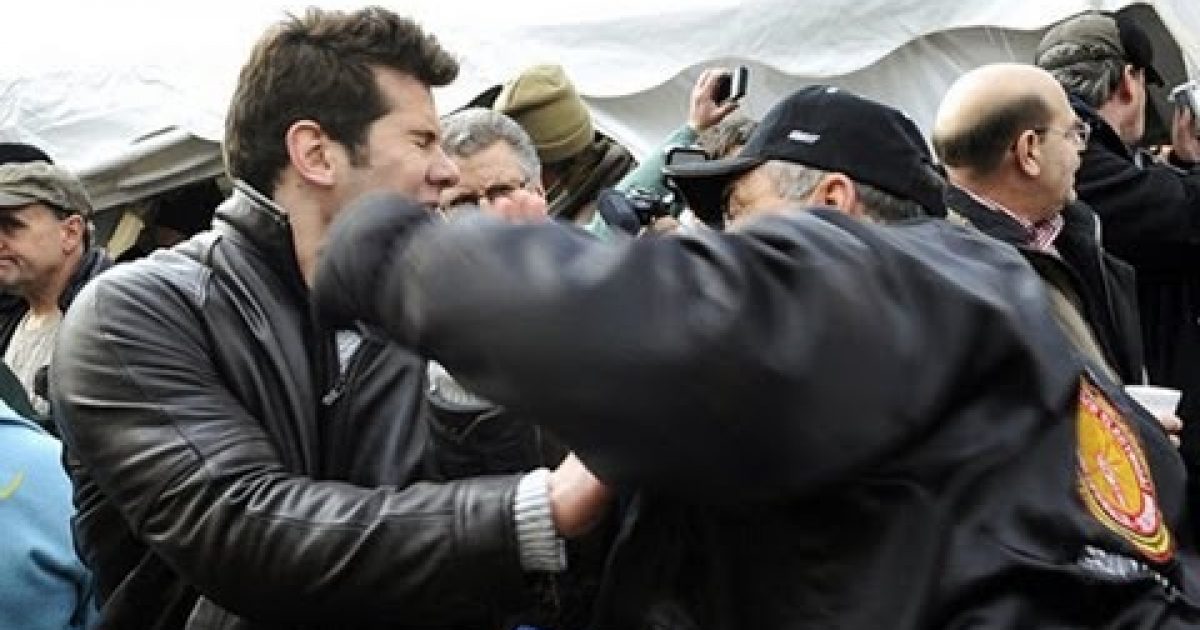 Note: There are six videos on this post..if you cannot see them please click here and view the post on “The Lid”


Yesterday outside the Michigan State Capital in Lansing, Americans for Prosperity had a tent where they staged a “counter protest” to the Unions who were against the Right to Work bill passed by the legislature.  The Union protesters decided the tent needed to be taken down.
Steven Crowder, who’s videos are always political and usually funny asked the union protesters why they were against the “Right to Vote” bill and asked them not to destroy the tent as there were seniors and women inside, not only was the tent destroyed but one union member who has been identified as Tony Carmargo sucker-punched Crowder chipping a tooth and giving him other minor injuries.  Another Union member Chris Opalewsky (visit his facebook page  and say hello here)was busily tearing down the tent and screaming “He’s Got A Gun,” in an attempt to incite a larger attack on Crowder.
Crowder, who is a mixed-martial arts enthusiast, smartly went no further than defending himself lest the wrath of thousands of union thugs would have been thrust upon him. Although he did make a little challenge on the Hannity Show

The violence against Crowder is nothing new, although you may not hear about it from the mainstream media.
Remember the Tea Party protest? Not only were they perfectly peaceful, but we cleaned up after ourselves.  That was until the Obama administration sent in the SEIU troops. It started with the indecent in Saint Louis, where Kenneth Gladney was attacked by members of the SEIU.
Then there was the rally in Thousand Oaks California were we learned  never say bite me to an Obama thug as a 65 year old man had his finger bitten off.

The Occupy Wall Street movement was racked with violence, and I am am not talking about the OWS on OWS crimes, beatings, rapes etc.   But violence against police officers for example, remember this protester from Occupy Portland who shoved a cop in front of a bus:

The point is we should be angry that Steven Crowder was attacked yesterday and thank God he is fine.  We should be even angrier at this continuing problem of violence by liberals/progressives at protests and the fact that the media doesn’t cover it and our government doesn’t protect the peaceful protesters.

Here’s a fun one…the Left is claiming AFP cut down its own tent and Crowder faked the violence.  My Friend Stacy McCain has the story here.