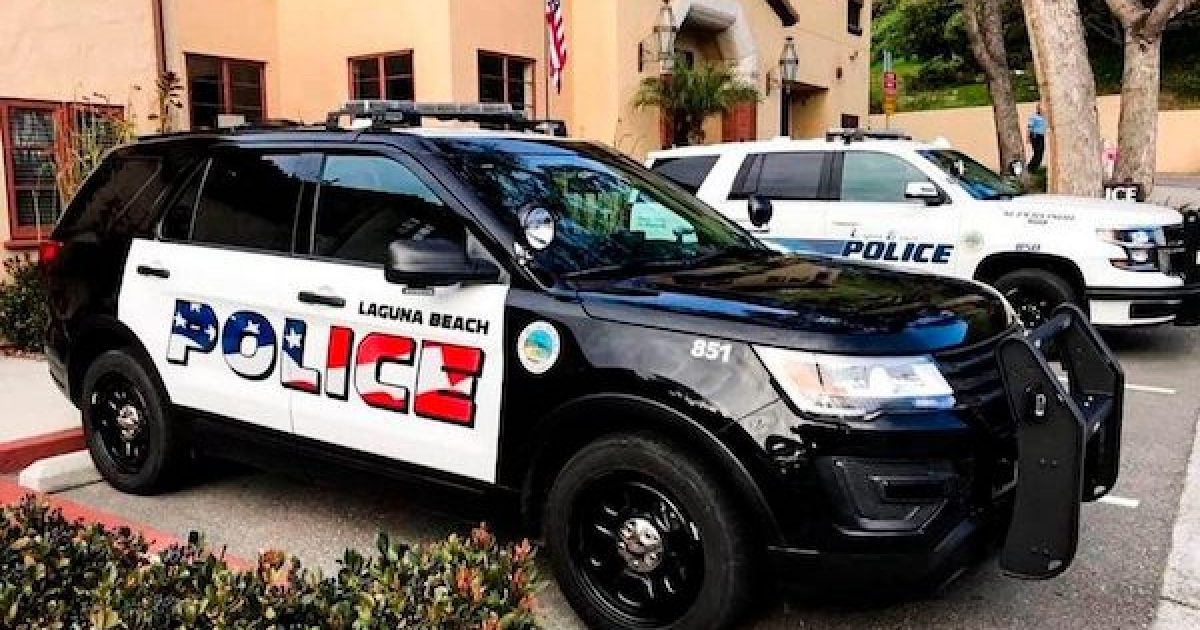 Liberals in Laguna Beach are on the attack against their local police department for a fleet of police cars with the word “police” painted in patriotic coloring on the sides.

The Laguna Beach Police Department recently fielded the fleet of cars, but some local liberals protested the markings saying the patriotic colors are not inclusive enough, according to Fox News.

Resident Carrie Woodburn, for one, attacked the police department saying that the red, white, and blue stars and stripes in the logo are “too aggressive,” and don’t “represent” the whole population of Laguna Beach.

HUH? The patriotic colors and the American flag don’t represent” the whole population of Laguna Beach? Has Colin Kaepernick moved to Laguna Beach with a group of NFL Players?

“We have such an amazing community of artists here, and I thought the aesthetic didn’t really represent our community,” Woodburn exclaimed. “It feels very aggressive.”

Are they artists from a different country?

“Folks thought it was a SWAT team, federal agents,” said Chris Prelitz, another leftist resident. “So it had a very striking, strong impact, so much so that I think there might be some unintended consequences.”

OMG, are there really people that stupid in Laguna Beach?

But local attorney Jennifer Welsh Zeiter slammed the protesters saying they are filled with hate.

“They are so filled with hatred toward this … office of the president of the United States and the current occupant of that office,” Zeiter said, “that they cannot see through their current biases to realize that a police vehicle with the American flag is the ultimate American expression.”

Councilman Peter Blake was blindsided by the complaints and even took a shot at the attackers, the LA Times wrote.

“People are screaming that the American flag on a police car is somehow or another hurting people’s feelings who might be immigrants or visitors. People are actually ridiculous enough to bring up comments about our cop cars having American flags on them,”

The city council noted that it would re-evaluate the design of the lettering, “out of an abundance of caution to address questions that have been raised about the process.”

Laguna Beach Police Cpl. Ryan Hotchkiss told Fox News that he’s heard nothing but positive comments about the new design. The department’s vehicles were previously all white but are now primarily black, with the patriotic lettering on white doors.

Perhaps there is hope for the people of Laguna Beach.  Some people on Twitter don’t think so:

Two words to those folks offended, “bite me!”

Well Laguna is in California and technically California is part of America, but…

To Bad, don’t like America or anything to do with our land, GET OUT this is crazy, but the more and more ple that come in from other countries, this is only the beginning, strange they love the FREE food homes Med Dental but don’t like the Country that they get it all in isn’t it

I hope you DO NOT have to remove it.

Couldn’t have said it better myself! People are so sensitive these days it’s not even funny!!! pic.twitter.com/4c8gXQleMW

Don is a rare liberal–he puts the love of country before propaganda.

For the liberal whiners – Stick it where the Sun don’t shine! That is an OUTSTANDING POLICE LIVERY! For the NORMAL people out there: Wave at the Laguna Beach officers as they ride by! Give them a “thumbs up”. If you see them on patrol, walk up & say, “Thank you”!

Some of this post was first seen at Godfather Politics