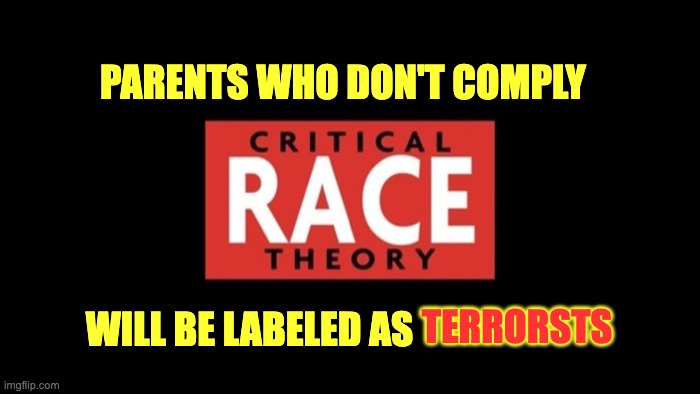 The state Attorneys General of 14 states has gathered together to sue Joe Biden’s reckless administration for his illicit investigations into parents who dared speak out against radical Critical Race Theory programs in schools.

You will recall that back in October, Biden Dept. of Justice shill Merrick Garland announced that his department and the Dept. of Education said parents that dared speak out were terrorists, and Biden’s administration was going to begin investigating them and would then send information about the parents to the FBI and local law enforcement agencies.

Essentially, Garland and Biden wanted to jail any parent who dared to speak out against the racist, anti-American, and anti-white Critical Race Theory curriculums that the radical, left-wing teachers’ unions were forcing onto American children.

Well, now the AGs of 14 states are suing to learn the full extent of this outrageous abuse of power.

On Oct. 4, Garland issued a memo on the “disturbing spike in harassment, intimidation, and threats of violence against school administrators, board members, teachers, and staff” and called for the FBI and other federal law enforcement agents to monitor activities in school districts nationwide.

Six months later, the attorneys general argue, the Biden administration has provided no evidence of any spikes in threats against school personnel by American parents.

Garland issued the memo after the National School Board Association sent a Sept. 29 letter to the Biden administration lamenting that parents were opposing the teaching of critical race theory and other divisive ideologies, referring to parental protests as “domestic terrorism.”

Garland’s memo “attacked dissent by parents during local school board meetings in an effort ‘to intimidate parents into giving up their constitutional rights to direct the upbringing and education of their children,’” the attorneys general argue.

Garland should have been instantly removed from office after calling all concerned parents “terrorists” merely for disagreeing with radical, left-wing school officials.