L.A. Times Editorial Board Thinks It Is Smarter Than The U.S. Supreme Court

Ignoring The Theory Of DUH 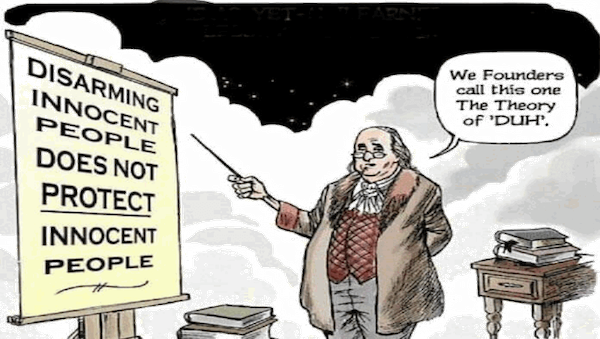 Read down almost to the end of an editorial by the Los Angeles Times blasting the ruling by U.S. District Judge Roger T. Benitez that overturned California’s 32-year-old ban on so-called “assault weapons,” and you will find the editorial board essentially claiming to be smarter on constitutional issues than the U.S. Supreme Court. LA Times or SCOTUS

The ruling in Miller v. Bonta may be read here.

“Even the Supreme Court’s controversial 2008 Heller decision,” said the Times, “which for the first time recognized (wrongly) an individual right to keep a gun in the home for self-defense, also said that the government has an interest in regulating firearms and that “the right secured by the Second Amendment is not unlimited.”

Of course, the Times would be correct if one never read the Constitution. And judging by their editorial slant, that’s a distinct possibility.

The L.A. Times editorial page has not been friendly to the Second Amendment. It is equally unfriendly to Judge Benitez, by noting the judge “was rated “not qualified” by the American Bar Assn. when President George W. Bush appointed him in 2003.”

However, according to Benitez’s profile in the San Jose Mercury News, there is more to that story. That profile recalled Utah Sen. Orrin Hatch “said one bipartisan committee recommended Benitez ‘after a thorough review of his record and experience,’ and another bipartisan nominating commission found him to be ‘highly qualified.’”

Veteran newsman Jim Shepherd, now editor of the widely-read online Outdoor Wire, wrote Tuesday about the ABA rating, “That rating, they said, was based on interviews with lawyers and judges who criticized his ‘judicial temperament and courtroom demeanor.’ Few mention that, despite that ABA rating, every sitting judge endorsed his nomination, and the Chief Judge went to Washington to testify on his behalf. Or that only one vote was cast against his confirmation.”

Shepherd also said this: “They don’t like that Judge Benitez has consistently pitched California regulations that impinge on the Second Amendment.”

Many in the firearms community—which traditionally sticks up for the entire Bill of Rights—are continually alarmed that newspapers such as the L.A. Times, which exists thanks to the First Amendment, are invariably willing to pitch the Second Amendment under the nearest bus. To paraphrase Alan Gottlieb at the Second Amendment Foundation, rights are an all-or-nothing package. The Bill of Rights is not a buffet from which you can pick and choose which ones you like and discard those you dislike. It’s a ten-course banquet. Just like the First, the Second Amendment is to be taken at face value; it means what it says, and as defined and explained by the late Associate Justice Antonin Scalia in the 2008 Heller decision, it protects a fundamental, individual right to keep and bear arms for purposes beyond service in a militia.

At the bottom of its editorials, the L.A. Times editorial board declares, “The Los Angeles Times’ editorial board determines the editorial positions of the organization. The editorial board opines on the important issues of the day – exhorting, explaining, deploying, mourning, applauding, or championing, as the case may be. The board, which operates separately from the newsroom, proceeds on the presumption that serious, non-partisan, intellectually honest engagement with the world is a requirement of good citizenship.”