Kristallnach: 68 Years Ago and Nothing Has Changed 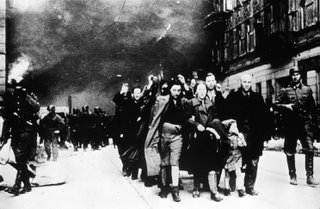 Through out the world we remember Kristallnach, the night the Nazi’s began the Holocaust in earnest. Its amazing how little has changed in almost seven decades. Arab countries children textbooks are filled with anti Jewish Hatred. Islamic Clerics call for the death of Jews. In Venezuela and Iran leaders are whipping the population into Anti Semitic fervor. Frankfort Germany’s annual book fair many of the books on display from turkey showed the worst kind of Jewish stereotypes. The Wiesenthal center has warned of major up tics in anti Semitism in the UK, France and Greece. Polls have shown that a significant part of the world population believes that the Jews were behind 9/11.

Even in the US ! College campus’ have become a safe haven for anti-semetic proffesors. This year Harvard published a paper from one of its proffesors, talking about how the “Jewish Lobby” controlled the govenment. It is no surprise that last week the FBI revealed that nearly three quarters of country’s religious hate crimes targets Jews.

Sadly it seems that in the almost seventy years since the night of broken glass, nothing has changed and very little has been learned.

Today, the Jerusalem post reported that German Nazis are taunting an 83-year-old survivor as he tries to remind the world of the tragedy that started almost a lifetime ago:

Facing death threats from neo-Nazis, one of Germany’s best-known Holocaust survivors and educators has been forced to have police install security measures at his home as attacks by the far-right in the country spiral.

On Thursday, the anniversary of Kristallnacht, Isaak Behar, 83, is to lead an annual ceremony at Grunewald railway station, in west Berlin, in which he will say Kaddish for his parents, Nissim and Lea, who were murdered at Auschwitz. A thousand or more Germans, almost all non-Jews, are expected to attend.

Behar’s parents were forced onto a train at the station on December 13, 1942, along with hundreds of others, and were sent to the gas chambers upon arrival at the death camp. A total of 50,000 Jews are thought to have been sent to concentration camps from Grunewald.

Father-of-two Behar runs Holocaust educational programs in Berlin schools, as well as within the German police service and the army. He is well known as the elder statesman of the Jewish Community in Berlin and as a delegate councillor in Germany’s Zentralrat der Juden (Council of Jews).

Behar – who is one of the few Jews to have returned to his native Berlin after the war – says he has been forced to connect his home to an elaborate security system after receiving threats from neo-Nazi groups. The city’s police have installed a complex system of buttons that trigger an emergency call when pressed. He and his wife have a button on either side of their bed, and there is one in every other room in their home.

“By night, they have played Nazi music three times on the telephone. We have changed our phone numbers three times.”

Behar added, “I am not so important like a minister that I should have three bodyguards, but every step I take I have to tell the police. If anything happens to me, they don’t want the newspapers to write: ‘Where were the police?'”

He said he was deeply concerned about the rise of the far-right in Germany. Attacks by neo-Nazis have gone up by 20 percent this year, according to police figures, with around 8,000 neo-Nazi crimes reported in the first eight months of 2006 compared to 6,605 for the same period in 2005.

“What should I do?” he asked bitterly. “Should I walk on my hands? What should I do to convince one in every five people to support me as a neighbor?”

The solution, Behar said, was education – and he said he intended to continue doing everything he could in that area.

“When I think about why I stayed in this country after everything that happened, I know that there is one very positive thing. I have made more difference on the inside than if I could have done on the outside. Now more children than ever before, both Jewish and non-Jewish, want me to tell them what happened.”

Behar survived the Holocaust by hiding out in Germany. He happened to be out on that day in 1942 when the Gestapo came for Nissim and Lea – Sephardi immigrants from Turkey. He returned to find his home ransacked and deserted. He spent the rest of the war living on the streets, in trains, and finally in the home of Communist sympathizers who loathed Hitler.

After deciding to stay in Germany instead of joining surviving relatives in England or the US after the war, Behar became one of the country’s best-known Holocaust educators.

Twenty years ago, he taught his first-ever class at a local school, hoping to educate students ignorant of the Holocaust. Word got around of the impact he was having, and more and more schools demanded his services, followed by the police and the army.

On Thursday night, as on every anniversary of Kristallnacht, Behar will say Kaddish for his family because it was on that night in 1938, as his family watched Fasanenstrasse synagogue burn from their apartment opposite, that his mother had a premonition about her fate. “We, all five of us, were looking at the burning of the synagogue and my mother was crying,” he recalled.

“My father told her not to cry. ‘They are only stones,’ he said.

“But my mother answered: ‘If these stones burn, you will very soon see people burn.’ And this she said in 1938.”

Behar continued, “I was astonished to hear her reply because this sounded stupid to me, and I said to myself: ‘I pity her. I have a stupid Turkish mother.’ I always thought I was the intelligent one. My father and mother came from Turkey, and didn’t go to school.

“Now the tragedy: Four years later, they were burned. She was burned, with her whole family. She was right. They will never leave me.”

We must continue to serve the memory of our six million. Remembering recording and teaching about the Holocaust is only part of the job. Never Again can we let the world sit and watch as genocide is commited against a people, be it the childen of Israel, the nation of Israel or Darfur, it is everyone’s job, but most of all —- it is ours!

Arsonists set fire Thursday to a Jewish school north of Paris that had been badly damaged in another arson attack in 2003, police said. No one was injured.

The overnight fire, which targeted a ground floor office at the Merkaz Hatorah school in suburban Gagny, was quickly extinguished, police said. Two other small fires were set nearby.

Police opened an investigation. CRIF, an umbrella group of France’s Jewish organizations, asked investigators to shed all possible light on the case.

A November 2003 fire at Merkaz Hatorah destroyed around 3,000 square meters (32,300 square feet) of the school. At the time, Interior Minister Nicolas Sarkozy said the arson attack had “an anti-Semitic and obviously racist connotation.”

The attack galvanized French leaders’ response to anti-Semitic attacks. Days afterward, President Jacques Chirac announced a tougher policy to combat anti-Semitism, saying that an attack on a Jew is an attack on the entire nation.

This Kamala Harris tweet about the border did not age well
April 18th, 2021 Liberty Unyielding