She Shouldn't Criticize Trump, He Could Have Put Her In Jail 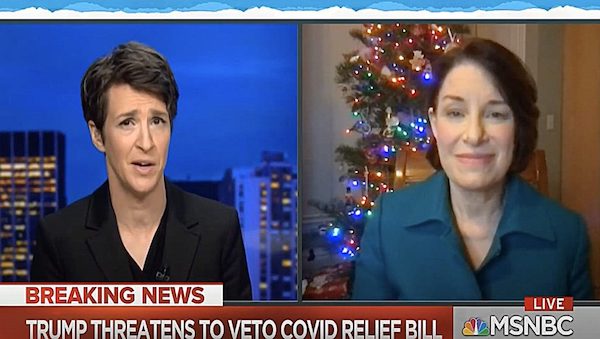 President Trump has gone to bat for the American people this week, and he’s getting some surprising praise from the left side of the aisle on account of it. Klobuchar Trump

On Tuesday night, Trump railed against the recently passed COVID-19 stimulus package from Congress, lamenting not only the massive amounts of taxpayer money being doled out to foreign governments and special interests here in the US but also the paltry $600 direct payments to the people.  Trump demanded $2,000 per person (at least), and the Democratic leadership immediately agreed.

But one former 2020 candidate from the left side of the aisle isn’t so sure.

Sen. Amy Klobuchar (D-MN) took a drastically different position Tuesday than her Democrat colleagues following President Trump’s demand for Congress to resend him a bill with greater relief for the American people in the form of higher stimulus checks, proclaiming he is “literally trying to burn this country down.”

“It is the second biggest stimulus in the history of America and for him to turn this down, obviously we have the votes to override his veto,” Klobuchar said, contending that Trump is “literally trying to burn this country down on his way out.”

She also described Trump’s actions as “an attack on our very democracy” and an “attack on every American.”

” People who are struggling to get by right now, out of work, whose unemployment, the unemployment is going to basically end the day after Christmas if this doesn’t pass,” she added […]

Klobuchar’s sentiment certainly won’t be popular with struggling Americans, who are largely in support of the larger direct payments agreed to by Nancy Pelosi and Donald Trump.

Klobuchar shouldn’t criticize the President. After all, he could have sent her to jail but didn’t. During the July Democratic Party Debate, Sen. Amy Klobuchar admitted to being a peeping Tom. Talking about President Trump,  she said, “I don’t think we should conduct foreign policy in a bathrobe at 5 in the morning, which is what he does.” How the heck did she know what Trump was wearing at 5AM?  There is only one way…the only question was which White House window is she peeping through? Did she direct Obama to put cameras put in the White House bedroom before Trump’s inauguration day? With that admission, she could have been tossed in prison. Obviously, the President let her off the hook.