Kirsten Gillibrand Has Become A True Democrat (Not a Good Thing) 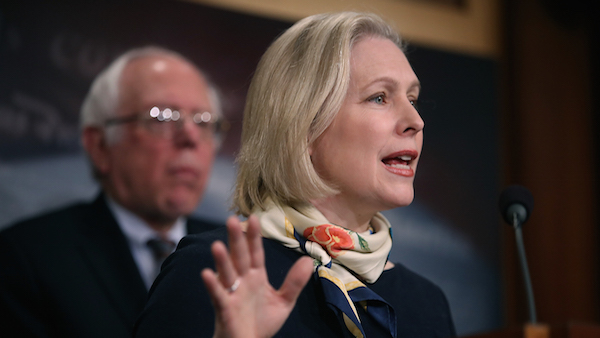 Something’s happened to NY Senator Kirsten Gillibrand. Sometime around the end of 2016, she has become a true Democrat, in other words, she has abandoned her support of Israel.

Gillibrand used to be a strong supporter of Israel.  During the 2013 Chuck Hagel confirmation hearings, she showed herself to be an advocate for Israel. But beginning this past January she began to move closer to the positions of the progressives running the Democratic Party by distancing herself from the Jewish State,  statements and votes that can be read as unfriendly to Israel and the Jewish State’s supporters

In 2013 a member of the Senate Armed Services Committee Sen. Gillibrand questioned Chuck Hagel during his confirmation hearings to be Defense Secretary, Beginning with her opening statement practically every question/statement she made emphasized the importance of the Jewish State to America. In fact, per the committee transcript Senator Gillibrand spoke 597 words in questioning Hagel, 381 of them (64%) were very pro-Israel directed questions or statements:

Four years later, beginning in January 2017 Gillibrand began to move closer to the positions of the progressive wing running the Democratic Party.

When she voted against the nomination of David Friedman to be United States Ambassador to Israel. All she said was that she was concerned about his nomination.  Therefore, it’s unknown whether her vote was motivated by Freidman’s strong pro-Israeli positions, or a support of Senator Schumer’s movement to oppose every nomination sent to the Senate by President Trump.

“The images of Jan. 21, 2017 (the anti-Trump Women’s March), show a diverse, dynamic America—striving for equality for all. The moment and movement mattered so profoundly because it was intersectional and deeply personal. These women are the suffragists of our time.”

One of those women praised by the Senator for supporting equality for all Linda Sarsour is both anti-Israel and anti-Semitic. She supports a one-state solution where an Arab majority and a Jewish minority would live together within the borders of a single country. She made clear her opposition to Israel’s existence as a Jewish state when she tweeted on October 2012 that “nothing is creepier than Zionism.”

Sarsour has also told The Nation magazine that Zionists cannot be feminists:

“It just doesn’t make any sense for someone to say, ‘Is there room for people who support the state of Israel and do not criticize it in the movement?’ There can’t be in feminism. You either stand up for the rights of all women, including Palestinians, or none. There’s just no way around it.”

Even when Sarsour’s anti-Israel history was pointed out to Ms. Gillibrand by Rabbi Abraham Cooper of the Simon Wiesenthal Center, who asked Gillibrand to reconsider her endorsement of Sarsour, the NY Senator stuck to her support of the anti-Israel activist.

At a town hall meeting with constituents in July, Gillibrand criticized Israeli Prime Minister Netanyahu, using an argument that was surprising for its ignorance.

Answering a questioner identified as a member of the “Jewish Voice For Peace,” (a group named by the Anti-Defamation League as one of the 10 most anti-Israel organizations in America) Gillibrand trashed Bibi Netanyahu based on a meeting she had with Netanyahu in 2016 as part of a Senate delegation to Israel

“In our meeting with Prime Minister Netanyahu, the question we asked is, what is your vision for peace, and he didn’t have one. He just said my only hope is that I protect my people from rockets. If you don’t have a vision, if you don’t have a plan, then it is never going to happen. And so, we do need to require more of our world leaders, and I think a call to action to Israel’s government to have a plan for peace is really incumbent on all of us.”

New York’s Junior Senator visited the Prime Minister during a particularly violent period of terror. According to the Israel Security Agency,

October 2015 saw the beginning of a wave of terrorism that has led to 620 attacks in one month, eleven people (one foreign national and 10 Israelis) were killed in terrorist attacks in October, and 80 were injured, 37 of them moderately or more severely (one foreign national, 18 Israeli civilians, and 18 members of the security forces). In November 2015, 10 people (one Palestinian and 9 Israelis) were killed in terrorist attacks. Among the non-fatal casualties, 22 were wounded in stabbings (including 5 in Jerusalem and 10 within Israel), 24 in vehicle attacks, and 12 in shootings. December 2015, saw 3 civilians were via stabbing attacks.

What would she expect Netanyahu to say? As far as outlining his vision of peace, like every single Israeli Prime Minister after Rabin, Netanyahu has supported a two-state solution and he has supported it ever since he was elected as the premiere in 2009. In 2010, he even offered to stop building housing units in communities over the green line if the Palestinians recognized Israel as the Jewish State (that offer was greeted with a no).

During his 2011 speech to a joint session of Congress  Netanyahu pointed out,   “President Abbas must do what I have done.  I stood before my people, and I told you it wasn’t easy for me, and I said, I will accept a Palestinian state. It is time for President Abbas to stand before his people and say I will accept a Jewish state.”   Later in the speech, he added, “I am willing to make painful compromises to achieve this historic peace. As the leader of Israel, it is my responsibility to lead my people to peace.” And, “You see, our conflict has never been about the establishment of a Palestinian state. It has always been about the existence of the Jewish state.

Senator Gillibrand is a smart person she knows very well about Netanyahu’s vision of peace. As a sitting senator at the time she was probably there for Bibi’s speech. This raises some questions, such as did Senator Gillibrand attack Netanyahu, to please the anti-Israel progressives who control the Democratic Party? Was she trying to please her Iranian donors (her campaigns have been supported by the Iranian American Political Action Committee (IAPAC) and by the pro-Iran lobby’s Hassan Nemazee)? Or was she unfairly trashing Netanyahu to please the questioner from the anti-Israel Jewish Voice For Peace?

Recently Senator Gillibrand flip-flopped on the Anti-BDS bill.  Originally a supporter of the bill, at the first sign of pushback from progressives she changed her mind.

When the ACLU first objected to the bill Gillibrand said she doesn’t fully agree with the ACLU’s reading of the bill. The ACLU warned, the bill could lead to U.S. citizens being sent to prison or be subjected to fines of hundreds of thousands of dollars for supporting the BDS movement, Gillibrand’s office released a statement saying that “We have a different read of the specific bill language, however, due to the ACLU’s concerns, the Senator has extended an invitation to them to meet with her and discuss their concerns.”

“I would urge Senator Gillibrand to instead add her name back as a co-sponsor for this legislation and reaffirm her commitment to opposing the international campaign to de-legitimize our democratic ally in the Middle East, Israel,

Normally this would be the section of an article where I would point out that Gillibrand has always opposed BDS and other types of boycotts. Because to be fair, she has.   But looking at her 2017 track record supporting people like Linda Sarsour, trashing Netanyahu, and opposing her own constituent’s nomination, the pro-Israel David Friedman, to be the U.S. Ambassador to Israel,  can we be sure of the real reason she is backing away from the bill? It may be the wording, but it may be that she has become a true card-carrying Democrat.