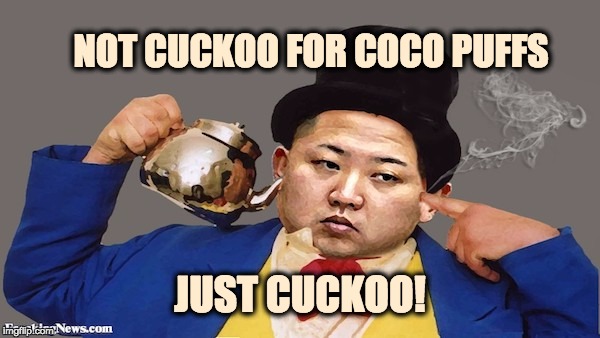 Kim Jong Un, the chubby, crazy dictator with the lousy haircut who has long worked to threaten the United States and her allies, has continued to push forward with their nuclear weapons program and ICBM testing, even in the face of a massive backlash from the international community.  Not only has the United States threatened the DPRK with action, but China has worked to reduce their trade involvement with the hermit kingdom after being dealt harsh criticism by U.S. President Donald Trump.

Now, as more U.N. sanctions have been announced in an effort to curb the desperate despot’s march toward a nuclear weapon capable of reaching the U.S. advancements,  Kim Jong Un has, predictably, fired back at the U.S. with his signature violent threats and rantings. This despite a public warning from the Chinese Foreign minister. Chinese Foreign Minister Wang Yi, met with North Korea’s top diplomat during the ASEAN Manila meetings on Sunday and urged the North Koreans to “maintain calm” despite the security council vote, and then he warned Kim Jung Un’s representative, “Do not violate the U.N.’s decision or provoke international society’s goodwill by conducting missile launching or nuclear tests,”

But that didn’t stop the cuckoo of the Korean peninsula, once again, the diminutive dictator has threatened wholesale death and destruction against the U.S. and more.

“North Korea vowed Monday to strike the U.S. with “thousands-fold” revenge after the United Nations imposed new sanctions in response to a recent intercontinental ballistic missile launch from the rogue regime.

“The dictatorship’s official KCNA news agency described the recent sanctions as ‘crimes’ that were a ‘violent violation of our sovereignty’ and a ‘heinous plot to isolate and stifle’ the communist country.

“North Korea, which consistently threatens to send ‘gift packages’ to the U.S., vowed to take ‘righteous actions’ that would make America pay ‘thousands of times.’

“The fiery response from the nation came in the face of the sanctions and as Secretary of State Rex Tillerson demanded the rogue nation halt its missile tests so the U.S. and North Korea could start negotiations.

“Tillerson made the comments at a regional security meeting in Manilla, Philippines, and offered his most specific outline to date of what preconditions the U.S. has for talks with Pyongyang. He said stopping the launches would be the ‘first and strongest signal.’”

Kim has been a thorn in the side of newly minted U.S. President Donald Trump from the inception of the Commander in Chief’s first term, with his normally ignorable threats taking on a new light in the wake of recent missile tests.

In July alone, the North Korean military successfully tested the first two intercontinental projectiles in the nation’s history, with the latter launch seemingly capable of reaching Chicago, Illinois were it sent on that particular trajectory.  This indicates a massive piece of progress for the unhinged “supreme” leader, who has long taunted the U.S. with far inferior weapons.  Now, President Trump will be forced to take action, however, there are no clear cut and concise opinions on what possible maneuver would be the most prudent.