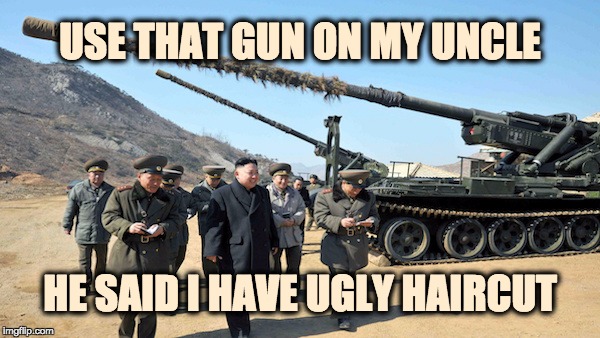 The rogue nation, who are absolutely hellbent on sending a thermonuclear device to U.S. soil, have been at the forefront of international turmoil in recent months, testing the patience of the newly inaugurated American President.  Through threats, rhetoric, and a number of increasingly effective weapons tests, North Korea has been continually pushing the envelope as to what it acceptable and ethical behavior on the world’s stage.

Now, after President Trump has vowed action, and sent a show of force into the skies over the Demilitarized Zone between North Korea and U.S. ally South Korea, chubby, crazy dictator who puts the whack in whack job.  has issued a response.

“North Korean state media sharply criticized the U.S. on Sunday for a recent practice bombing run on the Korean peninsula, calling it a dangerous move raising the risk of nuclear war.

“Sunday’s comments were reported in English by the state Korean Central News Agency; the news agency said that the recent drill increased the threat of a nuclear war.

The North Korean tyrant feeds on the suffering of others, He kills girlfriends and family members at a moment’s notice, he recently killed his half-brother, and a military leader was publicly executed with an anti-aircraft gun, and there have been rumors of flame throwers and military mortars being used for public executions. . In fact the only one in the country who seems to be safe is the barber who makes the despot look like he should grab a shopping bag and go ring door bells asking for a treat (or trick).

North Korea  may have now taken things more than a step too far.public execution of one of his most senior ministry officials China, the only nation with friendly enough diplomatic ties to both the U.S. and North Korea, supposedly has been continuously ramping up their pressure on the reclusive regime.  However, after starting to exert pressure after Chinese President had chocolate cake with President Trump at Mara Lago, they stopped. Though the employment of tough sanctions and economic pressure, China can create a situation that will be difficult for North Korea to survive without capitulating to international demands. But the question is will China follow through with the pressure?

Recently, however President Trump has expressed disappointment with China for not following through with his promises to help reign in the Chubby Korean despot. After Jung Un launched a long-range missile last week, the President tweeted, “Trade between China and North Korea grew almost 40% in the first quarter. So much for China working with us – but we had to give it a try!”

The U.S. president gave a warning to the Chinese leader as they met in Germany.

On Saturday [July 8th]here in Germany for the G20, Trump urged action on North Korea as he met with Chinese President Xi Jinping.
“Something has to be done about it,” Trump argued ominously during the brief public portion of his meeting with Xi.
There will “eventually be a success” against Pyongyang, Trump said. “It may be longer than I like, more than you like, but there will be a success … one way or the other.”
Trump’s history with China — particularly on North Korea — will be brought to bear during the Xi meeting, their second sit down since Trump entered the White House in January.

On the other hand, however, Kim Jong Un has done nothing to prove his sensibility or diplomatic capabilities, leading many to believe that an armed conflict is inevitable and necessary.

Beyond the violent rhetoric and atomic threats made by Kim Jong Un, North Korea has been employing a litany of Holocaust-style concentration camps across the nation, in which horrific and torturous conditions have been reported by the lucky few defectors who have escaped the regime.  American Otto Warmbier was recently returned to the United States after a brief time in one such camp, in which Warmbier has fallen comatose due to his treatment at the hands of North Korean captors.  Warmbier passed away soon after being returned to the United States.

Hopefully China will do its part to pressure Kim Jung Un, but don’t hold your breath.