Facebook: Advocating Mass Murder Of Trump Supporters Within Our Standards 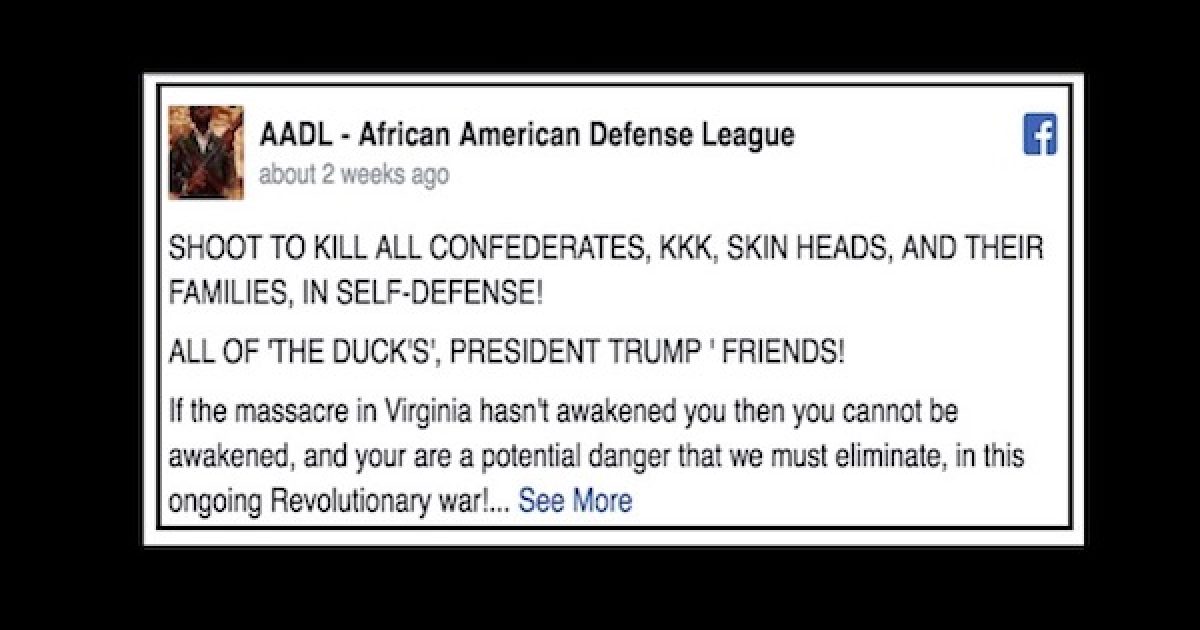 Last Thursday, we reported that the African-American Defense League, a black nationalist group founded by Mauricelm-Lei Millere, posted a call on Facebook to kill what it describes as “Confederates, KKK, skin heads” and “all of … President Trump’s friends” along with their families.

At that time, we reported the post to Facebook but were unable to flag it as violent. The social media site finally responded after some five days, telling us the post does not violate “one of” their community standards:

Thanks for letting us know about this. We looked over the post, and though it doesn’t go against one of our specific Community Standards, you did the right thing by letting us know about it. We understand that it may still be offensive or distasteful to you, so we want to help you see less of things like it in the future.

Facebook went on to advise us how to deal with the issue:

From the list above, you can block AADL – African American Defense League directly, or you may be able to unfriend or unfollow them. We also recommend visiting the Help Center to learn more about how to control what you see in your News Feed. If you find that a person, group or Page consistently posts things you don’t want to see, you may want to limit how often you see their posts or remove them from your Facebook experience.

We know these options may not apply to every situation, so please let us know if you see something else you think we should take a look at.

This, according to Facebook, does not violate their “Community Standards.”

Needless to say, if a white nationalist group had said this about Obama supporters, the post would have been removed instantaneously and the organization would be banned from the platform — and rightfully so. So why would Facebook allow the post by the AADL to remain?

This kind of double standard is nothing new for the social media site, as Adina Kutnicki, an investigative journalist based in Israel, and I document in our book “Banned: How Facebook enables militant Islamic jihad,” available at Amazon.com and the WND Superstore. [Note: I read the book and it’s really good-Jeff]

Facebook is able to skate on matters like this thanks to Section 230 of the Communications Decency Act of 1996, a 20-year-old law that a federal court said shields, online providers. In short, these companies can censor what they want — or leave up posts they wish — with zero legal consequences.

Still, one can’t help but wonder if Facebook truly endorses the mass murder of Trump supporters.

Meanwhile, company CEO Mark Zuckerberg maintains that the organization is working to remove hate posts from the site, according to an article posted at CNN Money earlier this month:

“The last few days have been hard to process. I know a lot of us have been asking where this hate comes from,” said Zuckerberg in a post to his Facebook page. “As a Jew, it’s something I’ve wondered much of my life. It’s a disgrace that we still need to say that neo-Nazis and white supremacists are wrong — as if this is somehow not obvious.”

Zuckerberg did not mention President Trump in the post.

Facebook has taken down a number of white supremacist Facebook Groups since the violence in Charlottesville, Va. over the weekend. The company confirmed it removed pages for at least eight groups, including Vanguard America, White Nationalist United and Genuine Donald Trump. Unite the Right organizers had posted an event page for Saturday’s rally on Facebook, but it was removed when the company became aware of threats of real-world violence.

With 2 billion users, the company has to carefully balance free speech with safety concerns. Facebook uses a combination of automation, human moderators, and flagging by users to screen for content that violates its community standards. Its policy is not to remove a post or page unless it supports or threatens violence. That policy is not changing, but Facebook appears to be enforcing it more carefully.

“We’ve always taken down any post that promotes or celebrates hate crimes or acts of terrorism — including what happened in Charlottesville,” wrote Zuckerberg. “With the potential for more rallies, we’re watching the situation closely and will take down threats of physical harm.” [Emphasis added]

Exit questions: If advocating the mass murder of Trump supporters doesn’t qualify as “hate” or supporting violence, what does? Or do we really need to ask?

If you would like to know more about the book, or simply to listen to the show, the player is embedded below: