Kevin McCarthy: ‘I Feel That We’re Back To 1979’ With Islamic Fanatics & Russia 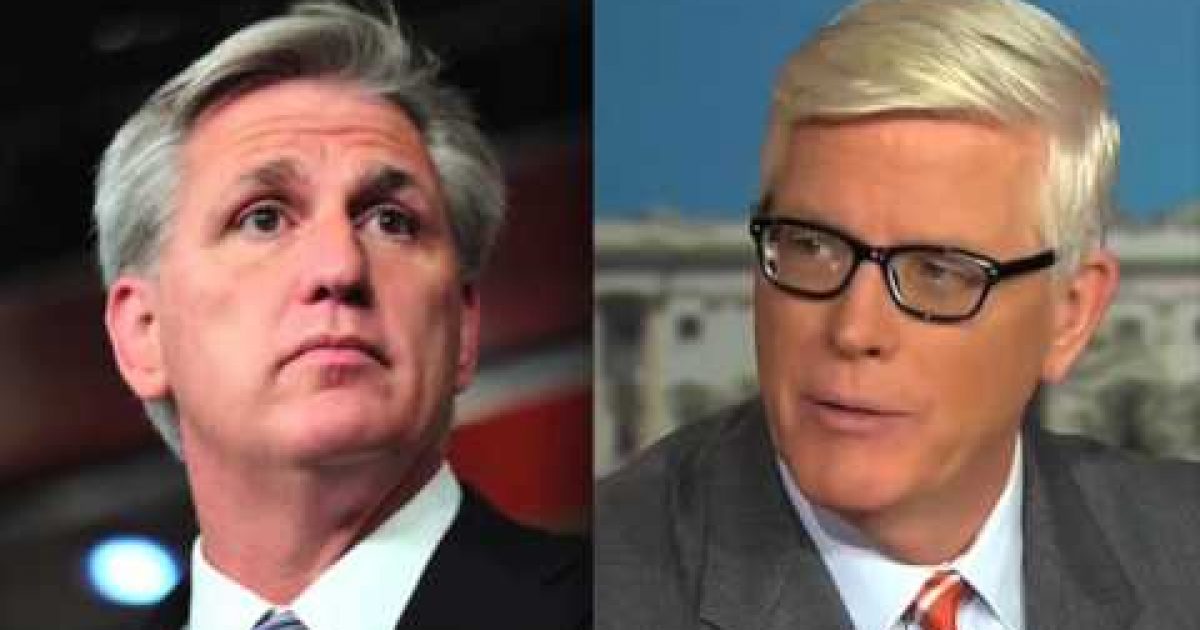 At the U.N. on Monday Russian President Putin totally outmaneuvered Barack Obama with his explanation that he had to get involved in Syria because the U.S. left a power vacuum filled with “extremists and terrorists,” setting Russia up as the guy in the white hat riding in to save the Middle East from ISIS. Later in the day he put salt in the wound by announcing a Syria-Iraq-Russia intelligence deal.

It is in that environment that Hugh Hewitt interviewed House Majority Leader and Speaker candidate Rep. Kevin McCarthy (R-CA) on the Hugh Hewitt Show Monday night about the race for speaker and the U.S.’ falling influence in the world under Barack Obama. McCarthy sees a parallel between the U.S. in the world today and the end of the Jimmy Carter administration.

Think about this. When was the last time we remember Americans being held hostage, that the Islamic fanatics overtook an embassy? It was ’79 in Iran, and they’re holding our hostages today. When was the last time we watched the Soviet Union invade another country? Well, now we’ve got Russia invading Crimea and Ukraine. When was the last time a U.S. ambassador was killed on foreign soil? That’s a direct reflection of the respect and fear that others have of our country. In ’79 in Afghanistan and today, I mean, with Stevens in Libya. And think of this. In ’79, Carter signed the SALT II treaty, but it wasn’t ratified, and Reagan ran against it. If this Iran deal was a treaty, it never would have been ratified. And all that paid off when ’79 changed in ten years – the Berlin Wall fell…

The full transcript of the interview follows and below that is an audio of the foreign policy segment.

Hewitt: Congratulations. You declared you’re running for Speaker today. How’s the reaction in the House Caucus?

Hewitt: Now you gave your first speech, and I call it sort of the pre-Speaker era, but it’s really, you’re going to be the Speaker. And you chose to talk about national security, a very conscious choice. Why’d you make that one?

McCarthy: Because I feel that we’re back to 1979, Hugh. Think about this. When was the last time we remember Americans being held hostage, that the Islamic fanatics overtook an embassy? It was ’79 in Iran, and they’re holding our hostages today. When was the last time we watched the Soviet Union invade another country? Well, now we’ve got Russia invading Crimea and Ukraine. When was the last time a U.S. ambassador was killed on foreign soil? That’s a direct reflection of the respect and fear that others have of our country. In ’79 in Afghanistan and today, I mean, with Stevens in Libya. And think of this. In ’79, Carter signed the SALT II treaty, but it wasn’t ratified, and Reagan ran against it. If this Iran deal was a treaty, it never would have been ratified. And all that paid off when ’79 changed in ten years – the Berlin Wall fell…

Hewitt: And with support from the House.

McCarthy: When America leads, the world is safer.

Hewitt: So Kevin McCarthy, when you get to be Speaker, at what priority do you put the national security issues vis-à-vis the other issues, which are stacked up, and there are many? There’s Obamacare. Obviously, there’s an EPA that’s out of control. There’s entitlement reform that needs to be gotten done. But where does Defense come?

McCarthy: Defense comes to me at the top, because you know what, I believe in limited government. You know what? I don’t need a strong EPA. I don’t need to fund a lot of money there. But if we don’t secure ourselves, and if people don’t quite understand where Iran is now getting $150 billion, and we only used to send $16 billion, where are they going to fund this? And who are these little cells that are going to be coming into America? We have to defend America and be strong. Our military is now equal to the 1940s.

Hewitt: I read the New York Times story yesterday that more than 250 Americans have gone to join the jihadists in the Islamic State. Is there any way, Leader McCarthy, that their citizenship can be revoked? I don’t even know if that’s possible via statute. But have you heard it discussed?

McCarthy: Yes, I was actually talking about that today with the Intel Chairman, Chairman McCaul of Homeland Security. You know, there has been, what, 67 arrests in America, too, because they had been working with ISIS. You know, this isn’t, when the people look at the television, think it’s just happening overseas. No, they’re coming here. Think about Paris. Think about London. Think about Washington. We have seen what terror has done. And these radical Islamists, we’ve got to do something about. And if you don’t call them what they are, but if we also don’t talk about who we are, we are exceptional, and America is good for the world.

Hewitt: Now Kevin McCarthy, I spent a little bit of the last segment giving people your bio since I’ve known you for so long in California. But on the web over the weekend, some Twitter people were questioning your conservative credentials. I want you just to take a swing at that, because I told them you were a Reagan conservative. You’ve got Reagan and Lincoln in your office. But you’d better be the one to let them know.

McCarthy: Look, I’m never afraid of somebody challenging my credentials. You know, I grew up in a family of Democrats. But I was a Republican before I could sign up. And I was a Republican, because I watched a president manage the decline of America in Jimmy Carter. I watched another guy say fly the bold colors, no pastels, and go to that shining city on the hill. I knew what he meant. That meant America. It meant about freedom and liberty. And you know what else? That light has been dimmed. So what our mission is, is to re-climb that mountain and recharge that light so it burns brighter than ever before. I chose to be in this party. I wasn’t born into it, so I believe in it. I was a small business owner at 18. And something you learn as a small business owner is you’re the first one to work, you’re the last one to leave, and you’re the last one to be paid. And I want someone in Washington looking out for those issues. That’s who I am.

Hewitt: Now what about optics, Kevin McCarthy? The conference hasn’t been terrific at optics. You’re now making a first appearance on the Hugh Hewitt Show as soon-to-be Speaker. I hope you come back early and often. But the combativeness that a lot of the grassroots wants, is that part of your agenda to communicate more, and more often with the base and with the American people?

McCarthy: Look, that is what is key. You’ve got to go out and win the argument before you can win the vote. And the one thing that’s very important, Hugh, you know what’s happening outside this Beltway. And I’m sensitive to that. I want people, I want us to be closer to who we represent. And I want the people to believe again that this is their government, that we work for them, we serve them. I can’t do that overnight, and it won’t be easy, but that’s my mission.

Hewitt: Well, good luck in that, Kevin McCarthy, good luck in getting the vote taken very quickly. Do you have any idea when this vote’s going to be held?

McCarthy: I don’t know. I don’t want to have it this week, because I don’t want it to be rushed. Let people see who’s all running, and we’re going to have a conference tomorrow, and the Speaker actually sets it, so we’ll talk in the conference and decide.

If You Are Divided And Are Fighting Amongst Each Other, You Still Aren’t Paying Attention! (Video)
April 13th, 2021 Sons of Liberty Media

The ACU Creates A Push Back Against The U.S. Corporate Wokeism Threatening Our Liberty
April 13th, 2021 The Lid