Was He Saying Biden Was Feeble-Minded? Forgot,? Or Just Kept Out Of The Loop? 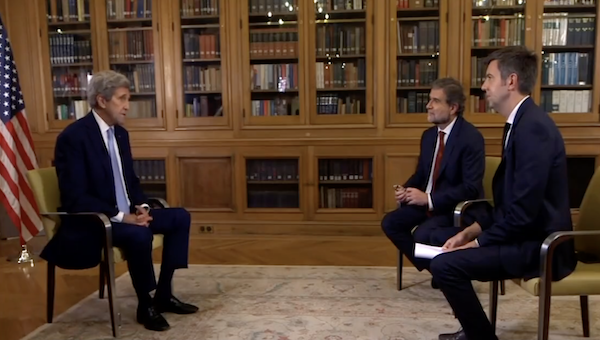 U.S. Special Presidential Envoy for Climate John Kerry told a French news channel (BFM TV) that he had to personally explain to Biden that  France was angry about the trilateral nuclear submarine agreement between the U.S., U.K, and Australia,

Kerry: President Biden asked me about it, and I told him, and expressed–

Interviewer, surprised: You told Joe Biden that it was not the right-

Kerry: He asked me. He said, ‘what’s the situation?’ and I explained exactly, uh… He was he had not been aware of that, he literally, literally had not been aware of what had transpired. And I don’t want to go into the details of it, but suffice it to say, that that the president… My president is very committed to, um, strengthening the relationship and making sure that this is a small event of the past and moving on to the much more important future.

John Kerry admits in interview with French TV that Joe Biden had no idea about the fallout with the French from the AUKUS sub deal.

"He literally had not been aware of what had transpired" pic.twitter.com/EblvE05zKg

Was Kerry saying that Dementia Joe was so clueless that he had no idea that America’s oldest ally, France, would get angry about a deal they weren’t asked to join?

Perhaps Kerry was saying the Biden foreign policy team forgot to tell him the submarine deal would anger the French because it would take business from their manufacturers?  The submarine deal led to “the cancellation by Australia of a big contract to buy French conventional submarines in favor of nuclear-powered subs built with U.S. technology.”  Or did they tell the feeble President that France would get angry, but he forgot?

Maybe Kerry was saying that once France got angry and recalled its ambassadors to the United States for the first time in history, Biden didn’t understand they were angry, or the snafu happened because Joe Biden is being kept “out of the loop.”

On the bright side, Kerry did say the two countries were moving on from the snub.

“I’m absolutely confident that the bigger issues we have to work on about nuclear weapons, about cyber warfare, about climate… We have a lot of work to do and we can’t get lost in a momentary event that I think we will get past very quickly.”

I suppose that it’s nice that the French are no longer pissed off at America.  However, it’s frightening the President of the United States didn’t understand the implications of his actions, was told the impact but forgot, or was kept out of the loop totally.

Despite that he’s been in office for less than ten months, the President has found ways to screw up our foreign policy, screwed our allies, created a border crisis, and ignited an inflationary spiral. The fact that Biden is sitting in the oval office should strike fear in the hearts of all Americans.