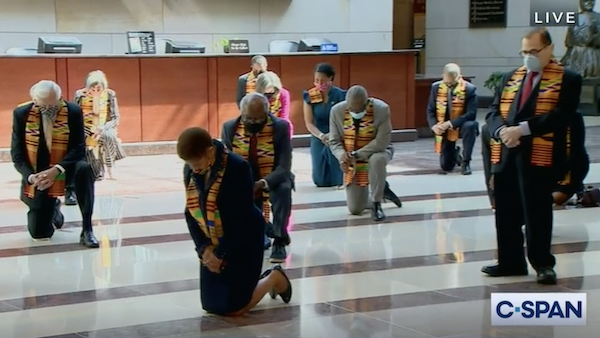 It’s only a week after chastening Trump for a ‘photo op’ standing in front of a Church that had survived an attempt to firebomb it the night before. The Democrats orchestrated a photo op of their own. They padded their ‘woke’ credentials in an election whose storyline the media is clearly desperate to fracture America along racial lines. Kente fabric photo op

Pelosi, Schumer, and others Democrats coordinated with the Congressional Black Caucus to don scarves of Kente cloth, the traditional/national cloth of Ghana is worn by several Ghanaian tribes a supposed show of solidarity with BLM … something-something racism..and George Floyd who grew up in Houston, not Ghana,

There’s just one problem with that publicity stunt. Ok, more than one, but from the perspective of a wonderful lady from Africa named Obianuju Ekeocha. She is a Nigerian who advocates against Western governments, and billionaire philanthropists are trying to import their culture, to Africa.  Ms. Ekeocha has a significant objection to raise.  Being not from the U.S., she left the kneeling aspect aside as an in-house debate. But she felt she had to “say something about the American politicians shameless and ignorantly using the Kente fabric as a prop in their virtue signaling.”

I had to say something about the American politicians shameless and ignorantly using the Kente fabric as a prop in their virtue signaling.

Obianuju does not appreciate African culture being used as empty tokenism in which to wrap Democrat’s political agendas. She respects the unique cultural identity of Ghana far too much to casually don that culturally-loaded fabric and doesn’t believe the Americans should.

Ironically the Kente fabric they are wearing for their photo op is what those same Dems would blast as demeaning and’ cultural appropriation’ if someone other than a Democrat were to play dress-up with it. And those Dems are the same people who go nuclear if anyone dared to wear a sombrero on May 5th, but don’t bat an eye at this.

Of course, the Dems have no sense of such boundaries about themselves. Or perhaps they believe the CAUSE is more significant than such trifling notions beyond their narrow scope of experience.

I’m sure?someone told them that fabric represents black people but in truth a Nigerian like me cannot lay claim to this significant fabric which is very much a part of Ghanaian identity.

Dear democrats,these colors & patterns belong to ancient tribes and mean something to us. pic.twitter.com/nuB1RPBtQA

Well, they’ve sent their dogs after me.

How this person got my personal email address I don’t know but notice he calls me “another stupid African”.

This is exactly how these people view Africans who dare to contradict them.

At this point I’ll recommend my book “Target Africa”. pic.twitter.com/aJ6jSwR9hX

Considering the email Chad Chen sent Obianuju Ekeocha, I wonder if he is related to the Florida hanging Chads from the 2000 presidential election. Considering his choice of words, it is evident that he has the mental prowess of a tiny piece of paper.

Just for fun, we’ve included some other ways Pelosi got dragged for this poorly thought-out stunt as well. If you haven’t seen it already, don’t miss Pelosi’s “I’ve fallen, and I can’t stand up” moment at the end of this whole debacle. LMAO: Nancy Pelosi Can’t Stand Up After Kneeling Stunt In Congress (VIDEO). Nancy Pelosi couldn’t get up but at least she knelt. Jerry Nadler remained on his feet. Perhaps he stayed up because he was worried that if he knelt the staple in his stomach would pop out, and he would blow up like a balloon and float away. He could float so high that eventually, his head would hit the Capitol Dome from the inside. That might give him a headache as bad as trying a false impeachment against a duly elected President and losing.

Here’s just a small sampling of the making fun of Democrats tweets, but, you get the idea:

I'm sorry that when I went on vacation that I didn't post the memes. Here ya go pic.twitter.com/JZUor4M7YQ

And for the coup-de-grace…

This is political blackface. pic.twitter.com/FEZHZeuinJ

Well, if anyone would know about politics and Blackface, it would have to be the party of Governor Northam, now wouldn’t it?

Part of this post was first seen at Clash Daily