Do Liberals Want Kellyanne Conway To Get Electric Chair Or Lethal Injection? 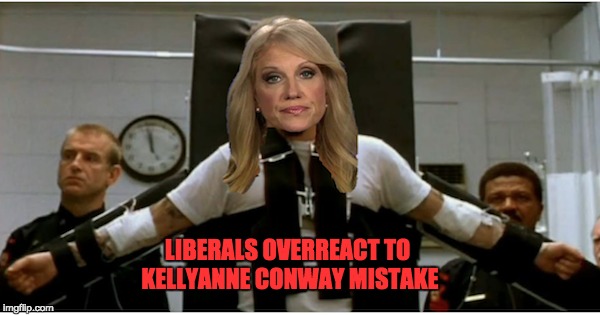 Okay, I get it, Kellyanne Conway screwed up. But the reaction, especially from the liberals has been way overblown. So overblown that it would not be surprising to see Chuck Schumer in front of the TV cameras, his glasses halfway down his nose, tears streaming down his eyes, as he calls for Conway to face the death penalty for her crime.

Ms. Conway was on “Fox and Friends” Thursday morning and she was asked about Nordstrom dropping Ivanka Trump’s clothing line, Some people believe the Nordstrom decision was not based on the clothing line’s sales but because of the politics of Ivanka’s dad the president.  Conway answered the question by praising the president’s daughter as a “very successful businesswoman” and a “champion for women empowerment,” and offered statistics about how many stores sell her merchandise.

That’s when she made her mistake, Ms. Conway followed up with an endorsement of Ivanka’s line.

“Go buy Ivanka’s stuff, It’s a wonderful line, I own some of it. I’m just going to give a free commercial here: go buy it today, everybody. You can find it online.”

Apparently Conway’s endorsement broke the law. The Federal code 5 C.F.R. 2635.702, prohibits the use of public office to endorse a product:

Conway did not make the statement for her own personal gain, as far as I can tell she doesn’t own a piece of Ivanka Trump’s company. I would suggest that she felt sorry for the fact that Ivanka was getting screwed by Nordstrom and she tried to help. Despite her good intentions Kellyanne Conway did wrong. Most probably she knew not that her endorsement crossed a red line. And it wasn’t one of those Obama-type red lines but a real one.

Almost immediately liberals began to react to Ms. Conway’s attempt to be nice.  But the reaction was way overboard–so above and beyond what was appropriate that one might have thought Kellyanne Conway was a mass murderer.

Public Citizen, a left-leaning and non-profit consumer advocacy group, swiftly called for the U.S. Office of Government Ethics to investigate Conway’s remarks. “Anyone harboring illusions that there was some separation between the Trump administration and the Trump family businesses has had their fantasy shattered,” Robert Weissman, Public Citizen president, said in a statement Thursday.

Actually the one who didn’t see a separation between the Administration and the family business seemed to be Nordstrom. White House press secretary Sean Spicer said during his daily briefing: “Kellyanne has been counseled. … She’s been counseled on that subject.”

According to CNN, the White House counsel’s office talked to Conway, not long after her appearance on “Fox & Friends.”The counsel’s office informed her that what she said on television was at odds with ethical guidelines. The official said Conway did not push back, acknowledging her misstep.

Rep. Elijah Cummings, the ranking member of the House Oversight Committee, who fought against his committees investigations of major ethics violations, such as Hillary Clinton’s emails, Fast & Furious, and the IRS targeting of Tea Party Groups, rushed a letter to the committee’s GOP chairman Jason Chaffetz to request the committee look into possible disciplinary action against Conway.

“This appears to be a textbook violation of government ethics laws and regulations enacted to prevent the abuse of an employee’s government position,” Cummings wrote.  “Since the Committee has direct jurisdiction over the ethics laws applicable to White House employees, I request that the Committee make an official referral of this matter to the Office of Government Ethics and request that it report back to the Committee as soon as possible with its findings.”

Funny I don’t remember Rep. Cummings or any other liberals calling for an investigation when Jay Carney plugged his wife’s book during a daily White House briefing (see video). When Carney did it, he got off scott-free despite the fact that it added to his household income. So why pick on Kellyanne Conway? Perhaps it’s because she is a Republican? Or maybe the liberals don’t like the fact that a woman has all that power.

Slate columnist Michelle Goldberg demanded “Punish Kellyanne Conway. Do It Now. She broke the law on live TV.” Goldberg did not mention whether or not she wanted Conway to get the electric chair or lethal injection.

Look Kellyanne Conway screwed up…and ignorance of the law is no excuse. She deserves some sort of disciplinary action…but not a major one.  These same people who are calling for Conway’s head celebrated when Hillary Clinton got off, they are happy when people who broke the law by sneaking over the border and illegally setting up house here in the U.S. uninvited, and get welfare, healthcare etc.paid for by taxpayers.

Some of these same people who scream about Ms. Conway were very happy when President Obama spent his last weeks in office, pardoning drug offenders at the same pace that drunken sailors spend money.

COME ON FOLKS! Time to take a chill pill and switch to decaf. Conway made a mistake she deserves a slap on the wrist and a warning that if it happens again she will disgracefully kicked out of her job. But anything more than that is just a continuation of the liberal attempt to de-legitimize the Trump administration.