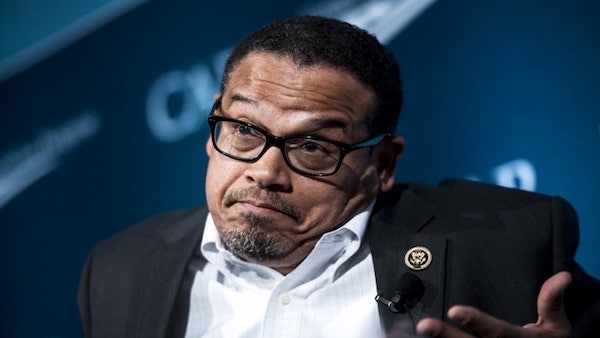 Ellison, a big-time Democrat supporter of Sanders for President, claimed he has “never seen [Sanders] supporters being unusually mean or rude.”

“Can someone send me an example of a ‘Bernie Bro’ being bad?” he asked. “Also, are we holding all candidates responsible for the behavior of some of their supporters? Waiting to hear.”

Scalise, the Republican House Minority Whip from Louisiana, succinctly replied, “I can think of an example.”

I can think of an example. https://t.co/KwuvyYgyGw

Scalise For The Win

Scalise, you may recall, was one of four victims of a shooting at a practice session for the annual Congressional Baseball Game for Charity in Alexandria, Virginia, in 2017.

The shooter was James Hodgkinson, an avowed supporter of Sanders who happened to be carrying a kill list of Republican lawmakers in his pocket as he shot up the field.

Hodgkinson was a campaign volunteer for Sanders’ presidential campaign. He asked a bystander in the parking lot if he was sure the players on the field were the Republican team. He had a list of Republican targets in his pocket. And, as Senator Rand Paul later revealed, he was motivated by GOP efforts to repeal and replace Obamacare.

Not only did Scalise provide an example for something Ellison clearly didn’t believe existed, but the absolute gall in him suggesting candidates can’t be held responsible for things their supporters do is astounding.

Almost literally, everybody who’s ever said or done anything questionable is a reflection of President Trump according to the left. Quite often, people that have nothing to do with Trump are associated with the President because they’ve done something heinous. And then there are times when people – Jussie Smollett – completely fabricate violence (allegedly) and pin it on him.

But when it comes to Bernie – oh no, he has nothing to do with his supporters’ actions.

Out Of Control Bernie Bros

Ellison’s comments appear to contradict mounting evidence that fans of the rabid socialist are out of control.

“It’s gonna take militancy,” one such individual was caught saying on the video, “like a militant labor movement that’s willing to … strike, and if necessary, you know, just destroy property and things like that.”

“What will help is when we send all the Republicans to the re-education camps (gulags),” another suggested.

In fact, Jurek is a paid campaign staffer. And his radical comments were news

KYLE JUREK, SANDERS CAMPAIGN FIELD ORGANIZER: If Bernie doesn’t get the nomination or it goes to a second round at the DNC Convention. F*cking Milwaukee will burn.pic.twitter.com/dnjymZUWQl

Even Hillary Clinton has called out Sanders for his rabid base and their actions. She suggested Bernie’s camp has a pattern of going after women noting the “Bernie Bros” online attacks directed at his competitors, “particularly the women.”

“It’s not only him [Sanders], it’s the culture around him. It’s his leadership team. It’s his prominent supporters.,” Clinton complained. “It’s his online Bernie Bros and their relentless attacks on lots of his competitors, particularly the women.”

“I really hope people are paying attention to that because it should be worrisome that he has permitted this culture — not only permitted, [he] seems to really be very much supporting it,” she concluded.

Looks like Hillary can answer Ellison’s question as well.