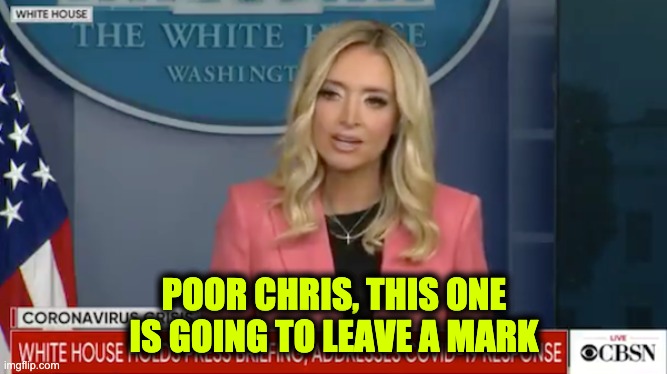 Whatever White House Press Secretary Kayleigh McEnany is getting paid, it’s not enough. After Chris Cuomo mocked President Trump for taking hydroxychloroquine, McEnany eviscerated him by pointing out the Cuomo took a less safe version of hydroxychloroquine.

The press secretary was asked to react to a statement by the American Nurses Association that they have received reports from health workers about using hydroxychloroquine as a preventative measure for COVID-19. She began by talking about some of the studies about hydroxychloroquine and followed by pointing out some of the media rants criticizing President Trump for taking the drug. After a few examples of the media’s ‘apoplectic coverage.” she landed on Chris Cuomo.

“And you had Chris Cumo saying, the President knows that Hydroxychloroquine is not supported by science, he knows it has been flagged by his own people and he’s using it. Well, Cuomo mocked the President for this and interestingly, I found this out just before coming here, Hydroxychloroquine, of course, is an FDA approved medication with a long-proven track record for safety. And it turns out that Chris Cuomo took a less safe version of it called ‘quinine,’ which the FDA removed from the market in 2006 because of its serious side effects, including death.”

Ouch! That is going to leave a mark. Where did the McEnany get that information? From Cuomo’s wife, of course. On her blog, The Purist, Chris’ wife, Cristina Cuomo, laid out what the CNN Anchor took to treat his China Virus.

(….) On top of this is homeopathy, which works according to the symptom picture. Potentized quinine (OXO); it’s derived from the nontoxic bark of Peruvian-grown quinine plants. It is a natural antibiotic (it’s being used in India with very good results). This is not on the market here; Dr. Lancaster has made this in her lab for 40 years, and I took this for my Lyme. (The medicine Plaquinol, which many doctors are using for COVID-19 is similar to quinine, but it has negative side effects.)

(…) [In his second week of treatments] OXO, increased dosage to 2 pills 3x daily. That’s because doctors are finding that quinine potentially slows the breakdown of iron from hemoglobin and the resulting oxidative stress. OXO is an oxygenating formula that works on the liver, and in turn, on the blood that passes through the liver.

Gee whiz, Chris was outed by his wife.  But Kayleigh McEnany wasn’t done. She already used Chris Cuomo’s wife to slam him, now she used his brother as the weapon.

So, really interesting to have that criticism of the President. And on that note, to Chris Cuomo, I’d like to redirect him to his brother, the Governor of New York, Governor Cuomo, who has several on the record statements about Hydroxychloroquine, saying ‘I’m an optimist, I’m hopeful about that drug. And that’s why we’ll try it here in New York as soon as we get it. There has been anecdotal evidence that it’s promising. That’s why we’re going ahead.’ And I have about eight other quotes from Governor Cuomo, should any of you have interest in that.

Caleb Hull tweeted out the video of the press secretary’s slam.

This takedown of Chris Cuomo is one for the record books:@PressSec exposes that Cuomo is a complete hypocrite for going after Trump's use of hydroxychloroquine when Cuomo himself took a LESS SAFE version of the drug after he tested positive for COVID-19.

Regular readers know that I sometimes feel bad for the Cuomo brothers. After all, the two brothers share one brain. When Chris Cuomo made the rant that Press Secretary Kayleigh McEnany spoke of today, it was probably his brother NY Governor Andrew Cuomo’s turn to use their brain. So when you watch the video of his rant below and think of what the press secretary said about it, please try not to laugh too hard. It’s not his fault that he is a biased idiot.