Az Sec. of State Katie Hobbs, Who Certifies Election Accused Trump of Being ‘On the Side of Nazis’ Multiple Times

It's Time To Release The Kraken 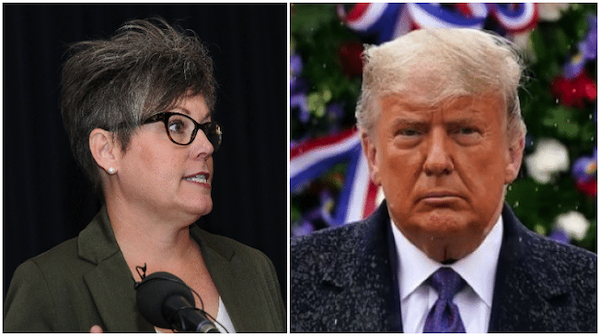 Arizona Secretary of State Katie Hobbs, in charge of certifying election results in her state, has referred to President Trump and his supporters as being on the side of Nazis multiple times. A way to get around her bias is to prove voter fraud in multiple states or, as Sydney Powell promised Lou Dobbs, “release the Kraken.”

Hobbs won her Secretary of State job in 2018 with help from George Soros.

As they stand now, Joe Biden leads President Trump by 10,377 votes, representing three-tenths of one percent of the total votes cast. Despite the closeness of the results and the reports of voter fraud all over the country, the Soros-loyal Katie Hobbs said, “We won’t need to recount presidential results.” Her rationale may have nothing to do with her political mentor. She had made many false claims about Trump’s feelings toward minorities during the past three years.

A tweet from 2017 when she was an Arizona state senator shows Hobbs responding to the Charlottesville hoax and commentary from former Senator Jeff Flake.

“The White Supremacy in Charlottesville does not reflect the values of the America I know,” Flake tweeted. “Hate and bigotry have no place in this country.”

President Trump made similar remarks about the incident, yet the media claimed he called the white supremacists “fine people.”

The President is on the side of the freaking Nazis. Don't just say stuff – DO SOMETHING!!! https://t.co/Es9ScskF58

We’ve covered the hoax in-depth on these pages. The President specifically called out the bigots at the Charlottesville rally.

“I’m not talking about the neo-Nazis and the white nationalists,” Trump said, “because they should be condemned totally.”

But the liberals and the MSM always skip that part.

Democrat Joe Biden made it clear during his campaign that he had no issue spreading the lie regardless. And Hobbs – again, the woman in charge of certifying election results in Arizona – made it clear she bought the same lies.

Because, on a second occasion, she tweeted that Trump’s supporters were essentially neo-Nazis.

.@realDonaldTrump has made it abundantly clear he's more interested in pandering to his neo-nazi base than being @POTUS for all Americans.

“[Trump] has made it abundantly clear he’s more interested in pandering to his neo-nazi base than being [president] for all Americans,” she wrote.

Certainly, that should instill confidence in Arizona voters that there will be no election hijinks taking place under Hobbs’ watch.

She thinks she’s fighting neo-Nazis. Why would anyone doubt she’d allow Trump supporters’ votes to be counted properly?

Katie Hobbs must recuse herself from the recount and allow @dougducey to choose an independent body do an audit of the vote in Arizona. The public must trust the outcome of the election and they won’t if they know someone who thinks Trump’s base = Nazis is in charge. https://t.co/yCXInC7Gou

CNN reported that Biden’s victory in that state “was anchored by Maricopa County.”

Meanwhile, the chair of the Republican Party in Maricopa County, Rae Chornenky, resigned following reports that she did not attend a pre-election test of the county’s ballot tabulation.

Checking the machines would seem to have been an important step in an election that many people feared was ripe with opportunities for voter fraud.

Senator-elect Kelly Townsend has called for a recount and a forensic audit of the election in Arizona.

“There is no evidence of systemic error in the ballot counting equipment in Maricopa County,” Fields Mosley, a spokesman for the county, said.

The fact that Fontes lost is not proof there is no fraud. A better cabinet position awaits, should Biden win. I cannot believe our own #AZAG thinks that is some kind of reliable evidence.https://t.co/YzbZcABwTZ

President Trump tweeted his frustrations this morning with the general election, something he claims was “rigged.”  Based on anecdotal evidence, he’s right, and I believe him–but his legal staff needs to produce, but anecdotal evidence doesn’t win in court.

Former Mayor Rudy Guiliani And Sidney Powell, both attorneys working on the President’s election, have promised they had the goods to prove the election was rigged and ensure that President Trump is reelected.  On Friday, Sidney Powel appeared on the Lou Dobbs program and to “release the Kraken”: all the evidence needed to convince even the most hardened skeptic that not only did Trump win the election but he “won this election in a landslide,” she said.

I pray they have the “Kraken” top release. But it’s three days later, and there is no giant squid in sight.  It’s time for them to put up or stop raising our hopes.